Knowing the ‘right’ depth to focus on is a difficult task for bass anglers, especially as they move to deeper water. Searching for bass in deep water can start to feel a little like looking for a needle in a haystack, which is probably why many anglers still avoid deep bass fishing. Spending just a few hours offshore in the abyss without knowing what depth zone to key in on can send any angler back to the bank with their proverbial tails tucked between their legs.

Fortunately, FLW Tour pro Tom Redington has found a way to zone in on the key depth range for a given fishery. Furthermore, he has a few tips on how to find more spots within this ideal depth that can help you on your next search for offshore bass.

Focus on the ‘right’ depth

As bass move offshore, Redington believes there is an optimal depth range in every section of every fishery. This ideal depth is different for every lake and changes as bass migrate. Redington has used this phenomenon to his favor in his career, racking up several high finishes in offshore–dominated tournaments by understanding the ‘right’ depth.

“The real advantage of this concept is that it makes an angler’s search easier,” Redington said. “Once I find what I feel is the ideal depth range, whether it’s in 8 feet deep or 28 feet, I can look at a lake map and specifically focus on areas in this opportune depth. Offshore fishing can be overwhelming, but this method really allows me to zone in on structure in the depths I am confident bass are using. “ 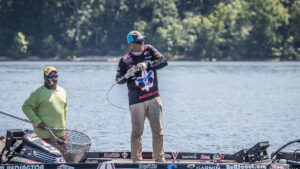 He first learned the nuances of finding the right depth during his time guiding on Lake Fork. Redington would notice schools of bass holding consistently to specific depths for a few days, only to find they moved deeper the next week. It wasn’t only one school of bass that would move deeper, though. Instead it seemed all the schools of bass in one section of a fishery would move somewhat in unison.

“This logic helped me notch another Top 10 in an FLW Costa Series event on Kentucky Lake last month,” Redington said. “On the final day of practice I found the bass were out deeper than I normally find them—26 to 29 feet seemed to be the key depth. After I figured that out, anywhere I found a creek channel junction, hump or a ditch at that depth had a good chance of having some bass on it. And by only focusing on those depth zones, I was able to find several schools of bass with less than a full practice day.”

Redington runs Garmin electronics and uses their Depth Shading mapping feature to make his search even easier. Depth Shading was important in helping Redington throughout the FLW Tour season and directly contributed to his recent Top 10.

“Garmin Depth Shading helped me tremendously,” Redington said. “I used 3-foot contours on my color shading and made the 26 to 29-foot zone yellow so it really jumped out at me. Illuminating several spots I ended up catching fishing in the tournament on that I had never even graphed, let alone fished. Contours with 1-foot intervals are extremely helpful in many situations, but they get kind of busy out deep on a complex lake. By making 3-foot contour intervals and changing the color patterns it made finding the spots kind of easy.”

Redington’s number one shortcut to find a key depth during an offshore tournament is quick, easy and can be practiced with anything from 2-D sonar to today’s modern electronics.

“The first thing I’ll do is graph a deep point or ledge that falls off into very deep water,” Redington said. “Whether it’s Lake Fork, Kentucky Lake or Table Rock, you’ll be able to see a distinct line at a certain depth where both fish and baitfish seem to be suspending. This line is usually unmistakable and for whatever reason, fish don’t want to go deeper than this specific depth zone. Where I find this line is exactly where I start my search in an offshore tournament.

“If I see baitfish and predatory fish consistently suspending in 28 feet of water, I’m going to graph structure from 25 to 28 feet deep. It’s important to understand this depth won’t be the same for an entire lake. Especially on a body of water with a clear, stable lower end and a shallow, riverine upper end for example. There will still be ideal depths in the different areas of a lake, but they’ll be different and specific to the section of the lake you find yourself in.”

Redington suggests this phenomenon occurs throughout the year but is something he uses to his advantage when bass go to their deepest haunts during the summer and winter months. Even though this shortcut has helped him cash numerous checks, Redington admits he doesn’t understand exactly why fish strictly relate to these ideal depths throughout different times of the year.

“Who knows why exactly the fish do it,” Redington joked. “Biologically they may be relating to thermocline or light penetration, or it could be water temperature or dissolved oxygen. Something definitely is a driving factor, because the consistency is there, but I won’t pretend I know exactly why. As an angler, it really doesn’t matter what they are relating to as long as I understand it happens and do my best to take advantage of it.” 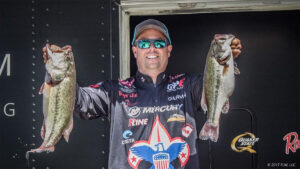 Once Redington feels he has zoned in on the opportune depth range the baitfish, bass and other predatory fish are using he employs another shortcut to refine his search for likely spots.

“I’ll look at my electronics and find structure with the most surface area in the optimal depth,” Redington said. “Whether it’s 12 feet or 30 feet, I’ll look for points, humps, channels or ledges with a lot of surface area in that depth zone. This narrows down my search to areas I believe have the highest percentage of holding large schools of fish.”

The method of finding spots with a significant amount of surface area in the key depth zone gives Redington the highest probability of finding bass in his allotted practice time.

Redington admits this method might not necessarily find you a sneaky, magic spot that no angler has ever fished before, but this simple two-step system offers insight to novice offshore fisherman and can help an angler quickly find schools of bass off the bank.