If you’re fishing right now anywhere south of Kentucky, chances are the bite is a little tough. It’s plain old hot outside and the fish are feeling the pain just as bad as we are. The water temps are in the mid 90s in many places, meaning the bass are essentially swimming around in big puddles of sweat.

But bass fishermen are still beating up on any bass they can find down here. Even if you are fortunate enough to be fishing a little farther north where the bass are still biting good, the fishing pressure is no doubt taking its toll up there as well. Bass fishing has never been more popular and we’ve never had better tools to hunt them down. So the bite can be pretty tough here lately all over.

Today, we’re going to discuss three ways to catch fish even under these pressure cooker conditions. 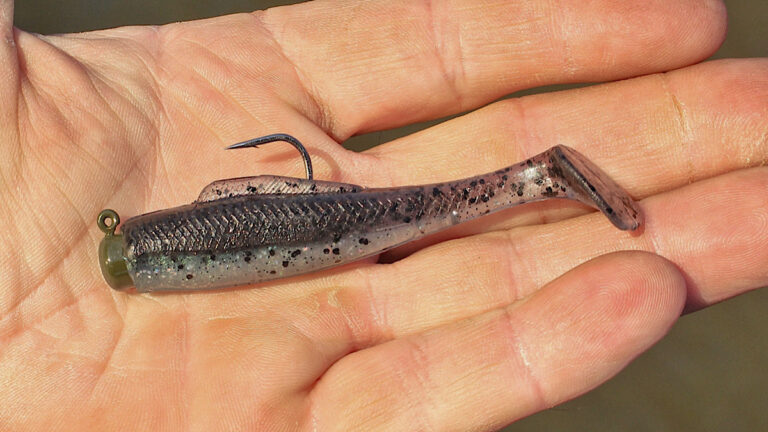 This seems obvious. When the fish aren’t biting a 10-inch worm, it sounds pretty simple to swap over to a Ned rig. Though that might be sound advice, that’s only the surface of what I’m talking about. Taking this principle to the next level, you want to find a bait that is smaller and more subtle to target fish that you’ve previously been able to catch on larger, more aggressive baits.

Here’s a good example of this.

Say you’ve been catching fish for the first couple months of summer on a Strike King 6XD crankbait. But as the water temps get hotter and the fishing pressure doesn’t subside, the bass grow wary of the same big crankbaits they’ve seen a thousand times. That’s when swapping over to a small, single swimbait rigged on a jighead can really pay dividends. Both baits mimic shad, but the latter is far better at drawing a bite when the fishing gets tough.

Even this seems obvious to a degree. But I’m always surprised by how much psychology actually plays into even my own fishing; it’s evident in situations like this. I have been on a good bite before for a couple months and have ridden that joker into the dirt. I’d go several trips without catching much as I got caught up fishing for memories, trying to force a bait that was no longer producing because it had been so productive for months.

But when I’m proactive and make the swap earlier, I’m more prone to capitalize on the new bite before other anglers make the swap and the bass start to slow down on that bait as well. Then, given this same scenario, the next step would be swapping over to a drop shot or spybait for instance as the fish begin to ease up on the swimbait. Staying a step or two ahead of the competition by even moving away from a bait before the fish stop biting it is key to getting bit in high-pressure situations. 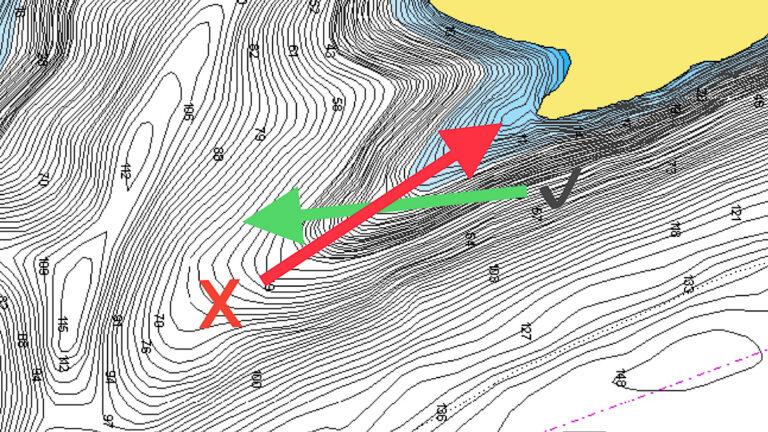 Changing your angles is another really easy way to increase your production when the bite starts to get tough. What I mean by this is that it’s a good idea to change the way that your bait approaches a fish. This will help your bait stand out when compared to all the other baits a fish sees throughout the day. Below is an example.

Say you’re fishing humps in open water that top out at 10 feet and fall to 30 or 40 feet. Most of us throw onto the shallow part of the hump and then begin to reel our bait back as we try to let it fall along the drop off. This works well sometimes but this is, again, the way the fish see almost every artificial lure fished in this scenario.

I personally believe they have a little better memory than most of us give them credit for. I’ve seen too many times over the years where bass become conditioned to baits and stop biting them as well, so it makes sense to me that they’d get conditioned to the presentation of baits as well.

So instead of fishing the hump perpendicularly, try paralleling it. This is especially helpful if you can determine that the fish are in a particular strike zone… say around 12 feet, for instance. Then you can count your bait down and keep it in the zone where it’s most likely to get bit for the maximum amount of time, while also approaching the fish from a different direction.

You can add an even more exaggerated change to the mix by moving your boat shallow on a hump and throwing out to deeper water, then reeling your bait up the drop. This is essentially what every bank fishermen ever has had to do for well over a century now and it’s still producing for them. It’s worth a shot making a few casts over a hump to try it out, I think.

Go off the grid This is my favorite way to catch them when the water is hot and the fishing pressure is at its peak. That’s when I love to go way up a creek, river or seek out some other extremely remote location other anglers are passing up because it’s either a long ways off or otherwise challenging to access. Running up a river or creek is likely the best example of this in the summer time, for a couple reason.

Given a scenario where you’re fishing a lake with a creek or river feeding into it, you’ll find the coolest, most oxygenated water way up one of those tributaries. These are the only places you’ll often find running water in the summer, which is extremely important since the gurgling and bubbling of shoals and swift spots adds oxygen to the water the same way a boat’s aerator does.

This is often the coolest shallow water you’ll find as well. So bass can find a drop of 10 degrees or more in water temp without having to swim down 20 feet to find the same temperatures, mixed with the high pressure of that much water over their heads. It usually also takes some effort to get way up these creeks and rivers and the vast majority of anglers won’t go to the trouble or invest the gas money into those long runs.

If you’ve been trying to fish lately but you’re having a hard time getting bit, there are a few things you can try. Downsizing your bait selection is definitely with a shot and changing the direction from which you present your bait to a bass can certainty help too. It’s also a good idea to do all you can to get away from as many other boats as possible and hunt up a hidey hole. It may take a little added effort to get there but that investment can make for some awesome fishing during what would otherwise be one of the toughest times of the year to get bit.