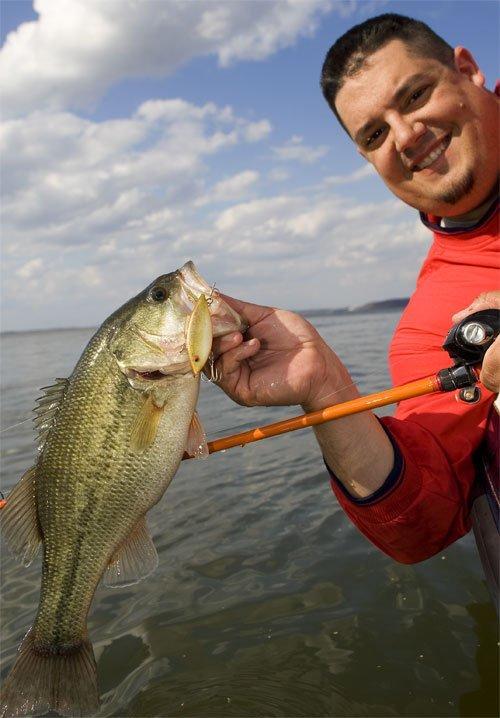 Bass fishing is heating up, literally right now in much of the country. Not only is the fishing getting better, but more people are hitting the water because a good portion of the country has gotten a reprieve from the long winter. We’re seeing temperatures in the 70s throughout the Midwest. Our northern brethren have a few more weeks probably before fishing gets going in their neck of the woods, at least for bass, but this information will come into play just the same for those in the northern climes.

As we discussed in our bait selector chart, no one bait works all the time, but there are “windows” where certain baits outperform other baits. Obviously as we get into the spring, many baits are productive, but one bait has been producing well for many years. Yet, we find that people get locked into only throwing a productive artificial one way.

A lipless crankbait is a very versatile bait that can cover a lot of water but also agitate fish into biting. What’s probably most alluring about the bait is you can literally chunk it out, wind it in and catch bass effectively. That retrieve, however, probably isn’t the most effective way to catch fish on the bait. And there are other things you can do with a rattling lipless bait or even a silent lipless bait to catch bass.

1.             Snag and Rip: Probably the most effective bass catching mechanism a lipless crankbait angler possesses is the snag and rip retrieve on grassy fisheries. Basically this involves reeling the lure just fast enough to touch the top of the submerged grass. As the bait begins to bog down into the grass, give the rod a sharp pop, jerk or snap to rip the bait free and clear any straggler weeds off its hooks. The key is not to get too far out of position on your rip, because most likely if a bass was watching, you’re going to have to set the hook an instant later. This is best performed on a medium heavy rod with a fast tip and pretty heavy line.

2.             Deflect: Deflection is nothing new with fishing lures to trigger strikes. But the focus is usually with lipped crankbaits and spinnerbaits on cover. Most people view lipless crankbaits as being too snaggy to deflect off of cover, but it depends on how you work the bait.

The key is not to let the bait come to rest behind a wooded object. If you keep tension and keep it moving, the bait runs with a nose down posture with the hooks kicked back behind it. So as it noses into cover, you can give it a quick rip and stop to get it up past the cover and then fall back. That knock, blitz and drop usually triggers some vicious strikes if a bass is around the stump or rock you hit.

3.             Bump  Bottom: In coldwater periods on highland reservoirs that don’t offer a lot of grass cover, you can reel your bait just fast enough to make it occasionally nose bottom. It’s in essence just slow rolling a lipless bait. Sometimes I do it so slow that the bait isn’t vibrating much, but every time I knick the bottom, I know the rattles inside make a slight noise.

Finesse the bait with a high rod tip and very slow turn of the reel handle. You can use a bit heavier line to keep the bait up just a hair more. A lot of times in reel cold water, the bite just feels like you caught some moss on your lure. If you feel any change in weight, lean into the fish hard. That also can trigger a strike when you abruptly move the bait from that slow subtle crawl on an errant hookset.

4.             Lift and Drop: This prespawn we’ve had some good success on steep points casting a Strike King Redeye Shad and “worming” the bait back. It’s not a high hop, it’s a slow short upward pull of the rod that just gets the bait to vibrate a little and then lower the rod about a foot as you take up slack. Then repeat. So you’re in essence slowly worming the bait down the slope without leaving the bottom very far.

I caught several bass in water temps below 50 degrees this year and had a very large bass come unhooked at the boat with this technique. Would have been my largest by far in a good while. So the hookups are not 100 percent like this, but it has been a very effective alternative to jerkbaits on the points.

5.             Add A Flash: We’ve been tweaking on our baits for suspending fish and playing with adding a tail spinner to lipless crankbait. It looks great, like the old Mann’s Super George baits, and we think this is going to be a new producer for us when the fish are suspending in tall cover like docks or trees. We’re going to fish it for schooling fishing as well.

One variation we’ve enjoyed is adding a Colorado blade on a good swivel to the back hook hanger and then upsizing the front hook one size larger to give the bait a good meaty front hook. This achieves two things we think. First, you take away those fish that have all the leverage to throw a bait that get hooked only on the back hook. Second, the bigger hook gets a better hold of the fish we feel. We’ve only caught a couple small bass while experimenting in cold water, but we’re anxious to try it in more situations.

So what variations do you employ to get five bites on a lipless crankbait? They are dynamite baits from cold prespawn temperatures all the way into the summer and beyond. They also get hot again in the fall. But the key is to do more than just chunk and wind, if that doesn’t produce immediately. The little details often make the difference with any bait.