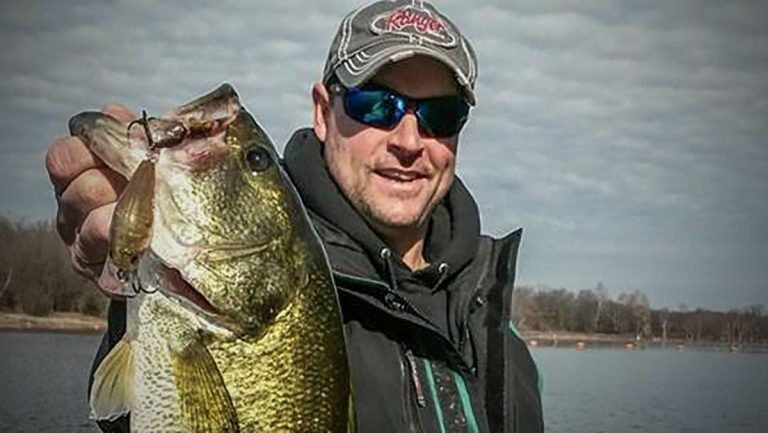 This is an interesting time of year for bass anglers. They’re chasing post-spawners in Florida while northern anglers are still drilling holes in their frozen lakes and reservoirs. Crazy, isn’t it?

Outside of those two extremes, this period can often bring warmer weather to much of the country. When these warm-ups occur, they can quickly turn the fishing from tough to fantastic and give savvy anglers some of the best fishing of the season. For that reason, FLW Tour pro Greg Bohannan thinks February is one of the best months to get out on the water. Sure, the bass are changing–but they have a hard time passing on a strategically placed crankbait.

“I absolutely love fishing in the early spring,” Bohannan said. “You’ll almost always get a couple of sunny days that push the water temperature into the high 40s and the bass will start choking a crankbait. It’s still cold, but the action can be absolutely amazing.”

According to Bohannan, the key to triggering the early season crankbait bite is the first little uptick in water temperature. He’s looking for a very specific number.

“Below 46, I’m really a jerkbait-or-bust type of guy,” Bohannan said. “Once it gets to 46 degrees though, I’m going to pick up that crankbait rod and keep it in my hand. Not only is it an excellent way to cover large expanses of water, but it also seems to catch bigger fish the majority of the time.

Throughout the winter, bass hold on classic vertical structure like bluff ends, points and standing timber. They tend to prefer vertical structure for two primary reasons–they’re able to easily slide up and down the water column to adjust to the brutal cold fronts and they can also access major forage sources.

Bohannan starts out his early cranking pattern targeting these areas, but he won’t get too stubborn on it.

“Once you start cranking early in the spring, the bass will still be on those same winter-type areas for a little while,” Bohannan said. “Once that water temp starts climbing, even a little bit, you need to be ready to move with them.”

Unlike other times of the year, it’s actually quite simple to follow these bass as they move from deeper cover and structure. They’re slowly making their way to their spawning grounds, so it becomes a matter of simply finding them on shallow-water staging areas.

“Once these bass start to make that prespawn transition, they can be found on bluff banks deep in creeks and secondary points in the back-half of creeks,” Bohannan said. “They also gang up on the last few channel bends in creeks before they start to flatten out. You need to transition with them, so if the bass aren’t where you’ve been catching them on the main lake, they’ve probably moved into the creeks.

Lost fish happen when you’re using crankbaits. It’s just part of the game. This issue can be further compounded, however, in the early spring when you’re targeting fairly lethargic, coldwater bass.

“I think a lot of times they just slap at it or they don’t have the energy to really eat it,” Bohannan said. “So losing fish can become a real problem in the early season if you don’t have the right rod. It makes all of the difference in the world.”

To Bohannan, the right rod is one with enough flex to allow the bass to fully eat the bait, as well as work as a shock absorber once the fight starts. The rod he turns to for his early season cranking is the 7-foot 6-inch, medium-heavy Denali J-2 Casting Rod.

“Flex is so important in this situation,” Bohannan said. “If you’ve got a bass hooked on a single treble hook in the side of the face, you need a forgiving rod to keep that hook buried and not lose it.”

In addition to keeping fish buttoned up, a rod with good flex also allows short-striking fish a better opportunity to get the bait, resulting in an improved hookup ratio.

“I see guys cranking with fast action rods and losing a lot of fish,” Bohannan said. “Having a more moderate action delays the rod loading up for just a split second, which increases the chances of the bass engulfing the entire lure and both sets of treble hooks.”

Another key Bohannan has found is to make really long casts, which is the primary reason he opts for a longer casting rod.

“The bass are often spread out along long stretches of rip rap, bluff walls or points, so being able to throw it far and keep it in the strike zone for longer periods of time is very important to your success in the early season.”

For early season cranking, Bohannan pairs his Denali cranking rod to a 6.5:1 Ardent Apex reel spooled with 10 pound monofilament, due to the better abrasion resistance. Fishing around rocks and timber can cause some major abrasion issues to fluorocarbon line, so he’s not afraid to go “old school” from time to time.

This time of year can offer incredible bass fishing opportunities, but remember–water in the 40-degree range is still cold. So it’s essential to slow yourself down and adopt a methodical and deliberate approach.

“You want to make sure you’re not retrieving your bait as fast as you would in the summer.” Bohannan said. “The bass are more aggressive than they were in January, but you still need to give them time to get the bait and that means a moderate to slow retrieve most of the time.”

Bohannan will also occasionally pause the bait, especially when it collides with something like a stump, rock or treetop

“A lot of times, I’ll kill it right after I hit something and that generates a lot of strikes,” Bohannan said. “I use floating crankbaits and when they see it floating slowly after it hits something, they just have to eat it. They can’t help themselves.”

It’s also important to pay close attention to the number of casts you make to each area. Unlike some other times of the year where you can cast to an area just a few times before moving down the bank, you really need to saturate areas right now. Multiple casts from multiple angles will result in more bass.

Classic cold water baits like the Rapala Shad Rap and Storm Wiggle Wart have always held a place in Bohannan’s crankbait selection, but he has put a lot of time into the development of a brand new crankbait, the Skirmish Baits A10. You probably guessed it; it’s tailor-made for coldwater cranking.

“We looked at all the other baits that are really successful in cold water and took the best attributes from all of them when we designed the A10,” Bohannan said. “I’ve only had the production models for a little while, and I can already tell you that what we’ve done works. I can’t wait to get it in tournaments this spring–it’s a fish-catching machine.”

In regards to color, Bohannan keeps his selection surprisingly simple.

“I really only use two colors when I’m cranking in the spring,” Bohannan said. “We turned them both into signature series colors for the A10. One is a green craw, and the other is a red craw. I throw the green craw in clear water and the red craw when it has some color to it.

Early season cranking is an incredible time to catch your biggest bass of the year. The big, edd-laden females are at their heaviest and they’re gorging themselves in preparation for a strenuous spawning period. If you can get on the water during a little warming trend and utilize these simple tips, you might have the time of your life.