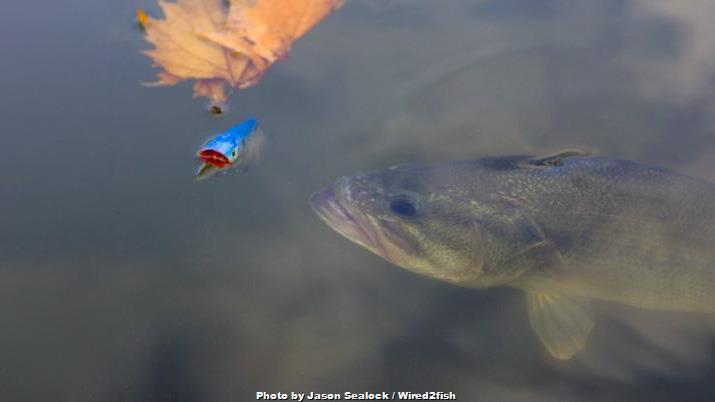 If you spend any time around the water, certain sounds are unmistakeable — the “smack” of bluegill sucking bugs off the surface, the frantic flickering of a shad spawn. A big gator bellowing deep in the swamp.

Complementing these natural sounds, one on the artificial side is as memorable: the “bloop, bloop, bloop” of a popping plug. Straightforward and simple, yet strongly resonant, the sound of a popper doing its thing is strangely hypnotic above the surface and absolutely enticing below. It’s what makes fishing a popper for bass equally effective and fun.

It may seem a basic task of tug and reel, tug and reel; however, consistent success demands more attention to detail. From the mechanics of the retrieve, to some bait optimizing alterations, a few accomplished pros offered their advice on popping proficiency. 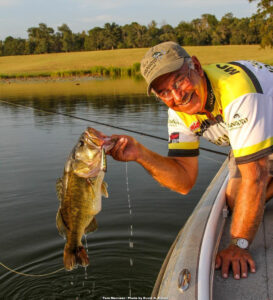 For optimal display, FLW Tour pro Tom Monsoor has developed a technique for forcing his Yamamoto Shibuki popper below the surface. The goal is to trap an air pocket in the bait’s concave face and produce a serious bubble trail that adds visual appeal to the auditory element.

Arming himself with a 7-foot, medium-action rod, Monsoor opts for a 6.4:1 or 7.1:1 reel, which allows him to quickly gather line and set the hook on a long cast. The key element here is the 12- to 14-pound fluorocarbon spooled on his reel. Contrary to the common choice of floating monofilament, fluoro’s sinking properties help guide the lure below the surface, where the act begins.

First, Monsoor holds his rod at 11 o’clock after the cast and then drops it to 7 o’clock once the bait settles. As the fluoro starts to pull the bait down, he’ll abruptly snap the rod tip upward a foot or two.

“That will make the bait dive down and make a loud pop with a big bubble,” Monsoor said. “Usually, one pop is all you need because it’s so loud.”

As Monsoor explains, that upward jerk actually enhances the fluorocarbon’s redirection of the bait’s nose to briefly pull the bait farther underwater.

Consider the physics: As the fluorocarbon sinks, it creates a dip between the rod tip and the bait’s nose. The force of that sudden rod tip motion will quickly straighten the line, but not before pulling the bait farther under water.

“It sounds opposite of what you’d think, but when that fluorocarbon sinks, no matter how hard you jerk the rod, it will not immediately pull that bait to the top of the water,” he said.

“It pops harder, digs deeper and looks more natural because it’s diving down like it’s after something, and then, it floats back up naturally.” 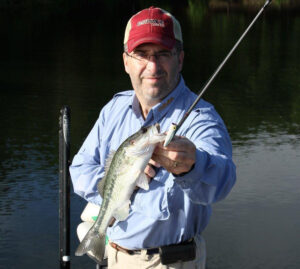 Whether he’s targeting docks during a shad spawn, temping bass over bream beds or taunting those resting in shady pockets, Bassmaster Classic champ Casey Ashley has supreme confidence in his XCalibur Zell Pop. A steady retrieve certainly tempts plenty of fish, but Ashley warns against complacency.

“You have to play with the retrieve a little bit,” Ashley said. “My first thought is to fish it fast as I can to cover as much water as I can, but that’s not always the case.

“Sometimes, they actually like it when you let the rings settle. Hit it twice or three times and let it sit again. More times than not, just a steady retrieve is best. You can throw a little pause in there once in a while, but as long as you’ve got that bait (popping), that’s the deal.”

For optimal action, Ashley replaces the Zell Pop’s standard No. 6 trebles with No. 4s, which make the bait sit lower and flatter in the water. This allows him to work the popper faster.

Ashley likes a red hook in the front position and he always wants a feather on the rear for a more lifelike appearance.

Bassmaster Elite Pro and topwater legend, Zell Rowland agrees on that backside accent and insists this adds immeasurable appeal, particularly after a missed strike. The key to getting that follow-up strike, he said, is to convince a fish that that object it just attacked was indeed a live prey item that is now wiggling and shuddering in complete vulnerability.

“If a fish misses the bait, I know where he is, as long as I don’t pull the bait away from him,” Rowland said. “He’s lying right under that bait, looking at it. If I as much as turn the handle on that reel, the feathers react instantly. They shut really quickly, and as the bait is sitting there, they open very slowly.” 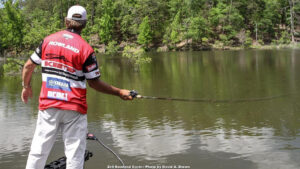 Now, hauling off and launching a bait at maximum velocity has its place in a day of fishing, but Rowland points out that this is rarely what’s necessary. He’s much more likely to use a casual sidearm cast to hit his mark on short-range targets.

Short, crisp presentations are best in stained water, while long casts serve his need to stay off the fish in ultra-clear conditions. As a matter of practicality, Rowland’s casual casting style minimizes exertion and fatigue.

Mechanically, Rowland makes a key adjustment to facilitate his style. When the short casts dominate his day, he’ll tighten his reel brake to minimize backlash regardless of how hard he throws to hit a tight target. This allows him the confidence to zip that bait into some of the most impossible spots imaginable.

“I need to put my bait where no one else’s has been,'” Rowland said. “The more I can do that, the more bites I get in a day.”

While some surmise that split rings or loop knots enhance bait action, Rowland’s strongly opposed to such mobility options. For him, a basic Palomar knot is the way to go because of the control it provides over his cast and retrieve. 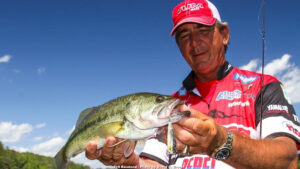 So you’ve attended to the details of appearance and presentation, and your ruse pushes a watchful bass over the edge with the typically heart-pounding explosion. Don’t reach for your cell phone too quickly — gotta catch that fish before you can selfie it.

And … what’s the most important element of catching a fish? Well, that would be not losing it, of course.
Silliness aside, the assumption that a popper strike equals a caught fish is tantamount to claiming a home run just because your bat touched the ball. Truth is, the thrill of a topwater strike — the very thing that defines our motivation — will, so often, rob us of the victory.

A lot of it is feel; a learned response borne of repetition. But if there is a one-size-fits-all piece of advice for topwater strike response it is this: Let ‘em get it. Let the fish pull the plug down before yanking back and pulling the plug out of a yet unclosed mouth.

Easier said than done when the surface opens up and gaping jaws engulf your plug. Truthfully, some may never get over that scream-like-a-little-girl reaction. (Yes, that was a confession.)

But all is not lost. Rowland says the right rod can greatly improve your hookup ratio by buffering premature responses. His custom 6-foot, 6-inch baitcasting rod features a 6-inch section of extra light tip tapering quickly into a heavy, fish-whipping butt section. Ideal for long casts, precision popping and efficient hooksets, the rod’s parabolic bend combines strength with flexibility for the ultimate engagement that concludes with another fish fooled by that familiar sound.