Umbrella rigs (commonly referred to as Alabama rigs or A-rigs for short) can be a polarizing bass fishing topic in the early spring, but it’s also a top producer in that key prespawn window as evidenced by recent tournaments around the country. The multi-arm baitfish rig merits consideration in that finicky window of the prespawn where the fish leave staging areas and migrate through more subtle areas in between wintering holes and spawning flats. Guys have been fishing them behind docks, along grass lines and through flooded timber this prespawn season to win some major events across the nation.

You won’t see A-rigs on the FLW Tour or the Bassmaster Elite Series, as both circuits have banned the them. However, most regional trails allow A-rigs, some with 3-hook limitations.

The recent Costa FLW Series Central Division event saw Hensley Powell ride the A-rig to victory, with many more claiming much of their weight in a similar fashion.

Third-place finisher Jeremy Lawyer said it best: “In the Ozarks, if you’re not throwing an A-rig in the spring, you’re probably getting beat by one.”

That’s not always the case, but whether you love ‘em or hate ‘em, A-rigs offer often-overlooked advantages for the spring bass fishing. 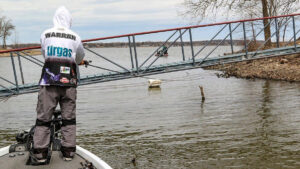 Why does an umbrella rig work so well in the prespawn? The bass know they have to bulk up for the strenuous spawn and the fasting it entails. That means gobbling as much chow as possible, so gluttony rules. Hunt down single meals, or look for pods of baitfish? “Hmmm, I think we’ll go with door number two,” said the bulging bass.

Your shad colors are usually best for the perimeter baits as well as the center “target” bait, but when anglers face stained water, like the uncharacteristically dinginess anglers found in the Table Rock Costa Series, applying chartreuse dipping or spray dye can be a deal-closer. 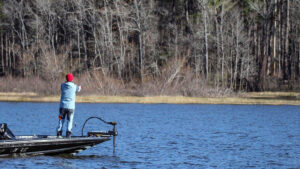 On Sam Rayburn, Toledo Bend and any lakes with hay grass, slinging an A-rig along these vast prespawn roaming areas is a good way to cover water with a presentation that’s hard to miss. Toledo Bend guide Darold Gleason adds ditches, hydrilla lines and main lake points to the list.

And how ‘bout the back deck? The A-rig can be a good way to cover overlooked open water for a co-angler fishing behind a fish catching vacuum on the front deck. Just ask Chad Allison, who kept this fish-catcher glued to his hand for three days and won the co-angler side of the same Table Rock event by more than 4 1/2 pounds.

Co-anglers typically want to do something different than their pros, so an A-rig’s really going to shine when crankbaits, jerkbaits or wobble heads are flying off the bow. 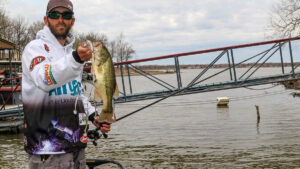 If you think an A-rig’s simply a chunk-and-wind deal, consider the value of pitching or short roll casting it toward specific laydowns, flooded timber, docks or wood jams. All of these scenarios will see baitfish huddling, so mimicking that look in areas the see a lot of Texas rigs, spinnerbaits, crankbaits and bladed swim jigs shows the fish that elusive “something different.”

On Grand Lake, Oklahoma pro Chad Warren does this a lot with an A-rig sporting Gene Larew Sweet Swimmers. Fond of pitching the rig under dock walkways, he stresses the wisdom of a controlled pendulum fall through areas that are too tight to “work” the rig.

Another Warren tip: Use jig head with hooks strong enough to handle reshaping after the inevitable snag.

Get down on it

“Low and slow” isn’t just a ribs and brisket thing; it’s also a good strategy on steeper banks where migrating bass may be hugging the trunks of flooded cover. Allison found this to be his most productive strategy on Table Rock — particularly where pea gravel banks bespoke lakeward extensions of this primo spawning bottom.

Of course, the common challenge here involves negotiating a rig with several exposed hooks through all the unseen levels of wooded snares. Simple answer: nothing ventured, nothing gained. Fish where the fish are and if you hang a deep one that one come lose, grab your line above the reel and walk your rod down to the snag for a bump release. 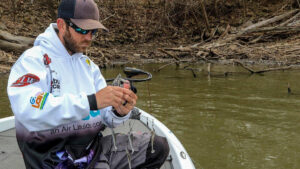 Now, some will never embrace the A-rig to the point of top billing; but I’ve covered enough tournaments to know that the savvy anglers have one rigged and ready, just in case. Case in point, Missouri icon Stacey King spent the majority of the Table Rock event targeting points with swimbaits and tubes; but he spent part of the last day throwing the A-rig in an effort to score a big bite that could push him up the leaderboard

That’s precisely what happened for Graden Hansen, who made a final day-two stop on a windy Table Rock point and caught the tournament’s biggest bass — a 7-pound, 2-ounce bass that transformed a 10-pound limit into a 15-12 limit that earned him a final-round berth in which he’d ultimately finish eighth.

Could he have done that with another bait? Sure, that’s possible. But when you need the homerun, you step up, lean back and swing hard.