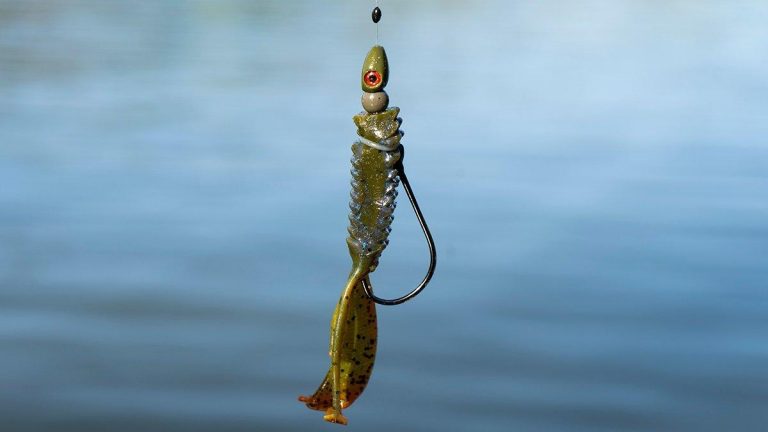 I love to flip bushes. It’s one of my favorite bites in bass fishing every year. This spring, I’ve been posting some pics from the couple of bouts of high water we had on Kentucky Lake and the big fish I caught flipping and pitching. Every time I do, I get hundreds of questions about the different things I alter or add to my flipping plastics rig. So I thought I would share some of the things I do to put the odds in my favor when it comes to flipping. 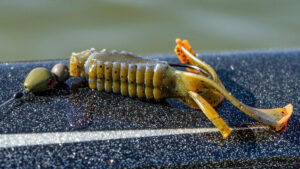 Most folks who bass fish know about pegging your weight for flipping and pitching. And a sinker stop is a critical part of flipping plastics, but I probably get asked about my bead more than anything else when I’m pitching and flipping (besides where to do it — which is coming in my next feature). I have been putting a bead between my plastics and my weight since I was a kid on the Arkansas River. Somewhere I picked up that it made a great clicker where you didn’t have to worry with jamming rattles in your plastics to get some noise in muddy water.

Every time I pick up my plastic or drop it in a bush, it clicks at the top and the bottom. So if I lift the plastic up and down in a bush 8 times, I get 16 clicks to help a bass find the bait in a big piece of gnarly cover. Push your peg up about a 1/4 inch so that your weight and bead can move a little between the plastic and the peg. Then if you want to shake the bait, lift or drop it, it clicks. 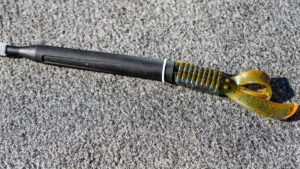 I think I learned the O-ring trick from Tom Reddington. Basically, you put the first 1/4 inch of a flipping plastic into an Wacky rigging O-ring tool and pop an o-ring onto it. Then you take your flipping hook and rig it down and under the O-ring, so the keeper pins against the O-ring. This little trick keeps the bait on the hook, keeps the nose from tearing out and splitting as easy and you can make one bait go a lot further in gnarly cover.

It’s just another way to keep your presentation efficient and help you save on baits. 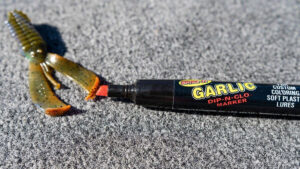 I’ve often got down in the creek on a place I’m fishing and flipped rocks looking for crawfish or checking out the shallow small fish to see if they have any orange, chartreuse or even black on them that I can add as an accent color on a bait.

I think color and scent matter most when the fish come in for close inspection and are studying the bait. This can often be the case in situations like flipping a bush. Especially if the water isn’t real muddy. You might not get bit until the 5 or 6th lift and drop in a piece of cover. And then maybe it’s just some small flash of color, a click noise or a wiff of scent that sparks that onlooking fish.

I generally just add color to the very tip or edge of a claw with a Spike It Marker or some dye, tail or sometimes just a dot on the head of the bait.

I got into trimming plastics a couple years ago. But recently I’ve really liked trimming down baits to get exactly what I want out of them. It does a number of things. One you can make a bait a better profile to get in and out of cover easier, have enough meat to hold a hook for a lot flips and still have some good hard thumping tail action.

For example, I’ve been taking a Magnum Rage Bug, and trimming it down so it’s closer to the size of a Baby Rodent. Well why not just use a Baby Rodent is the logical question. The answer is because I love the thicker body of the Magnum Rage Bug. It holds a big flip hook so much better. I can keep that awesome tail action, give it a narrower profile, trim the end down so it streamlines better into my weight, and voila — bass candy.

And I’ve noticed as you can see in the pictures, that trimmed up bait can display colors differently than they look on the outside of a fully formed plastic. I love how the Strike King Blue Craw looks when you cut into it. Much better I think than its outward appearance because the good stuff is injected into the bait. 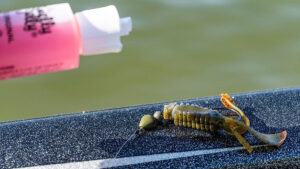 I still believe in scent. But like the color accent, I don’t think scent calls a bass from 20 yards. I think it’s a trigger to a bass that’s already in close proximity debating whether to strike or not. I also know for certain that an oily bait slips in and out of cover better than one that is tacky. So add a drop of scent to slick the bait up and hopefully close the deal in that piece of cover.

Scent is a funny thing to get into because no matter what I try, I end up getting that fishy smell on me somehow and it’s pretty hard to get rid of. I think Smelly Jelly works well as do some others like JJ’s Magic. The key is finding a way to get scent on there without getting it all over everything. Or leeching out into your boat or tackle bag. I keep mine in ziploc bags in  a small compartment. I like to just dab a drop over the side of the boat.

These combinations are from years of knowing what triggers I want to stimulate in a bass that is deep in a piece of cover. A subtle noise, a flash of color, a little scent or just something for convenience sake to get me 50 more pitches where I’m not down in the boat re-rigging as much. 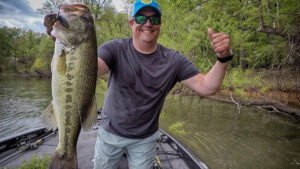 The other big question I get asked is about where to flip when everything is flooded. I discussed reading cover in a previous piece, but in my next flipping feature, I’m going to expand on understanding how cover lays in the bigger area to pattern where to go to flip and pitch in flooded cover to be more efficient with limited time on the water. 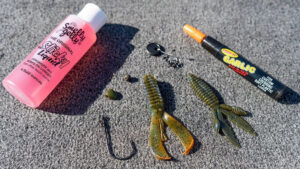