Apparently power fishing is the macho thing to do these days. Lots of guys like to pound their chests like a silverback gorilla when they proclaim to the world that spinning rods are, in fact, for sissies.

Y’all can keep thinking that all you want. This time of year, I’m going to keep 8-pound test in my hand and try to catch over 50 keepers per day. I’m not fishing the Bassmaster Classic. I’m not filming a TV show. I just want to have fun and feel something pull back.

Here are four reasons I think you should fish weightless for the next month or so, depending upon your location.

Post-spawners can be a booger to catch. But you can’t really blame them when you think of what their bodies have recently gone through. When they’re done with all the romance, there’s a window in which those big females will suspend a foot or two underneath the surface and just hang out. They’re worn out and letting their bodies recover before focusing on the impending bluegill spawn.

Now let’s quickly talk about the post-spawn males. Once the females’ eggs hatch, those males will protect the fry for a period of two weeks or more depending upon water temperatures. You’ll often find these smaller males suspended underneath their balls of fry on dock posts, green bushes or grass edges. These males are the dumbest fish in the lake and will lose their collective minds over a weightless soft plastic bait.

Bass like to feed upwards. Biologists say it until they’re blue in the face: A bass will rarely lower itself in the water column to eat something. Add the fact that these paranoid fry guarders are keeping an eye on the babies from below and my answer is simple: I want something that’s going to fall slowly and stay in that strike zone for as long as possible.

I consider the optimal strike zone for a suspended bass to be the one or two feet between its eyeballs and the water’s surface. 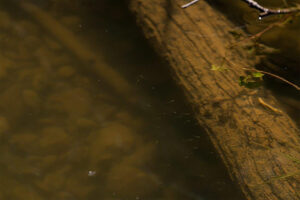 No. 2: Quiet entry is paramount

These post-spawners—both the males and the females—are skiddish. More times than not, you’ll see them before you make your cast. I’d be willing to bet that 90 percent of the bass I catch this time of year are a direct result of sight fishing.

With that being said, a big splash or aggressive skip from a jig or Texas rig can and will spook these bass. Even if you’re an expert at casting, the sheer bulk and profile of conventional flipping and pitching baits can significantly hinder your chances of catching ‘em.

Is it possible to catch them on a weighted presentation? Sure. But I believe you’ll fool more bass with a subtle profile.

This is another big reason I tend to rely on weightless soft plastics during this period; they enter the water like an Olympic diver. The sound and pressure waves of these baits skipping on the surface are just enough to pique the bass’ interest, but will rarely spook them.

I hear that all of the time during the post-spawn period. That’s what makes long-distance skips such a big deal. I can skip pretty darn well with a baitcaster, but I’ll get twice the distance with a medium-action spinning rod and 8-pound fluorocarbon. If you get too close to these fish, they will not bite.

Both male and female post-spawners will suspend in some pretty precarious places. The females want to be left alone and the males will make sure their fry are in the deepest, darkest shade imaginable in order to better shield them from potential predators.

Even a novice angler can quietly skip a weightless soft plastic after a few hours of practice. With little effort, you’ll be able to softly place your bait underneath trees and back-corner dock posts. Remember: The strike zone is small right now, so accuracy is key. I’m always aiming to get my bait within a foot of these bass. You’re asking a lot if you’re expecting a post-spawner to swim five or six feet to come eat your bait.

I’m a firm believer that the majority of post-spawners aren’t eating your bait because they’re hungry. They’re eating it because they want to get it out of their face. It’s just like someone holding their finger in front of your eye—the longer they hold it there, the better likelihood of you getting ticked off and swatting it away.

That’s exactly what weightless soft plastics do to a post-spawn bass. You can keep these baits right in front of their face and tick them off. Essentially, you’re annoying them into swatting your bait away.

Because a weightless soft plastic sinks so slowly, you’ll be able to watch the bass eat them. If you’re not paying attention and wait to feel the bite before setting the hook, you’ll miss a lot of fish because they’ll spit it out.

I recommend not getting in a feeling contest when you see ‘em eat your bait. As soon as you see them flare their gills and your bait disappears, set the hook. This will allow you to get them out of the cover (remember, you’re using light tackle) and 99 percent of the time, you’ll catch that fish.

There’s no need to go crazy and overcomplicate this technique. I’m just speaking for myself here, but my setup is incredibly simple.

Here’s what I use:

Baits: During this fry-guarding stage, you only need three types of soft plastics: Stick worms, soft jerkbaits and floating worms. Leave the rest at home and make yourself use these baits. For whatever it’s worth, I use stick worms most of the time.

Rigging: I wacky rig my stick worms on a No. 1 VMC Neko Hook. That hook is unbelievable. I’ll Texas rig my soft jerkbaits and floating worms with a light-wire 3/0 Offset EWG Hook. The lighter wire helps it fall slower and aids in hook penetration when making long-distance hooksets.

Colors: Bluegill are on the menu this time of year, at least in my neck of the woods. I’ll use watermelon red almost exclusively. If you don’t have that color, don’t worry. Anything green that remotely resembles a panfish will work.

Rod: A medium-action rod will load excellently and allow you to put your bait into tight places. I’ll use anything from a 6-foot, 9-inch to a 7-footer. Whichever one is spooled with fresh line.

Line: 8-pound fluorocarbon. I do not use a braided main line anymore because I don’t like having an extra knot to worry about. Also, you’ll have to retie your fluorocarbon after most of your fish catches because they’ll wrap you around all sorts of junk. Instead of re-tying short leaders throughout the day, I just don’t mess with it. I’ve been using straight 8-pound Seaguar Tatsu and it behaves quite well on my spinning reel.

Reel: I’ve fallen in love with my 2500 series Daiwa Procyon EX Spinning Reel for this technique. It’s reasonably priced and smooth as silk. Whichever reel you use, just make sure it has a great drag system because these big fish will take you for a ride with light tackle.