The morning started off like any normal guide trip on the famed fishery. With the events of the last year, Falcon has had a real down turn in guide trips and fishing pressure though, and the result has been an incredible bass fishering being improved as evidenced by the events of Friday, Jan. 7, 2011.

Tommy Law of Outlaw Guide Service was guiding Jeff Archie and his wife Stephany of Tennessee for big bass. Jeff’s first fish of the morning was the fish of a lifetime for most of us. His 13-pound even bass would also be considered a Share Lunker in the Texas Parks Wildlife Division’s Toyota Share Lunker program. They photographed the fish and let her go. A testament to fishing ethics in and of itself.

They boated another 7-pounder there as well but Law noticed Stephanie wasn’t catching the big ones, so he decided to switch areas of the lake and made a big run about 20 miles. Their first stop after the run and Stephany boated three bass pretty quick.

“A buddy of mine called me and said he had a giant bass he needed weighed,” Law said. “So we waited for him to arrive. We weighed his brute at 12 pounds, 14 ounces.”

That convinced Law to move to a spot where he’d had a near 42-pound limit the week before. When they arrived they found the big bass loaded up on the spot. Stephany lost a 9-pounder that jumped and spit the bait. They caught several good fish though, and when it got to be quitting time, Law figured he’d make one more cast, not knowing it would be so significant.

“I was Texas-rigging a soft plastic in about 18 feet of water that dropped off in to 25 feet when I felt something a little ‘mushy’,” Law said. “So I set the hook. It didn’t even move for a second or two, then all heck broke loose. The fish came up and surfaced and I knew it was a 13-pound class fish.

“Jeff grabbed her and pulled her in and I knew we had another Share Lunker. I put her on the scale and it said 15-pounds, 9-ounces. I thought my eyes were playing tricks on me so I asked Jeff to read it. He said the same thing so we called James at Falcon Lake Tackle and he and TPWD officer met me at the ramp to weigh and certify the fish at 15.63 pounds.

“The old record was 15.12 set in 1991 and that fish was ugly. This fish did not have a mark on her. The best part was we released both our Share Lunkers and both swam away healthy and strong. Our best five today would have weighed 47 pounds, 9 ounces.”

Jeff Archie holds up his 13-pounder from Falcon Lake


Another shot of 13-pounder 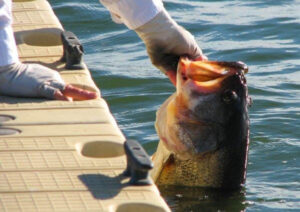 
The catch of a lifetime!