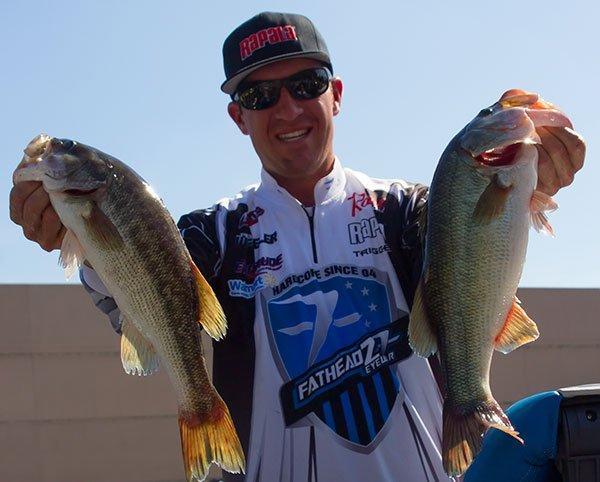 Jacob Wheeler won a tournament in a way no one thought before hand would be the way to win on a dominant spotted bass fishery. He found an area all to himself and milked it for 20 bass that put him well over the top in this tournament. But as anglers we think it’s important to recognize the factors that came into play in this tournament. Tournament bass fishing is a lot more than lures and areas.

The Forrest Wood Cup visited Lake Lanier two years ago but under very different conditions. High sun, flat waters that were then stirred and made rough by boat traffic. The lake was higher which put more grass in the lake in the shallow areas. It would seem the shallow largemouth patterns would have been better. But that wasn’t the case. The deep spotted bass dominated and guys who ran up the rivers lived and died up there. Ronald Hobbs made the top-10 cut in 2010 fishing nothing but shallow largemouth, however he failed to catch a keeper bass on the final day.

Ott Defoe ran up the river the first day and caught 13 pounds and was in the hunt but after blanking on day two, he was out of the tournament. Defoe fished the area that basically won the tournament for Wheeler two years later but it was still a gamble after seeing what happened to Defoe.

What having the same tournament on the same venue did was convince a good portion of the field that what happened two years ago was what was going to happen this year. So guys that would normally go shallow no matter what, decided they had to be out deep to be competitive. That put a lot more pressure on the fish in those places but it wasn’t the only thing that added pressure. More on that in a second.

Guys like Andy Morgan were disgusted with themselves. Morgan didn’t pull a spinning rod out all year on the FLW Tour, but then focused almost exclusively on fishing deep with spinning gear in this tournament. A hard lesson for any pro but one that will make him a lot tougher in future championships. “This will be a good lesson for ole’ Andy,” he said about his preconceived decisions.

It’s no secret anglers get insight from locals on various venues in pre-practice. This is more apparent when the conditions are tough on a given fishery and especially in championships. It seems pros have more time to ride around with locals and find out the hot community holes. And locals are usually all too willing to show anglers other locals favorite haunts.

Whether you agree or disagree with the practice, it’s how fishing has become. Some pros don’t get any help at all and still do well. In fact, where they shine are when the conditions change drastically during a tournament. Other pros, however, might get a point in a right direction and then find their own stuff in the real practice. Another good option that can help you adjust on the fly.

But the local effect comes into play when you start seeing anglers playing round robin on the same 10 spots in one section of the lake. So those bass are then spread out among several guys. The guys fishing deep brush and trees with a drop shot might only get a shot at one bass per pile or tree. If you come in behind Cody Meyer or Brent Ehrler in the rotation on the same spots, what do you think your odds of catching fish will be. So actually being shown the same things as others on a lake hurts the most in these situations.

Sun, wind, rain, current, water clarity, temperature and more all impact fishing on any giving fishery. The more the conditions change from one extreme to another, the more anglers have to adapt on the fly. That can be hard to do when you have a strong practice doing one thing in one set of conditions and don’t get those same conditions throughout the week of an event.

Sunday of practice for the tournament, we contacted several pros and the stories ranged from a good day to being on the winning pattern and group of fish. The old adage of winning practice came to mind as we heard how good the fishing was for many pros. It was sunny and the water was flat except where boat traffic was making big waves. As the practice period progressed, the clouds came in and out and anglers were starting to get a taste of how tough the deep bite could be.

By the time the tournament started, rain and fronts were moving in and out of the area and the sun, although it did come out some, was an afterthought. The sun might seem like a hindrance in a hot summer tournament but it was actually beneficial in this event on Lake Lanier for a number of reasons.

The sun not only drove deeper bass down closer to the deep brush piles and trees, but it also put the shallow fish around more hard targets. It also gave these fish a better bead on the artificial lures anglers were throwing.

“These fish on this lake are visual feeders,” said Wesley Strader who found the bass crushing topwaters on sunny days and completely missing it on overcast days. “They see your bait from a long way and swallow it on those bright days. But when it gets overcast, it’s like they see the commotion but can’t find the lure and just sort of roll on it.”

The first three days of fishing saw mostly clouds with a little sun. Some guys were able to capitalize on the small windows of sun while others struggled. It became clear early that there were fish shallow on both ends of the lake, but Wheeler’s nearly 22-pound limit took the wind out of a lot of sails. He actually caught three of his biggest bass on reaction moving baits like vibrating jigs and topwaters, playing the clouds that were making the fish roam.

Meanwhile some good limits were caught around some brush deep on drop shots and other baits. As the week played out those fish were picked off, and the ones that remained got way high in the water column away from the brush and made them much harder to target effectively.

Lanier isn’t like other fisheries on say the Tennessee River. Some lakes have an overabundance of forage. Lanier has a lot of bait but it doesn’t have a lot of shad compared to other fisheries. You have blue back herring that can cause bass to roam and meander over 100 feet of water not relating to anything. There are things like glass minnows that stay shallow, but a major forage base for the bass on a lake like Lanier can be bream or bluegills.

Several of the top finishers, including eventual winner Wheeler, found the bream bed pattern and actually found several big bass just “hanging out” around them.  This pattern won’t be found on all lakes, and it also makes a plan like running way up a river feast or famine depending on the fishery.  If you run way up a river and the forage isn’t up there, you’re not going to find many bass.

However, Wheeler found many bass in a small area, and they were easy to target. He was able to cast to isolated targets and catch bass feeding on bait in not only current but also around old bedding areas. And because of preconceived notions by his peers, he was able to keep the small area mostly to himself.

Adjustments make or break anglers on the water in multi-day tournaments. Bass fishing pros get to the highest level based on their decision making skills as well as their prowess for making leery bass bite. It wasn’t enough for Wheeler to have a hot area up the river. He also had to catch those fish, and if they didn’t cooperate, he had to be smart enough to go to his backup stuff down lake and not just die up there.

The first day he was able to catch the tournament’s biggest limit with reaction baits. The second day there was a bit more sun, and the fish had to be caught flipping Trigger X plastics to specific targets. He also picked up a few larger fish down lake on some bream beds with his topwater prop bait. On day three, the fish were already accustomed to the prop bait, so he changed the profile with the more slender Rapala X-Rap Prop. By the final day he knew what he had to do, and he stuck with his flipping baits and his topwaters to get the job done.

Those small adjustments every day are what lead champions to victory. The fact is we’ll never know everything about bass. We’ll scratch our heads as much one day when we can’t make them bite as we pump our chests the next day when we sack them up. But it’s always interesting to hear the psychology and conditional factors that come into play on figuring out the fish on a body of water. For us that sometimes is more interesting than the lure they used.