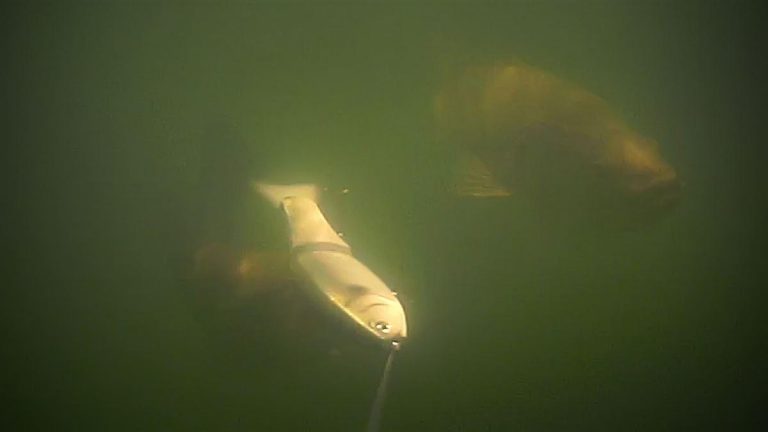 After spending a couple of weeks prepping and reviewing all the new fishing tackle for 2018, I was genuinely interested in studying fish reacting to lures. How fish react to lures is the most important thing you can learn in fishing.

While looking at fishing tackle at ICAST is very cool, I pride myself in being the guy pro anglers call to ask if a certain bait is worth it or not because I’ve probably had it on the water already. After 20 years of studying more fishing tackle on the water than most will ever see, I’ve gotten pretty good at figuring out if a lure will be a solid fish catcher or not. But knowing a lot about fishing lures doesn’t catch more fish. Knowing how bass react to them does.

After ICAST, I headed over to Table Rock Lake for some rest and relaxation with the family. Being that close to a good bass fishery, however, always proves too tempting for me. This year I did spend a little time fishing in the early mornings, but I was more interested in studying fish I could see in clear water, either physically with my eyes and a good pair of polarized sunglasses or much deeper with an underwater camera.

The science of fishing

While I’m not a scientist or biologist, I do apply scientific methods to better understanding fish and more importantly their reactions to various things. Google defines science as “the intellectual and practical activity encompassing the systematic study of the structure and behavior of the physical and natural world through observation and experiment.”

Relative to that definition, what is fishing? I would define it as a systematic study and observation of the fish and their habitat and behavior through experimentation with various lures and accompanying techniques.

I’ve never thought of fishing as random or luck. While there is a degree of luck because I never know if a 2-pounder or a 6-pounder is going to bite on a given cast, you don’t get lucky tens of thousands of times in predictable spots with predictable lures at predictable times. Kevin VanDam doesn’t win 24 times randomly while many other anglers haven’t won once. That’s born from experimentation in certain repeatable situations and conditions through various seasons. For example, I can pull up on the same ledge the second week of June and catch bass after bass for an hour. I can’t do that necessarily every month of the year, but I know at that time of year in that situation, the fish are going to be there and most importantly REACT a certain way.

Does it ever get old? A few Whopper Plopper blow-ups to get you through to the weekend! – Jason #fishing #bassfishing #topwater #whopperplopper #plopplop #plopperOG @_river2sea_

What I observed at Table Rock was fairly eye opening. And it’s the part of fishing I find more and more fascinating. It also gave me a new appreciation for why VanDam has won 24 BASS events and Aaron Martens is always a threat to win one. Those two guys have really honed their skills for getting fish to react when many presentations barely garner a look from bass in an area for other anglers.

I’ve shared a boat with both VanDam and Martens on numerous occasions, and I feel like their ability to react to fish behavior puts them in a class by themselves. It’s one of the reasons I try to spend time every year just watching fish react to lots of different lures and presentations.

On Table Rock, I took some of the staple lures there and put them behind a camera on the line. Things like underspins with small soft plastic jerkbaits, small swimbaits and even the now popular spy baits. While those baits are normally money there and they got some bites that week, I learned a lot more by being more aggressive with presentations and even the size of lures.

You might have seen the videos and photos I posted on our Instagram page of fish reacting to topwaters, Senkos and big swimbaits. The big swimbait footage was especially telling in the video above. I ran my camera through an area that was holding a lot of spotted bass I found on my Lowrance Carbon graph.

While I had the smaller more finesse lures on the camera, the fish would follow from a great distance and never commit. But with the large swimbaits, the bass followed, reacted, struck and rolled up on the bait a lot more frequently. The more aggressive you could be at that depth, the more fish you could get to react.

I also found success skipping a Senko around where I had seen bass cruising “aggressively” around shallow areas where bluegills were present.

When I say aggressively, I mean I would see the bass not just swim slowly along, but they would speed up and make what I call “hard turns.” If you have fished for bass on a bed, you know when you shake that lure on the bed, and the bass whips around real quick, it’s just a matter of time. They will do the same thing when aggressively pursuing bluegills in the summer after the bluegill spawn.

I got several big strikes the first morning on the larger topwater. That gave me a clue as to the behavior of those shallow bass. I was able to come back to those areas later and skip a Senko up there and let it settle. Then I would give it a pop or two, and every time I got a bite, it was right after that dart of the bait. I envisioned a bass cruising a likely area, and making that “hard turn” when it felt something dart nervously around it.

Adjust your presentations to reactive behavior

The fish I found out deep with the camera were of particular value in my discovery. Seeing 2-4 pound spotted bass dart in and chase and snip at the tail of big glide baits like the River2Sea S-Waver and the PH Lures W Glide and even big soft swimbaits like the Working Class Zero Battle Shad really got me thinking about better presentations.

While I caught some fish on the spy baits, the small swimbaits and the under spins, I was thinking if I had brought my deep jerkbaits like the Megabass 110+1 and weighted them with lead core or suspend dots, I could have gotten the fish to really bite because I was catering to that more aggressive nature than just their curiosity inspires.

But I literally had 20 minutes to load my boat for the trip after being at ICAST all week. I left my jerkbaits, my glide baits box save for two baits, and a lot of things I would have liked to have tried that got more aggressive at that depth.

But watching all that footage really opened my eyes as to how our baits are probably passing by fish and through multiple fish’s strike zones, yet not even garnering the turn of a head or a short follow. The tougher the fishing gets, like it often does in the dog days of summer, I think the more we need to be in tune with getting fish to react by how we work a bait. Sometimes subtle is the key like the Senko up shallow. But even then, I realized quickly that the bites didn’t come on the initial skip. They came after letting it settle and then making it dart hard a time or two and settle again.

I think guys like John Cox and Jacob Wheeler have mastered getting those fish in skinny water to not only see their bait but react to how it moves. While most of us don’t get to see the bass and how they react, I think the more we can make ourselves observe fish behavior, the better we can be as anglers.

A lot of times that observation comes when you get that bite, then analyzing what was different about the bait on that cast. Did it deflect? Did it pause and then take off abruptly? Was it coming over something? Did I reel it a lot faster or a lot slower? Was I up off the bottom or snagging and grabbing? Was there a stutter in the retrieve?

So the next time you’re working that jig on the bottom, think about making it not only come back to the boat, but actually get a fish’s attention and spur an impulse. It doesn’t mean you have to jerk it 10 feet off the bottom. Sometimes just making it kick 3 times a few inches at a time in succession stirs up the bottom and gets a fish’s attention. Sometimes just lifting and dropping a bait makes a fish react more. Sometimes the constant grinding of something just being drug continuously on the bottom is what triggers them.

I certainly don’t have it all figured out, but that’s the point of fishing. I’m always observing and experimenting to better capitalize on how the fish are reacting to my fishing lures and presentations. 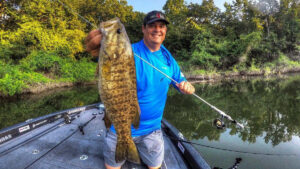