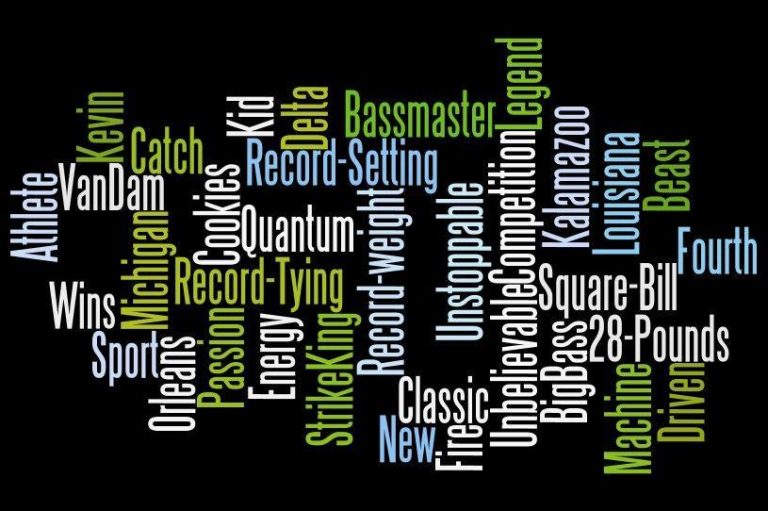 At this point, it’s old news that Kevin VanDam won the 2011 Bassmaster Classic on the Louisiana Delta, his record-tying fourth Classic win. He did it with 69 pounds, 11 ounces — another record. It was his 20th Bassmaster win. Yes that’s a record too. So is the $5 million in earnings he surpassed with the victory. Is it fair to compare him to Superman? Because the bad guys always pull out kryptonite and shut Superman down, albeit usually briefly.

A better question would be: Is Superman good for bass fishing?

It’s not that the sport of tournament fishing needs saving. But do we need someone who gives our sport credibility in the mainstream? That’s the question some folks in the media room at the 2011 Bassmaster Classic in New Orleans found themselves pondering without actually coming out and saying it. There was such a weird emotion in the media room backstage during the weigh-ins on days two and three. The room was filled with competitors in the Classic and outdoor media types covering the event.

The room was busy and noisy with 20 people doing interviews simultaneously in the equivalent of an office break room. Then VanDam comes on the closed-circuit TV, cruising in his Nitro Boat being pulled by his Toyota Tundra. Several of the interviews pause as both parties turn to the television. He pulls 5-pounder after 5-pounder out of his livewell, filling his weigh-in bag. As he walks up on stage, the rest of the interviews stop. “I want to see this,” several anglers said.

“28 pounds!” is announced over the television and stadium loudspeaker. There is a collective sigh from both the media and the anglers. Followed by comments like “Wow”, “Amazing”, “Unreal”. But the “sigh” that followed is what caught me. The anglers were noticeably tired of the notion they were handing another trophy over to their competition. The media was tired it seemed of writing another article about how “amazing” VanDam is and how he won yet another event.

One reader got mad at me for using the word amazing too much in my Classic wrap-up story. That was by design, and it was tongue-in-cheek because I had heard the word so much being used to describe VanDam by other pros and media folks. In fact the word amazing was used to describe the fishery, the last day catches, the big bass, the weather, and of course KVD’s heroics. But I also heard some one use it to describe the food at the media day event too. So amazing might have lost some of its luster, much like the word awesome. Maybe it would help to understand what is and isn’t amazing.

Fried shrimp isn’t amazing. Catching nearly 70 pounds of bass in a fishery that folks were afraid would never come back after multiple weather and man-made disasters rolled through it is amazing. Winning 20 tournaments at the top level of competition in any sport is amazing. Winning $5 million for catching green and brown fish is amazing. But I digress.

Back to the original point, my take on the whole situation with VanDam and the sport of professional bass fishing tournaments is while VanDam may be wearing on the sport internally, he’s good for the sport externally.

He’ll appear on Mike and Mike on ESPN2 and ESPN Radio, SportsCenter, and more this week. People outside of a certain sport take notice of champions when they prove that there is more to it than luck.

I’m no cyclist, but I was pretty interested in what Lance Armstrong did in the Tour De France all those years in a row. I’m not into tennis, but I liked seeing Pete Sampras dominating in his sport. I don’t like golf, but it was pretty neat to see how dominating Tiger Woods was in his prime in the sport.

The point being, I paid attention to those sports because there was a dominant presence in that sport. It’s simply a reassurance that you can work hard, work fast, work smart, make the most of your opportunities and figure things out on the fly to be the best at something. I think it’s human nature to want to believe that and most of us will never have an outlet to display that success individually.

That’s not a slight to the other fishermen out there on tour. There are a bunch of tough, accomplished fishermen. That’s obvious, because while I know VanDam has made a check in 82 percent of the tournaments he’s entered (191/233), I also know that of the 20 tournaments hes won, he’s lost 213 of them. So I remain grounded that he’s not a savior of tournament bass fishing. What pro athlete can say that about their sport either? There are a lot of great professional anglers in our sport just like in other sports. No one athlete wins every game.

But the fact that VanDam has been especially dominant in the last 13 months winning two Classics as well as one of the AOY races and the Kentucky Lake event shows ancillary fans of sports that there is a dominant force in this sport too. It proves that fishing at the top level isn’t luck. Because no one gets lucky that much in that many different situations, in the crowd of his peers dealing with the exact same weather and fish behavior variables.

The scariest part of VanDam’s Classic win from a competitors perspective, is that he seemed “recharged” to me. Last year when he won the Bassmaster Classic on Lay Lake, he had to come from behind to do it. It was a cold event. And it was a grind. He looked physically and mentally exhausted after the win last year. This year, every catch seemed to fire him up more. Every catch seemed to pump him up and make him fish harder. Every day his confidence grew, and I saw glimpses of that cocky kid that burst onto the scene 23 years ago.

His seemingly renewed vigor doesn’t bode well for the guys competing in the sport. But it does bode well for those on the outside, casually looking in on our sport. In my opinion, fishing will never be mainstream. But we still have a long way before outsiders think fishing is more than a bunch of bubbas on a bank staring at a bobber. And for the record I’m occasionally a bubba on the bank staring at a bobber with my son. But I hear the 40 million number thrown around all the time (number of licensed fishermen a few years ago in the US). That is a respectable number. But it also means there are 270 million people who don’t give a rip about fishing in this country alone.

Having a superhero in a sport can do a lot for the sport — for its growth, for its popularity and for its respect. Maybe, just maybe, VanDam actually gets respect for all of the anglers in his sport with his accomplishments and the way he carries himself. Maybe the weight of that sometimes is more than he can bear. Maybe the weight has been lifted, if only for a while.

But for now, any way you slice it, he’s the Superman of our bass-fishing planet.