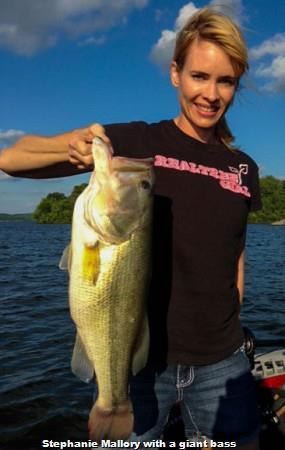 We like to all think we’re God’s gift to bass fishing. Or we at least know someone who thinks that of themselves. The truth is we’re creatures of habit, and no matter how hard I try to improve my craft as a bass fisherman and be creative, I often settle back into my normal routines, lures, techniques and even spots

I recently fished with some avid hunters who fish a good bit but not as much as those of us who consider ourselves to be avid anglers, fishing 2 or 3 times each week or more. I found it very interesting that their approach was very different than my approach and at times more effective. So I spent a bit of time analyzing the couple of afternoons we spent together and came up with 5 observations about how to be a better bass fisherman by looking at it from another perspective.

In a couple of days, on a very pressured lake (major tournament in town) with so much wind that we were limited to one creek, I found the following to be not surprisingly true:

I think anglers of all skill levels could learn from these 5 simple tips. At the very least it should serve as a good reminder to stay focused on our fishing.

Dragging a small worm slowly along the bottom well out produced proven reaction type presentations on schools of fish that had obviously been fished for regularly and what I like to call “tuned up.” I would pull out my power offerings like spinnerbaits, crankbaits and more and get a bite or two, while they would drag worms and drop shots along the bottom slow and steady and get bit regularly. Proof that when the fish get a little more educated, slowing down can be beneficial.

Pay attention to what your lure is doing

Granted I was on a trolling motor, helping three folks untangle lines, unhook fish, rig up worms, retie lines and try to keep us close to the fish in 25-30 mph winds. But  I quickly realized they were back there focused every second on what their bait was doing.

As avid anglers, we’re always guilty of thinking ahead. Keep up with the wind and current on the trolling motor. What waypoint should I hit next? They’re not biting good here; maybe that next spot will be on fire! All those thoughts keep us from the task at hand, which is coaxing weary bass into biting on this spot on this cast.

The fish had been slamming big jigs and 12-inch worms on heavy Eco Pro tungsten weights just days prior to our trips. I continued to throw those lures and got out fished 3 to 1 both afternoons by folks who don’t fish near as often as I do on drop shots with 4- to 6-inch straight-tail worms.  And they caught just as big or bigger bass than the bigger lures. Another sign that sometimes pressured bass need something new, not always something bigger.

No movement is often better than too much movement

I’ve learned in recent years that leaving a bait in the strike zone longer can actually have a better result than ripping a bait through there, especially when you’re talking about bass grouped up in a small area. Smaller subtle movements and more importantly long pauses seemed to produce as well or better than conventional  “chunk and wind” options.

This was really drove home when Stephanie Mallory reeled in a bass weighing more than 6 pounds on a drop shot she had just basically left soaking on one spot for a long while. That fish would have rivaled the big bass for the day in the Everstart Series and she caught it by basically doing nothing with her minuscule drop shot worm.

Be proud on every catch

It seems like when you fish lakes full of good bass, you expect to catch good bass on every cast. You might catch 20 smaller bass in a row and be disappointed and even disgusted. That way of thinking has plagued me at times.

I guess as I get older I’ve learned two things from smaller fish in big schools:

So why not just be happy catching fish after fish and enjoy the fact that you’re outsmarting them. Sure there are probably bigger fish to catch somewhere on the lake. But if we get too focused on what could have been and not what is going on, that’s when we lose our love for fishing in my opinion.

So I appreciated a reminder from a few outdoors friends and hopefully you will too as we all strive to be better bass fisherman and stay out of our normal routines that often lead to ruts.