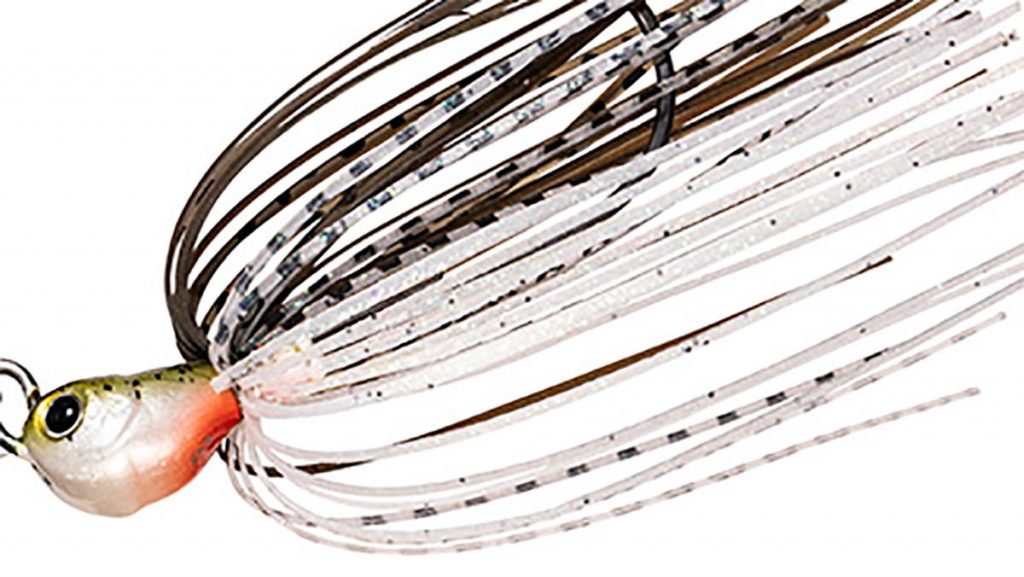 In a wink, it flashes and disappears underwater. Suggestive of a preyfish tail-kick, the luminous blade hums a subtle but palpable harmony; seems to be singing directly to the bass. As the thin-edged razor cuts water with the speed and precision of a Santoku, it vanishes and reappears in rapid succession. Inside the brains of bass, alarms bells toll. Although they can’t see it at first, predators in the neighborhood can feel its pulse-a sweet tune that pings lateral lines and incites mandibles to snap.

A valuable combination of refined energy, unpredictable action and visual stealth, the new Z-Man JackHammer StealthBlade is about to add an exciting new chapter to the book of the bladed jig.

“The StealthBlade is the antidote for bass that have seen endless parades of traditional bladed jigs,” divulges Brett Hite, pro angler and designer of the eminent Z-Man ChatterBait JackHammer and its radical new finesse offspring, the JackHammer StealthBlade. “Throw it in clear water. Skip it under heavily-fished docks and laydowns. Cast it for big smallmouths. Pitch it anywhere you want, and present bass with a totally different sound and cadence than other bladed jigs. We’re super pumped about the way this bait turned out; another fish catching collaboration by Z-Man and leading Japanese lure maker, EverGreen International.”

Back In 2017, no one could have anticipated the lure that would ultimately turn the pursuit of bass on its head, a bait that would go on to produce more giant fish and more tournament dollars than any other in recent memory. The Z-Man ChatterBait JackHammer created a singular subset of pro-grade bladed bass jigs-a lure anglers now bring to almost any lake with the assurance of big fish and mega limits in the livewell. 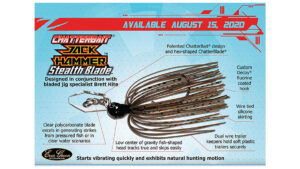 “Two years ago, recognizing the rapid ascension of the JackHammer, we were already working on the next lure in the ChatterBait evolution, what we’d eventually dub the StealthBlade,” notes Hite, who has won over a million dollars on bladed jigs. “The first JackHammer created a phenomenon within the bladed jig arena. The success of that lure, in effect, opened a niche for a refined, finesse version smartly engineered with equally high-end raw materials and components as the original.”

“Few weeks ago, I caught multiple 5-pound smallmouths with the StealthBlade at Lake Mohave, Arizona,” he recalls. “But the ‘Blade’s also been producing big bass in stained water. Actually, I’m really fired up to throw it in Florida lakes where a ton of people use the original JackHammer.”

The driving force behind the patented new ChatterBait design, a clear polycarbonate blade produces a totally different sound and vibration, but like its predecessor, starts thumping intensely with the first half-turn of the reel handle. “I’d say the vibe of the StealthBlade feels a little tighter, hunts with a slightly higher frequency vibration,” asserts Hite.

He notes that the clear blade is physically smaller and thicker than that of the JackHammer. It’s beveled on all edges, tapers down to a razor-thin tip and flaunts that trademarked ChatterBlade ® shape. “The special, covert blade gives the jig’s head a sweet wobbling action,” he says, “which also activates the different trailers you put on the hook.”

“Working with Brett Hite and EverGreen, our main goal has been to give anglers as many bladed jig options as possible,” say Z-Man President Daniel Nussbaum. “Partnering with the sharpest bladed jig fishermen on the planet and a cutting-edge Japanese company like EverGreen has reinforced our ability to put innovative bladed jigs in anglers’ hands. From a product development and manufacturing standpoint, EverGreen brings to the table precise attention to detail and the highest quality possible.”

“What’s really cool about the StealthBlade,” adds Hite, “is the bait’s propensity to hunt and juke randomly, side-to-side, way better than other bladed jigs. You don’t need to jerk the rodtip to activate it. Just quickly speed up the retrieve to make the bait initiate its natural hunting action. That unusual move triggers a ton of extra bites.”

“The fluorine nanocoating let us build the bait with a thinner wire-gauge hook that’s just as strong as the heavier hook on the original JackHammer. The gap on the StealthBlade hook is the same, but the shank is about a quarter-inch shorter for a slightly more compact presentation. The wide gap means I can still use my same favorite jig trailers, but in a subtler, ‘finessy’ package. The bait won’t overpower the trailer or vice versa.”