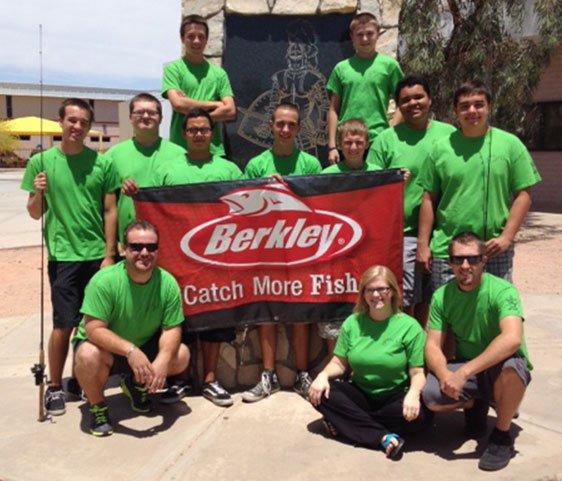 Lake Havasu City (Arizona) High School Anglers had the smallest and one of the newest fishing clubs in the competition but that did not stop them from bringing home the grand prize of over $4000 in product from the first annual Berkley High School Fishing Club Challenge. Coach Meghan Cates successfully led the team through the monthly â€œextra creditâ€ challenges but it all came down to the final report card and a combined score of 503 points to win the trophy.

â€œThe Berkley Challenge improved our fishing team by giving us a direction,â€ said Coach Cates. â€œLHHS Anglers Club just started at the beginning of the school year with only seven members and most of them had never fished. The coaches were trying to find ways to educate the members on all aspects of the sport of fishing, and the Berkley Challenge allowed us to do so. We have kids that went from never fishing to now fishing tournaments. Thank you Berkley for giving us this opportunity and congratulations to my members! I could not be more proud of them and what they have accomplished in a year.:

â€œThe Lake Havasu team more than doubled its membership and integrated itself into the community through fishing,â€ stated Roxanne Coleman, Senior Field Marketing Manager at Berkley. â€œThey epitomize the goals of the Berkley Challenge which focuses on bringing new anglers to the sport and providing training to become skilled in a lifetime hobby. From the start the Berkley team decided to run this competition like a high school class. The coach (teacher) gave the students the syllabus with individual and team assignments in September and each month the Berkley team would issue challenges for extra credit. The teams were asked to do all sorts of fun things like create a my favorite Berkley baitvideo, research professional anglers, hold training classes with local fisherman, sign up to help a local natural resources agency and so much more.â€â€

Second place and more than $1500 in prizes was awarded to the Oak Lawn Community High School (Illinois) Spartans with a team of 23, coached by Chris Kuchyt. Once the Spartan signed on they were in it to win it.

â€œThe Berkley Challenge offered a unique twist to our fishing season,â€says Coach Kuchyt. â€œAs a result of the Challenge, we discussed new topics and took part in activities we would not have otherwise tackled. Topics from RecycledFish.Org, an online environmental stewardship magazine, offered great discussion points at our team meetings. This Challenge offered students the opportunity to not only become better anglers, but it also offered learning opportunities that they will carry on in their lives.â€â€

Crossett High School (Arkansas) with a team of 30 earned third place, coached by Scott Pennington. This was another dark horse club that started in September 2013.

â€œI really didn’t think we had a chance against some of the other schools,â€ said Coach Pennington. â€œOur hope was to just get a team started, fish a few times and learn a few fishing techniques. With the Berkley competition being announced, it gave us a drive to succeed.â€

Honorable mention was presented to Okaw Valley High School (Illinois) with a team of 15 members coached by Michael McGill. â€œ

â€œWe were really excited about the Berkley challenge from the start,â€ McGill said. â€œOur strategy was to tackle the challenges, complete as many as possible and bring the trophy to Okaw Valley. The challenge to teach youth about fishing inspired us to contact our elementary school and give a presentation to the 4th graders about fishing. It was a lot of fun for the kids and for us as well.â€