After the day two weigh-in Saturday, Nov. 3, 2018, at the 14th Annual Black Bass World Championship on Lake Cuchillo near China, Mexico, Team USA was awarded the Gold Medal in the competition with a total weight of 61,400 grams (135.36 pounds) for two days and a total of 49.5 penalties.

There were 15 countries represented in the world bass fishing championship. Each country could have 3 teams of two anglers fish. Each team is assigned a group and penalties are assigned based on performance. If you finish first for the day you get 1 penalty point. If you finish 10th you get 10 penalty points.

On day two, the team of Terry Bolton and David Dudley led the charge with a 5 bass limit that weighed 11,525 grams (25.41 pounds). Bolton was subbed in by team captain Scott Martin for David Fritts on day two after Fritts had boat issues on day one. Scott Martin and Scott Canterbury followed up their amazing day one catch of 34 pounds with another limit weighing 10,716 grams (23.63 pounds). James Watson and Fred Roumbanis fell off their 30-pound-bag pace from day one with a day-two catch of 3 bass that weighed 4.6 pounds. 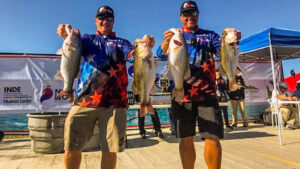 Team USA won the gold medal with a strategy that included a combination of flipping trees in 8 to 12 feet of water and fishing out deep with crankbaits and worms offshore. In this format you want to make sure all your teams finish high in the standings so strategy has to be planned around all teams catching fish.

Fritts caught his fish the first day on Berkley Dredger 14.5, 20.5 and 25.5 crankbaits. Bolton hopped a Redbug Zoom Ol Monster and cranked Rasta-colored Rapala DT14 and DT16 while Dudley threw a Berkley Dredger 25.5 to catch the big bag on day two.

Fred Roumbanis cranked a couple different deep crankbaits including an IMA Beast Hunter while Watson cranked and caught them today on a Luck-e-Strike Ring Worm and a Jewel football jig.

See the day one story here. 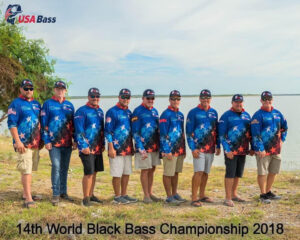