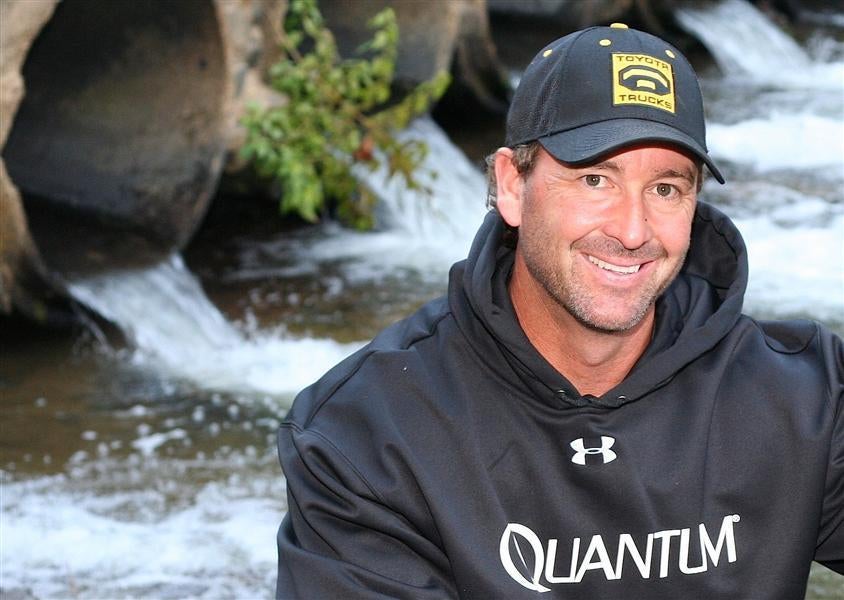 Gerald Swindle is bass fishing’s funniest man. And finally, finally, after 167 B.A.S.S. tournament tries without a win, the 2004 Toyota Tundra Bassmaster Angler of the Year can smile victoriously after leading wire-to-wire to win the Bass Pro Shops Bassmaster Southern Open.

He reflected on his first B.A.S.S. win as he piloted his Toyota Tundra away from Florida’s Lake Toho.

â€œBig Showâ€ = Big Heart.   Top Florida bass pro, and Swindle’s Toyota teammate Terry â€œBig Showâ€ Scroggins told Swindle to get out there in the middle, and sling a Carolina Rig around if he was struggling on the bank.   â€œBig Show won’t lead you astray, he’s got a big heart,â€ said Swindle.   â€œIt seems I’ve always struggled in Florida when I fish against the bank. â€˜Big Show’ saying that gave me the vote of confidence to get out there and search for some big ones that were grouped-up, staging to move up and spawn, but hadn’t yet made it to the bank.â€

Two bites and only two Bites. â€œI about froze to death out there on the first day of practice.   I was cold.   I was wet, and I only got two bites that day.   I don’t mean three.   I’m telling you, I had two bites using a Carolina Rig, but my gut, my intuition, told me they were the right bites.   I caught a few small fish in different areas during the other two days of practice, but my confidence was in those two bites. And those are the fish I won on in the tournament.â€

No worries, Honey.   â€œI called â€˜Lulu’ (his wife LeAnn) that night, after Day 1 of practice, and told her I’d had two bites all day.   She was worried.   But I’m telling you, I felt so good about those two bites being good fish that I told her not to worry, that I actually felt pretty confident based on just those two bites.â€

Cold fish.   â€œThose bass were cold. They weren’t in a mood to chase.   I could not have moved my lipless baits much slower than I did.   I was barely draggin’ them through the grass in 6-feet of water, and that’s how they wanted it, slow, slow, slow.â€

Back Deck Pressure.   Swindles’s co-angler on the final day, Marlon Crowder, caught three keepers totaling an astonishing 21 pounds by 8:00 a.m.. â€œHe was a great guy, I was rooting for him to do well, but let’s be honest, that’s a gut check.   I told myself if I could overcome seeing him catch three giants so early in the day from my back deck, then I’d be tough enough mentally to win.â€

Smokin.   â€œI threw the lipless baits and the Carolina rig on 7-foot Quantum rods, and both rods were outfitted with our new lightweight Smoke reels.â€

Safety First.   â€œI’ve got this big ole trophy strapped into this Tundra with the seatbelt around it.   Safety first.   You gotta take good care of the things that are important to you.â€