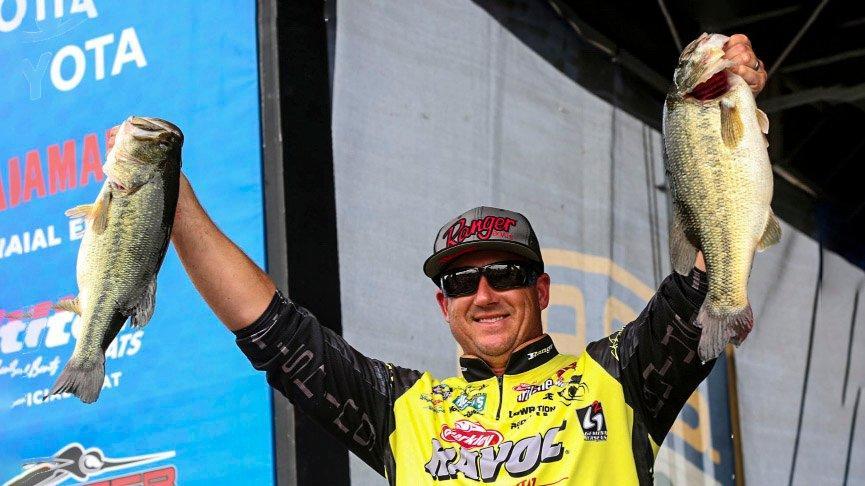 When Skeet Reese arrived in Alabama last week for the Diet Mtn Dew Bassmaster Elite at Lake Guntersville, he had a solid plan in place for how he wanted to fish.

So instead, he just followed the lead of his friend and roommate on the tour, Byron Velvick.

Velvick told Reese about the 7-inch Basstrix Swimbait — the largest version of a 15-year-old soft plastic bait that has seen a recent resurgence in popularity — and Reese used it to win with a four-day catch of 92 pounds, 11 ounces. He entered the final round in second place, more than 2 pounds behind Michael Iaconelli, but vaulted himself to the $100,000 victory with a Sunday catch of 25-5.

His buddy, Velvick, placed second with 88-1.

“You just couldn’t have scripted this any better,” said Reese, a California native who now has eight victories in B.A.S.S. events. “I had a really tough practice. I was going out with the anticipation of catching 13 to 14 pounds a day — unless maybe I could find a big bite and come in with 16 to 17. But Byron turned me on to a bait, and it evolved into something special, a win.”

Reese spent most of his week fishing in or near Seibold Creek, targeting a variety of shallow and midrange structure along the banks and on offshore flats. He believes he caught fish from all phases of the spawning process — prespawn, spawn and postspawn.

The rod-and-reel combination Reese used to throw the swimbait came from the seemingly endless line of products that bear his signature. He used a 7-foot, 5-inch Skeet Reese Victory Pro Carbon rod and a namesake Pro Carbon reel with a 6.4:1 gear ratio, both from Wright McGill.

He said the slow-retrieve reel was particularly important because the bait had to be fished painfully slow.

“There was so much fishing pressure on the lake that you had to get the bait down to them and slow roll it to get the bite,” Reese said. “That’s one of the things I figured out the first day. Around the shallow laydowns, they were a little more aggressive. But once the bait got out a little deeper, you had to really slow it down.”

Velvick, who spent a lot of time fishing the Basstrix Swimbait around Guntersville’s many bridges, wasn’t quite as consistent as Reese all four days of the tournament.

While Reese brought in 24 pounds or better three of the four days, Velvick managed only 18-plus pounds on Day 1 and Day 3. But his Sunday catch of 24-7 was enough to lift him from eighth place into second with 88-1.

“You’ve got to help your friends out,” said Velvick, who lives in Texas. “You’ve got to be honest with the guys you fish with. I actually went and found him some more baits this morning.

“I felt like a NASCAR guy with extra tires in my trailer, and my driving partner needed tires to win the race. Even though I was in the race, too, if I couldn’t win it, there was no one else I’d rather see win.”

Besides the assist from Velvick, Reese benefited from New Jersey pro Michael Iaconelli finally running out of fish.

The leader for the first three days of the event, Iaconelli insisted things had gotten tougher for him each day. But good decisions had helped him maintain the lead, and he was hoping for one more solid limit from the area he was fishing in Seibold that had been so good to him.

His primary area fizzled, along with his backup plan, and he managed only one fish that weighed 2 pounds, 15 ounces. He finished 12th with 72-7.

Alabama angler Derek Remitz finished third with 85-5, and might have placed higher if not for losing a 5-pounder Sunday. Tennessee pro David Walker was fourth with 84-8, and Texan Keith Combs was fifth with 83-6.

Rookie Carl Jocumsen placed sixth with 81-15 and became the first angler from Australia to qualify for an Elite Series Top 12.