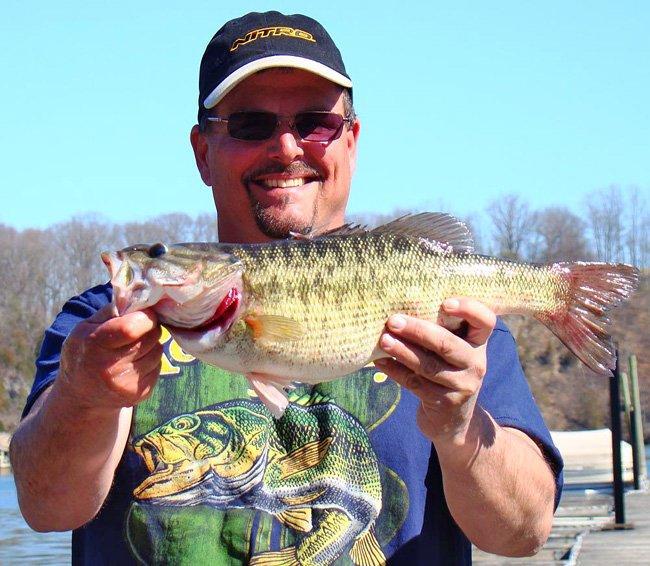 The Virginia Department of Game and Inland Fisheries (VDGIF) State Record Fish Committee has certified a new state record, a spotted bass weighing in at 4 pounds, 7 ounces and measuring 20 inches long. The new record was caught Saturday, March 10, 2012, on Claytor Lake by Mr. Rod Kegley of Dublin, Va. Kegley’s prize catch easily exceeded the past state record of 3 pounds, 10 ounces, which also came out of Claytor Lake and was caught by Mike Ritter in 1993.

Kegley, an avid angler, wasn’t aware of his record breaking accomplishment until he returned to Rock House Marina. After watching a local tournament weigh-in, Kegley was alerted by another angler that his catch, which looked very much like a largemouth bass, was actually a huge spotted bass. Marina owner Mike Burchett weighed the fish and then held it in the marina’s bait tank. VDGIF Aquatic Biologist, John Copeland, and VDGIF Conservation Police Officer David Peake verified Kegley’s catch that afternoon.

Kegley, who was casting in deep water along a flat in the ‘Peaks Creek’ arm of the lake, caught his record spotted bass using a castable umbrella rig called the Yumbrella by Yum Bait Company. The castable multi-lure rig is a wire harness similar to a saltwater umbrella rig that is popular among anglers targeting big striped bass and other game fish along Virginia’s coast.

Kegley said he regularly likes to “bring a mess of fish home,” to cook, but decided his prized catch was too special to hit the frying pan. The record spotted bass was released unharmed back into Claytor Lake for others to enjoy. Kegley stated that spotted bass fishing on Claytor Lake has improved in recent years. The fish are getting larger and Kegley expects it will not take another 19 years to see the record broken again.

Kudos to Virginia for certifying a record catch and allowing the angler to release it unharmed back into the water. For more information about Claytor Lake and Virginia’s Angler Recognition Program and other state fish records visit: HuntFishVA.com.