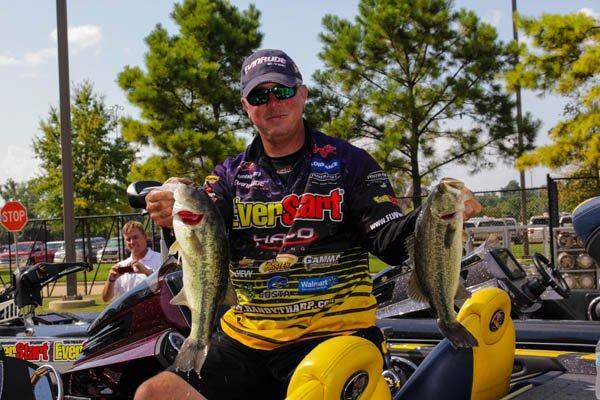 When the smoke cleared on stage Sunday in the Shreveport Century Link Center, Randall Tharp stood on stage as your 2013 Forrest Wood Cup Champion. He weighed 5 bass for 14 pounds to seal the deal with a four-day weight of 53 pounds, 2 ounces.

Tharp exudes confidence when it comes to tough tournaments where heavy cover is a factor. Heâ€™s a flipper and frogger and has a knack for keeping his cool when there are heavy bass in heavy cover and not all of them make it to the boat. But this week, he was able to get enough of those big bass that count in his livewell and to the stage and take home the $500,000 top prize.

Tharpâ€™s keys to victory this week were timing his spots right and then hunkering down in his key areas with a Bronzeye Spro 65 frog and 55 frog and a 4×4 Swim jig with a Strike King Rage Craw in extremely thick pads, hyacinths and hydrilla. He caught some fish on a Lucky Craft 1.5 crankbait this week.

The main lure for this tournament for me was the 4×4 Swim Jig. Where others were throwing a frog, he was throwing the swim jig and getting bigger bites. But today the Spro Bronzeye Frog was my best bait.

â€œWhen I saw this place on the schedule when it came out last year, itâ€™s all I could think about. Itâ€™s the way I love to fish, and I knew I would be able to get my flipping sticks out and do what I do best.

â€œI practiced right before the cutoff. I only practiced one day in the area I really caught my weight in this tournament. I spent some time in a lot of other places but the one day in practice keyed me into the fish in this area.â€

â€œI spent the whole week fishing in the very back of some of the key backwater areas and keying on those bass that were feeding on bluegill. Last year in the Cup I won targeting bass eating bluegill and I was focusing on that again this year. I threw a frog, a Trigger X Flutter Worm and several other baits. I had to try to hit every pad in my area. I would work slowly through Do Not Dredge and then work my way back.â€

â€œI could feel my chances going away today. Anytime you bank your chances on one big bite on one area, youâ€™re in trouble. I found a really good chatterbait bite on Friday. I caught a bunch really quick on the main river doing that and I was really excited. I thought if I could catch 4 for 10 pounds doing that and then a big fish on my primary area then I would be in good shape.

â€œToday I locked down to pool 4 and caught a bunch of fish and caught a limit really quick. Every fish I caught today seemed to weigh 1 pound, 4 ounces. If I could do it any different I would have gone down to pool 3. I had a spot down there on my mind all week and I couldnâ€™t bring myself to do it.

â€œIâ€™m actually glad that Randall caught that good bag today because it makes it a little easier for me to swallow this loss. All I caught on my best area that has produced my big fish everyday was one small fish on a buzzbait.â€

â€œI was fishing in Whitehouse today. Iâ€™ve got a bruise on my rib from setting the hook and pulling them out of the pads with a frog and braided line in that backwater area this week. I caught my limit the first day flipping on the main river. The second day I caught a big one in the backwater areas that helped me. So I switched and yesterday I got on the frog bite and stuck with that today.â€

â€œEveryone knows Iâ€™m pretty disappointed. It was a great week. Anytime you get to fish all four days itâ€™s a great week. I fished all day to catch that big one. My best area in Whitehouse died after the second day, the wind killed it. I could have gone out to the main river and struggle around.

â€œAt 11 am I didnâ€™t have a fish and I said, â€˜Iâ€™m going to come in with a big fat zero if I donâ€™t go out to the river.â€™ So I ran out there and caught 5 real quick and then went right back to my primary area and was able to cull up with one big one.â€

Nixon fished in Whitehouse and caught a lot of fish on Yamamoto plastics including a big Blue Pearl (white) Yamamoto Creature bait and Yamamoto worms.

â€œThe first two days I was throwing the new frog from Lunker Hunt fishing in the Jungle the first two days. Then on day three I caught three weigh fish on the main river and today I ran down and locked through to pool 3 and fished the tailrace blind. I hadnâ€™t been there in three weeks, but I figured my backwater fish had run out. So I had to try something different.â€

Neal was one of the few competitors in the top 10 fishing in pools 3 and 4.

â€œIâ€™ve been blessed to be here to fish on the last day. I had one fish hang me in a stump and I had to go in to my waist and take a deep breath and wrestle it out. You never know if itâ€™s a 6-pounder or a 2-pounder. I came up with it and it was a 2-pounder. Iâ€™ve had a great week this week catching them cranking a Series 3 Strike King crankbait, throwing a KVD Frog, a Strike King Perfect Plastics finesse worm.â€

Rose fished the main river the first 3 days but made some changes on day 4 to fish some more backwater areas. He was waiting for current to pick up on the weekend and position the schools of fish he knew was in a few key places. But when he started catching them they were mostly small fish. He was confident if the current got real strong and the river cleaned up a little he would break a big bag on the main river current faces. But it turns out the backwater areas ended up being the key this week.

â€œI caught 25 keepers on the main river today, but one 2-pounder. I had a blast out there today. I had a spot where I caught a bunch of bass. I had a few spots where I could catch 5, let it rest, come back and catch 5 more.â€

Morrow hit a lot of main river spots at the end of wing dams and openings to backwater canals and bays. He was looking for those irregularities along the main river that had current hitting it or coming out of it.

â€œI got to go fishing on the last day. Today I caught a lot of fish on a worm. I broke off three fish. I guess they were just fraying my line on the trees today. I have been fishing the main river this week but today I had to change up and go to some backwater areas and drag a worm through the timber. I caught a lot of bass but just no big ones today. Iâ€™m just happy I got the chance to fish today.â€

Monsoor caught most of his bass this week flipping the main river bank grass with Yamamoto Creature baits.

Dodson mixed it up between the main river and 3 key backwater areas near the takeoff in pool 5 this week. He cranked shallow wood and rock on the river, he threw a frog and flipped in the backwater areas around pads and other vegetation. 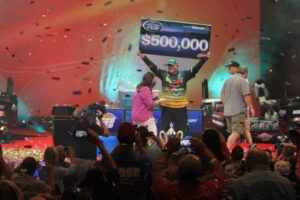