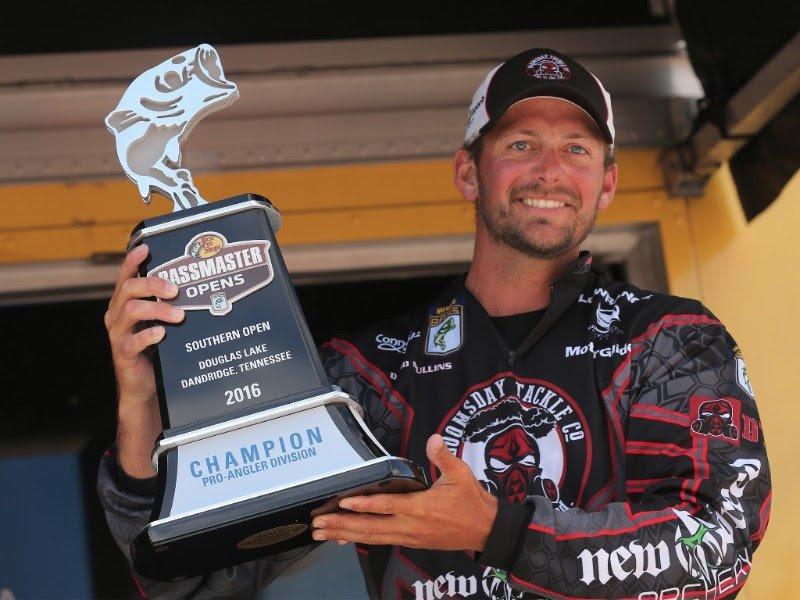 After consecutive runner-up finishes at Douglas Lake, David Mullins now knows what it feels like to be a champion. Mullins stayed in first place all three days to win the Bass Pro Shops Bassmaster Southern Open.

Mullins had a five-bass limit weighing 19 pounds, 5 ounces, Saturday to give him a three-day total of 62-12. Scott Canterbury of Springville, Ala., was second with 56-10, and Britt Myers of Lake Wylie, S.C., finished third with 52-2.

Mullins, who competes on the Bassmaster Elite Series, lives in Mount Carmel, Tenn., and has extensive knowledge of Douglas Lake. He finished second in Bassmaster Open tournaments here in 2013 and 2014 before taking the title Saturday.

“It’s a little bit of sweet redemption,” Mullins said. “I didn’t lose the last two. Somebody just caught ’em better than me. It feels good to come out on top.”

Mullins took the lead Thursday with 21-5, and built his margin to more than 7 pounds by weighing in 22-2 on Friday. Canterbury was the only angler in the Top 12 who managed a 20-pound bag Saturday. His five-bass limit weighed 21-7, but that still left Mullins with a 6-pound margin of victory.

“Every time I have a good finish here, I never catch ’em off the same place two days in a row,” Mullins said. “I think that’s the biggest key to fishing Douglas Lake — having enough places where you know they live, so you can keep moving and have a good rotation. The places I fished today, I haven’t fished all week. I just ran history.”

In recent years, there have been two constant factors in a winning formula at Douglas: concentrating on deep schools of bass and catching more than 20 pounds per day. Mullins followed that pattern. His shallowest bass came in 8- to 12-foot depths and his deepest came from almost 30 feet.

Mullins’ primary lures were Strike King 10XD and 6XD crankbaits in Tennessee shad and green gizzard shad colors. He also caught a key bass Saturday on a Scottsboro Tackle Company 6-inch swimbait in a shad pattern that was specially made for Mullins at Douglas.

“I picked it up this morning and caught one on my first cast,” he said. “I didn’t have a fish until about 9:15. And that one was one of my best of the day.”

Mullins didn’t fish the other two Southern Opens, so he will not receive an automatic qualifying spot in the 2017 GEICO Bassmaster Classic.

“We’ve been going so hard on the Elite Series, I’m tired as it is,” he said. “Scheduling and the extra money it was going to cost to fish those other two Opens is why I didn’t do it. But I’m not even thinking about that now. I don’t regret it one bit.”

For the victory, Mullins won a package valued at $45,000, which includes a Skeeter ZX200 boat and, Yamaha VF200LA outboard motor, Minn Kota Fortrex trolling motor and a pair of Lowrance HDS 7 graphing units.

Justice is a 22-year-old recent graduate of Greenville Technical College. He lives on Lake Hartwell. Justice wants to fish professionally, and he said Saturday’s victory will enable him to do that next year. The co-angler prize, valued at $30,000, includes a Triton 179 TrX boat powered by a Mercury 115 ELPT outboard motor, outfitted with Triton standard equipment.

Elite Series angler Brandon Card, who finished seventh on the pro side, was Justice’s partner Saturday.

“Brandon was completely selfless,” Justice said. “He’s as nice as they come. When he found out I was in contention, he was like, ‘Throw right here at this waypoint. Throw right there where I just cast.’ As a co-angler, you don’t hear that a lot. He’s the reason I won, I think.”

Justice used a variety of baits over the course of the three days, but he said a Strike King 8XD crankbait in green gizzard shad produced most of his weight.

“I’d burn it as fast as I could,” Justice said. “I was using a reel with an 8.3:1 gear ratio. I think that made the difference in being able to reel it faster than anybody through a school and get a reaction bite.