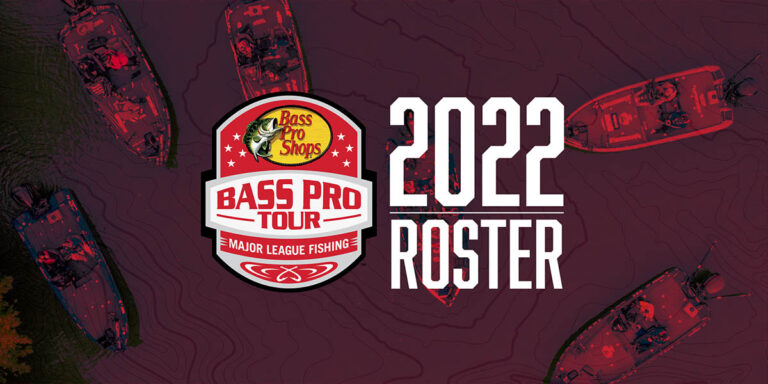 Major League Fishing (MLF) announced today the full field for the 2022 Bass Pro Tour, the fourth season of professional bass fishing’s most visible and competitive tournament circuit. The field of 80 of the world’s top bass-fishing professionals will visit seven fisheries during the Bass Pro Tour regular season and will compete for a total season purse of more than $7.6 million dollars.

The 2022 Bass Pro Tour will kick off Feb. 5-10, 2022, with Stage One at Caney Creek Reservoir, Lake D’Arbonne and Bussey Brake in Monroe-West Monroe, Louisiana.

“The professional anglers that compete on the Bass Pro Tour are the best in the world, and we look forward to seeing what they can do across nine of the finest fisheries in the United States,” said Don Rucks, Executive Vice President and General Manager for MLF. “We expect the upcoming 2022 season to be one of the most challenging, if not the most challenging and competitive seasons in the history of the MLF Bass Pro Tour. We couldn’t be more excited to kick off another fantastic Bass Pro Tour season in February in Monroe and West Monroe, Louisiana, on three fisheries that have never before hosted a professional tournament.”

In addition to millions of dollars in cash prizes, the 2022 Bass Pro Tour anglers are vying for valuable points in hopes of qualifying for the 2023 General Tire Heavy Hitters All-Star event and REDCREST 2023, the world championship of professional bass fishing. Each stage of the Bass Pro Tour includes six days of competition using the catch, weigh, immediate-release format, and is broadcast live on the Major League Fishing app, MyOutdoorTV (MOTV), and MajorLeagueFishing.com, totaling more than 450 hours of original programming. Fans can also follow the on-the-water action as it unfolds on the live SCORETRACKER® leaderboard.

The 2022 MLF Bass Pro Tour will air on the Discovery Channel beginning in July 2022 and the Outdoor Channel in early 2023.

The 80 professional anglers that will compete on the 2022 Bass Pro Tour are: