Chris Lane won the Bassmaster Classic on the Red River

Chris Lane of Guntersville, Ala. won his first Bassmaster Classic in just his second appearance, thanks to a three-day weight of 51 pounds, 6 ounces. Lane bested Greg Vinson by 3 pounds, 7 ounces. Lane incorporated a strategy he put together on the off day between practice and the start of the tournament and seemed maybe the most confident that he was on the right strategy to win this event, given the conditions that put the fish in somewhat of a foul mood.

The big divide among the pro competitors this week was whether to stay and fish in one area, or to move and fish new water each day knowing that fish would be picked off as the tournament progressed. Lane was in the minority fishing multiple new areas each day and sometimes going with the unpopular strategy is what it takes to win.

Lane’s strategy revolved primarily around focusing on hitting a few places each day and going for just big bites and then moving to another fresh area for more big bites. Obviously you can’t predict where the big bites are going to come but he felt like fishing pressure was going to be a critical component this week, and if he could avoid the fishing pressure as much as possible, he could ultimately win by just having the mindset to go and get one or two bites in an area and then moving on to fresh water.

We talked with Lane on Thursday at media day. He was the first angler we interviewed. He was the first one we thought was going to be a player in this event. He was first in the tournament because of what he told us in that meeting. Here is what he said:

“The guy that will be champion here will be the one who figures out when to stay and when to go. Not the guy who sits in one area and fishes just to cull ounces. Culling ounces here won’t win you the Classic. You need that 4-pound bite. You can’t kick just field goals to win the Super Bowl. You’ve got to get touchdowns. You can’t just fish for a limit.   You’ve got to fish for that one good bite and then go fish for another good bite.”

Today on stage was the culmination of that winning strategy.

“There is only one thing I’m going to go to do when I get that trophy and you’ll see it when I get it in my hands,” Lane said. He set the trophy down, kneeled in front and prayed and pointed to heaven. “The man upstairs, if you’ll listen to him, good things will happen. There is nothing more important than my wife and kids, and it’s been a dream to put them in that boat.

“Me and Bobby have been dreaming about this ever since we started watching these shows after the Dukes of Hazard and finishing our homework. It’s something we’ve been working towards since childhood and now it’s real.”

Here’s what the rest of the field had to say.

“I’ve been locking down on a long run down to Pool 4. I was making a big run but it really paid off for me with that little area I was fishing. Today I caught those fish and saddle up to run and had a tear coming down my cheek behind my mask as I was running because it hit me finally what this all means. So I’m just excited. “

“I fished all week with a Yum Vibra King Tube and a Yum Dinger 6-inch watermelon with purple gold flake. If you’re fishing on the Red River and you’re not using a Yum Dinger, you’re missing a lot of bites.

“All you can hope for is to be in contention for the win on the final day. I came close. But I’ve had a blessed week. BASS’s moto is every catch is big. And that’s true. I’m just so excited to have this opportunity. Everyone thinks I’m some great fisherman but the Lord provides for me. That’s all. It’s all my Lord and Savior.” 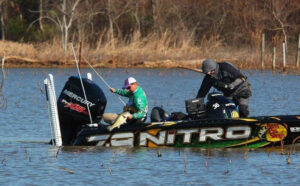 “I was fishing two primary areas. One was in McDade and the other area was a smaller one I don’t know the name of. The McDade fish were prespawn the first day, and I was catching them on a No. 5 Shad Rap when it was windy. It was custom painted in a rootbeer color. The second day when it cleared and got calm, I was fishing a Rapala X-Rap in a Tennessee Shad color. I was fishing it around on the edges of the coontail and little   breaks off those coontail flats. The other fish came flipping a 1/4-ounce Reins tungsten weight and a Berkley Havoc Pit Boss and a 5/0 VMC flipping hook.

“The weights are pretty close to what I expected them to be. I never got a big bite yesterday. That surprised me a little bit. I never caught a fish over 3 pounds yesterday. I worked mats in 8 inches to 2 feet of water. I caught two 3 pounders and 5 pounder the first day in the McDade area, and then I had a 6 and a few 3-pounders today in there. I don’t know there was many more big fish in there.

We’ll have a lot more from the competitors as well as more about Lane’s pattern and baits and more later tonight and tomorrow.