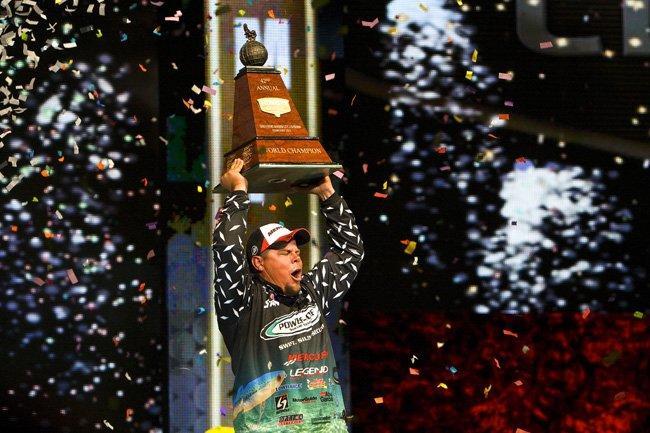 Chris Lane was invited to ESPN headquarters in Bristol, Conn., to appear Friday in a round of interviews â€” â€œthe car wash,â€ as it’s known at ESPN. He will be interviewed on Mike & Mike in the Morning on ESPN2 at 9:45 a.m., participate in a live chat on ESPN.com at 3 p.m., do an ESPN the Magazine interview and appear on ESPN’s SportsCenter at 3:40 p.m. (All times are Eastern.)

Lane’s appearances kick off a weekend of television devoted to the Classic. How the pro from Guntersville, Ala., discovered his winning bass, and exactly how he caught them, will be revealed Saturday and Sunday on ESPN2 in three new episodes of The Bassmasters, a total of five hours of programming originating from the Feb. 24-26 Classic competition on the Red River out of Shreveport-Bossier City, La.
The first of the three Classic shows will air from 10 a.m. to 11 a.m., Saturday, March 3. The hour-long show will cover Day 1 of the competition out of Shreveport-Bossier City, La. That was when Louisiana native Keith Poche of Pike Road, Ala., led the field of 49 of the world’s best anglers. Alabamian Greg Vinson was only 1 ounce behind Poche. Eventual winner Lane ended Day 1 tied at sixth place with his brother, Bobby Lane of Lakeland, Fla.
How fared the Red River favorites? The Day 1 programming will include how defending champ Kevin VanDam and Michael Iaconelli, among other pros, tried their best for the win.
The complete Classic story will unfold Sunday, March 4, on ESPN2. First, from 6 a.m. to 7 a.m., the Day 1 show will air again. It will lead directly into the 7 a.m. to 9 a.m. episode centered on the second day of competition. That’s when Chris Lane snapped up the lead from Poche.
The finale, which will cover Day 3, will begin the same evening at 9:30 p.m., also on ESPN2. The two-hour segment will explore in depth how Lane closed on his first Bassmaster Classic victory and second tournament win of the 2012 Bassmaster season. His taking of the Classic trophy ranks as one of the most emotional moments in bass fishing history.
All air times are Eastern. Viewers should check local listings for ESPN2 channel numbers.
PreviousNext
Contact Us