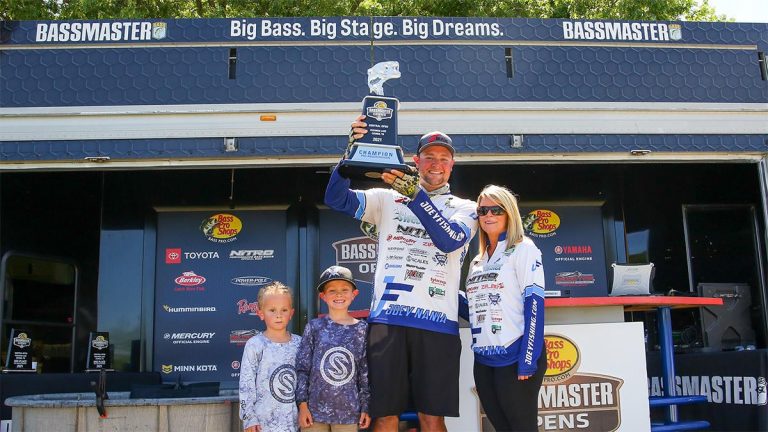 An astute observation led Joey Nania to a strategic bait change that delivered a five-bass limit of 18 pounds, 10 ounces and sealed his first B.A.S.S. win at the Basspro.com Bassmaster Central Open on Pickwick Lake.

After placing third on Day 1 with 21-11, the pro from Cropwell, Ala., added 17-13 and held his position. With his Championship Saturday weight, Nania tallied 58-2 and edged Day 2 leader Lonnie Cochran by a pound.

Nania won $53,750 and a berth in the 2022 Academy Sports + Outdoors Bassmaster Classic presented by Huk on Lake Hartwell.

All week, Nania had been fishing main-river bars between Koger Island and Seven Mile Island, where he focused on a mix of grass and stumps. The latter became an increasingly important element of his game plan and Saturday, he used a forage-appropriate bait to target the hard cover.

“Today, I switched it up and I was throwing a Z-Man Mag FattyZ worm on a 3/16-ounce shaky head,” Nania said. “I found them in the carport of the place where we’re staying. I had thrown them out of the boat, but I rigged one up last night and caught all five fish on that.

“I saw a lamprey stuck on some of the fish I was catching and they would get thrown off when the fish jumped. I figure this thing looks like a lamprey; I’m going to throw it.”

Nania said the key to his presentations was making precise casts that hit the tops of stumps and triggered reaction bites. The only variation was his biggest Day 3 fish – a 6-pounder that bit when Nania threw beyond a stump and pulled his bait past the structure.

“I was just honored that that fish decided to eat my bait,” Nania chuckled. “It was a freak. It was just so big and so long broad; it was just a beautiful fish.”

Prior to switching to the shaky head presentation, he also caught fish pulling a Carolina rig past the stumps.

Nania’s 6-pounder bit right after he lost an estimated 5. Had he caught that first fish, he likely would have drifted past the stump where the bigger one was sitting.

“I’m a believer in Jesus and when it’s your time, it’s your time,” Nania said. “If I hadn’t caught that 6-pounder, I could have been within ounces of not winning.”

Cochran did most of his work north of Koger Island on a 50-yard stretch of main-river shell bottom in 6 feet of water with scattered milfoil. On Friday, an early boat number allowed him to reach his spot quickly and sack up his big limit by about 7:30 a.m.

Today’s postfrontal conditions brought bright skies and still wind. This took a toll on Cochran’s fish and he struggled with a slower bite.

“I caught most of my fish on a 3/4-ounce Scottsboro Hellcat football jig with a creature bait trailer,” Cochran said. “When it got tough during the day, I’d catch a few on a spinnerbait in the scattered grass.”

While a morning shad spawn played a role the first two days, Garrett caught most of his better bass on a 16-foot ledge in front of spawning areas. Devoting his final day to this area, he caught all of his fish on a powder blue back chartreuse Strike King 6XD.

“I had a fun week; I honestly didn’t want to grab those fish today – I caught so many fish my hands were hurting,” Garrett chuckled. “I love (cranking); I just never got a good bite today.”

Nania leads the Central Open points standings with 200 points. Cochran is in second with 199, followed by Garrett with 198, Andy Hribar of Lakeville, Minn., with 197 and Joseph Webster of Winfield, Ala., with 196.