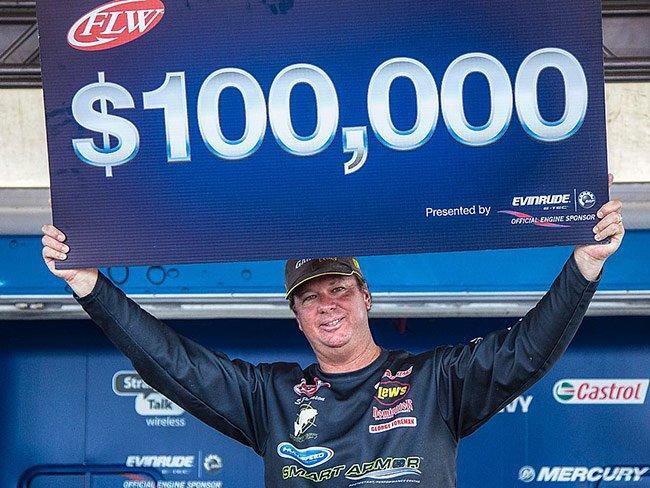 Rookie pro Skip Johnson of Goodells, Mich., brought the fourth-largest stringer of the entire tournament to the scale Sunday â€“ a five-bass limit weighing 24 pounds even â€“ to win the Walmart FLW Tour at Kentucky Lake presented by Evinrude. Johnson’s four-day total of 20 bass weighing 88 pounds, 10 ounces gave him the win by a narrow 1-pound, 2-ounce margin over second-place pro Jason Lambert of Pickwick Dam, Tenn., and earned him the $100,000 prize in an exciting finale to the four-day event that wrapped up the 2014 Walmart FLW Tour regular season.

â€œI’m almost speechless,â€ said Johnson, who earned the win in his first career top-10 showing on the FLW Tour. â€œI knew that I was on something special and that I had a spot that I could win the tournament on. I found the spot a few years ago in another tournament and I went to it a 9 a.m. on the first day of practice. It was a creek channel, way inside where everyone else was fishing.â€

Johnson said that his creek channel was located up the Tennessee River, near New Johnsonville. After realizing that he was on to something special he spent almost his entire practice nearby, making sure that no other tournament competitors found his secret.

â€œI’ve been watching guys drive by me all week long and it just amazes me that nobody really came in and checked it out,â€ Johnson continued. â€œIt comes off the shore and makes a couple of real hard bends, and there are a couple of oxbows in it where there are two or three channels with humps in between. I was ledge fishing, but it was the ledges of the creek channel that dropped off. The fish sat on the edges of those humps in 11 to 13 feet of water. I really just banked on that one spot.â€

Johnson estimated that he caught 50 to 100 fish every day and said that his key baits throughout the week were black and blue- and green-pumpkin-colored ¾-ounce Strike King Tour Grade Football Jigs with Zoom Ultra Vibe Speed Craws with the claws dipped in chartreuse dye. He said that he made a key adjustment today by slowing down with a 10-inch crawdad-colored Western Plastics worm.

â€œI moved to Michigan from Southern California 10 years ago and a big part of that decision was so that I could get into professional fishing,â€ Johnson said. â€œI got held up a few years and I couldn’t jump right into the Tour, so I fished a lot of local tournaments and worked my way up. I took my shot this year and now here I am today. I think I proved that I belong.â€

For the second straight season, Livingston Lures pro Andy Morgan of Dayton, Tenn., wrapped up the Kellogg’s Angler of the Year title on Saturday. He narrowly edged out Repel pro Cody Meyer of Auburn, Calif., by just 9 points in a tightly contested race that thrilled fishing fans throughout the season. Morgan clinched the second Angler of the Year title of his career after finishing the tournament in 14th place. Morgan, who received $100,000 for the title, also will receive an automatic berth into the 2015 Forrest Wood Cup.

Jason Lambert of Pickwick Dam, Tenn., clinched the 2014 Walmart FLW Tour Rookie of the Year award Friday, which is awarded to the rookie pro angler who finishes the season with the highest point total.

Braxton Setzer of Auburn, Ala., was declared the 2014 FLW Tour Kellogg’s Co-angler of the Year early Sunday morning, just one day after the title appeared to have slipped through his grasp on Kentucky Lake. Jason Johnson of Gainesville, Ga., was declared the winner Saturday after finishing the tournament in 11th place. Unfortunately for Johnson, who has fished the FLW Tour as a co-angler since 2012, that all changed when it was discovered that he had made a cast from the front deck of Cody Meyer’s boat Saturday, a clear violation of FLW Tour rules. As a result of the infraction, Johnson’s catch for the day was disqualified, giving Setzer the Co-angler of the Year title.