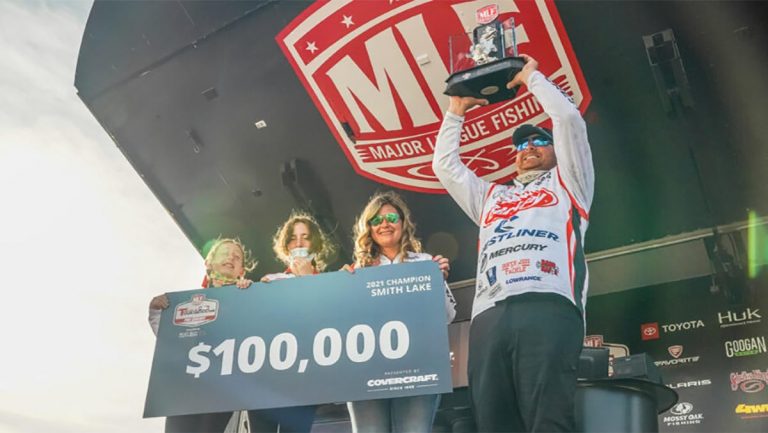 After leading the MLF Tackle Warehouse Pro Circuit presented by Bad Boy Mowers, Covercraft Stop 2 – Lewis Smith Lake for most of the event, it’s no surprise that Berkley pro John Cox of DeBary, Florida, pulled out the win on Championship Sunday. What is surprising – and long overdue – is a win for the angler on Lewis Smith Lake in Cullman, Alabama – a fishery that has been antagonizing Cox for nearly a decade.

The 2016 FLW Cup Champion made the Top 10 on Lewis Smith Lake several times in the past with the Pro Circuit, including two previous runner-up finishes, but has never been able to seal the deal – until now. The win put a $100,000 check in his pocket and added another piece of hardware to his already extensive trophy collection.

Pro Spencer Shuffield of Hot Springs, Arkansas , stalked the top spot throughout Sunday, making another big leap from seventh place into second with the biggest five-bass limit of the day – 17 pounds, 8 ounces – bringing his four-day total to 56 pounds, 11 ounces. Although bites were stingy for the entire field, Cox’s five-bass limit of 16 pounds, 10 ounces gave him a four-day total of 62 pounds, 4 ounces – and a solid 5-pound, 9-ounce lead to firmly secure the win.

Cox maintained the familiar strategy seen all week throughout the final day, refusing to allow himself to do what he does best – sight-fish. Ultimately that proved to be the right call for the event, but Cox said a gut check late in the day is what sealed his victory on the northern Alabama fishery.

“I was idling to check-in when I realized I still had 7 minutes left to fish and called an audible – I was feeling sick because it felt like it just wasn’t enough [weight],” said Cox. “I knew someone was catching them. So, I pulled over to this pocket and fired my jig right down the drain. A 4-pounder came out and hit it but didn’t take it – so, I killed it for a second and she ate it.

“I knew if I had a chance to win [a tournament on Smith] something magical had to happen. That was it.”
Cox said he spent the week throwing a black-and-blue Dirty Jigs Swim Jig teamed with a Berkley PowerBait MaxScent Meaty Chunk.

“I put the trolling motor on high and swam that jig in and around every piece of shallow cover I could find in the pockets and creeks far up Ryan Creek,” said Cox. “I threw the jig on a 7-foot, 6-inch heavy Abu Garcia Fantasista Premier rod and an Abu Garcia Revo EXD 8:1 reel.”

Cox said that rod and reel was a difference-maker, especially when the fish surprised him and he needed to pick up the slack.

“This has been a really special week in so many ways,” said Cox. “I love this place and love fishing on Smith Lake, even despite my history – so this win is incredible.”

The MLF Tackle Warehouse Pro Circuit presented by Bad Boy Mowers, Covercraft Stop 2 – Lewis Smith Lake will feature live on-the-water coverage and a two-hour action-packed television show that will premiere on the Outdoor Channel on Sunday, July 18 from 7 to 9 a.m. ET and re-air on the Sportsman Channel this fall.

In Tackle Warehouse Pro Circuit competition, the full field of 163 anglers competed in the two-day opening round on Thursday and Friday. The field was cut to 50 anglers on Saturday. The top 10 pros based on their three-day cumulative weight advanced to Sunday where the winner was determined by the heaviest accumulated weight from all four days of competition.

Throughout the season, anglers are also vying for valuable points in hopes of qualifying for the 2021 Tackle Warehouse Pro Circuit TITLE presented by Mercury, the Pro Circuit Championship, where they will compete for up to $235,000. The 2021 TITLE will be on the Mississippi River in La Crosse, Wisconsin on Aug. 17-22, and is hosted by Explore La Crosse.