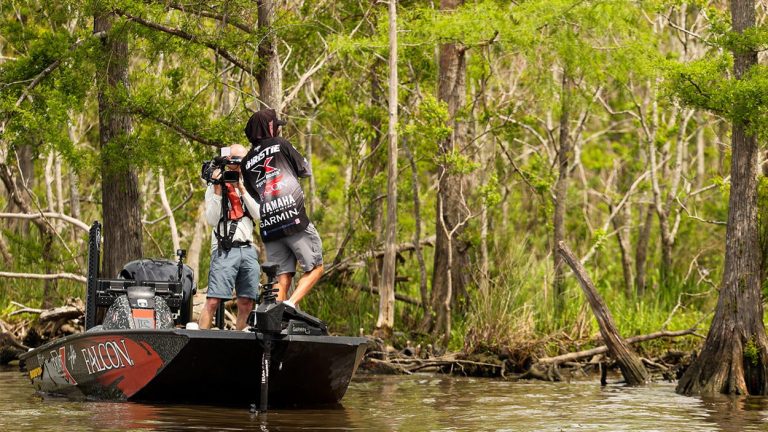 Sticking with a bold plan, but making key adjustments was the winning formula for Jason Christie of Park Hill, Okla., whose four-day total of 43 pounds, 15 ounces topped the Dovetail Games Bassmaster Elite at Sabine River sponsored by Bassmaster Fishing 2022 â€“ the official video game of B.A.S.S.

Claiming his sixth Bassmaster victory, Christie posted his best effort on Day 1 with a second-place limit of 15-1. He took over the top spot on Friday by adding 13-14 and held that position on Day 3 with a limit of 6-12. He closed the deal with a Championship Sunday limit that weighed 8-4.

After entering the final round with a 15-ounce lead over Day 1 leader Brock Mosley, Christie edged Mosley by a margin of 1-6.

For four days, Christie committed the majority of his time to a narrow creek about two hours upriver from takeoff. Locating the spot in practice, Christie recognized its mix of shallow wood and cut banks as prime bass habitat, while the distant run discouraged all but one competitor from fishing the area.

“There’s a lot of backwaters downriver from this area, but then there’s like a 20-mile stretch where there’s nothing until you get to this spot,” Christie said. “The first two days of the event it was super treacherous to run; there were logs, sandbars, stuff like that. That’s what kept people from going up there.”

After two strong days of skillfully picking apart the visible cover, Christie returned to his spot on Day 3 to find it 6 to 7 feet deeper. Increased water releases from Toledo Bend Dam swelled the upper Sabine and inundated his creek.

“Before the water came up, there were isolated targets and it wasn’t hard,” Christie said. “But once it came up, it was almost impossible. That’s why today I ran as far up that thing as I could.

“The further you get, the banks get higher and there wasn’t as much back flow coming from the river. That was my goal today â€” to get to where I could keep the fish between the bank and me.”

“With the largemouth, you had to lay it on the bank; it’s almost like their backs would be out of the water,” Christie said. “The spotted bass would be in the current around the eddies.”

While Christie’s 21-foot XPress aluminum boat was ideal for the shallow habitat he fished, fuel management was essential for ensuring he could make the return trip. After a strong Day 1 performance, he had to allow for the weight of a cameraperson and gear.

Removing approximately 150 pounds of tackle and 14 of his usual 20 rods helped, but Christie noted that the higher water of Days 3 and 4 slightly reduced his fuel consumption by allowing him to safely run a straighter course through the Sabine’s many turns.

Carefully calculating his fuel plan and running time, Christie allowed himself a generous return window each day. Reaching the takeoff area with approximately an hour to spare, he flipped shallow targets with a black/blue flake YUM Spine Craw.

On Sunday, that strategy allowed him to make two small culls that contributed to his winning margin.

The first three days, Mosley ran 110 miles west to fish Clear Creek on the east side of metro Houston. There, he did most of his work with a 1/2-ounce chartreuse/white Z-Man JackHammer ChatterBait with a white Yamamoto Zako trailer.

Mosley, who also placed second at the previous Elite on Pickwick Lake, switched his strategy and stayed closed to takeoff where he allowed himself maximum fishing time. Starting his day with a reaction bite inspired hope for a big outcome, but the opportunities never materialized.

“I caught my first fish on a spinnerbait and then I thought it was game-on, but I never got another bite on it,” he said. “I ended up catching my limit by flipping a Yamamoto Flappin Hog, then I picked up a frog and went to Adams Bayou. I had the bites, they just never connected.

“At 2:40, I came back up by takeoff and threw the ChatterBait. I had a big one pull off and that kind of stings. I fished as hard as I could; I have no regrets.”

Taku Ito of Chiba, Japan, finished third with 40-12. Turning in a solid performance that accelerated in the second half, Ito caught limits of 9-2, 8-5, 12-4 and 11-1. As he explained, the tough fishing of his Japanese home waters prepared him to capitalize on the late-day downturns, during which he excelled.

Seth Feider of New Market, Minn., leads the Bassmaster Angler of the Year standings with 341 points, followed by Patrick Walters of Summerville, S.C., with 333, Drew Cook of Cairo, Ga., with 317. Christie with 303 and Mosley with 302.

Bryan New of Belmont, N.C., leads the Rookie of the Year standings with 261 points.

As part of the Yamaha Power Pay program, Christie also earned $4,000 for winning while Ito claimed an additional $1,500 for being the second-highest placing entrant.