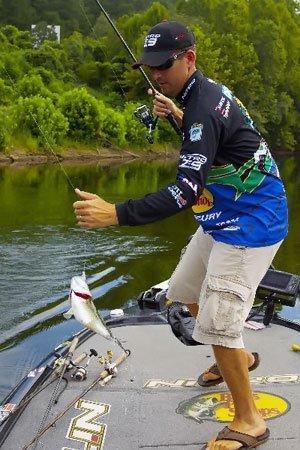 No one made a bigger splash in shallow water bass fishing this year than Bassmaster Elite Series pro Ott Defoe. The depth of fishermen, technology and tactics that have been introduced in recent years has heavily pushed the game offshore and convinced many aspiring anglers that tournaments can’t be won shallow year round. With the likes of Tommy Biffle and Denny Brauer appearing to be a dying breed, it is refreshing to see them get wins this year offshore, but it may be more intriguing to see a 25 year old come in to the Bassmaster Elite Series his first year and beat the banks like they used to and finish fourth in AOY points and win the Toyota Tundra All-Star week.

Finding a way to be competitive, especially in the upper echelon of bass fishing, typically means building on what you do best. By his own confession, Defoe only caught one of his weighed fish this past season in more than 5 feet of water.

â€œIt’s all about fishing your strength and fishing shallow is mine,â€ said Defoe.

During the spring and fall, a shallow bite is expected to play a part in how a bass fishing tournament unfolds. But how is Defoe able to excel shallow all year, even in the dead of summer? Attention to detail. The weather plays a huge part in when and why the fish are shallow. Defoe led the Elite Series event on Wheeler in June after a day one sack scaring 19 pounds.

â€œWheeler’s a prime example where most of the fish were supposed to be caught deep, and that’s where it was won like it should have been. However myself, Greg Hackney, Ish Monroe, Keith Poche and Kevin all caught at least some of our fish shallow.â€

The extremely hot weather and lack of rain led to rising water temps and very little current. When these two conditions merge on the Tennessee River the fish have to come shallow. Some fish will stay deep on current driven reservoirs like this but those are not likely to eat well. The ones that do move shallow are abundant and aggressive. This is what led to nearly half of the top 12 relying on shallow fish when timing suggested the fish would be deep.

The weather patterns also influence the amount of fish that will be found shallow all year. During the 2011 season, we experienced a long, drawn out spring across much of the country and that is something that played heavily into Defoe’s favor. A long spring stretches out the spawn and creates the perfect scenario for an angler to stay competitive shallow for a longer period of time.

However, no matter what the weather may bring, Defoe is sure that there’s always a reliable shallow bite.

â€œOn every body of water in the US, there’s enough fish to be caught shallow to finish in the top half of the field. Maybe not enough to make a top 12 but at least enough to cash a check.â€

Whenever Defoe is going to a place he doesn’t know, he finds it so much easier to fish shallow than to fish deep.

â€œI can cover water, I know what to look for, and when I get in an area where there are some fish, I feel like I’m going to know it,â€ Defoe said. Then I’ll go about actually figuring out how to catch those fish.â€

The â€˜what to look for’ is simple enough for Defoe. Visually he needs to see some sort of cover for the bass to get around, whether it’s overhanging trees, docks, wood or vegetation. Everything else works as a bit of a chain reaction. He likes creeks and tributaries in the summer because these tend to have some current. Current means cooler water and oxygen.

If there’s as little as a 2 or 3 degree temperature change on the surface, it can indicate a water temperature change of 10 or 15 degrees down below. The temp change ties into the oxygen levels. Cool moving water with more oxygen draws the baitfish in and inevitably sets the scene for bass to move in as well.

A lily pad laden pocket and a creek full of laydowns are hard visual indicators for a shallow water angler to pass up but sometimes moving on is the right move to make. If Defoe goes into a place that it is dead, meaning there is no water movement, no temperature change, and no indication of baitfish, he will still sample the area in practice but doesn’t waste a day there.

â€œI’ll give it a little bit of time even if all the pieces to the puzzle aren’t there,â€ he said. â€œBut that’s something I’ve gotten better at. In the past, if there was a place that looked good I would give it way to much time. If it seems dead it probably is and you just need to move on.â€

The â€˜weather’ and the â€˜what to look for’ only tell you where the fish are. Catching them is a whole other issue. What you throw isn’t nearly as important as how you throw it. For fish that are extremely shallow, less than 18 inches, presentation is everything. If you are fishing overhanging cover like trees or docks, the fish that is under there would likely bite a topwater, a flipping bait, or a spinnerbait. The key is getting whatever you’re throwing to the fish without spooking it and then triggering the strike.

If you lay it in there real soft, and as soon as it hits the water you do the right thing with it, the fish will probably bite a whole list of baits. The presentation is way more important than if it’s a black frog or a chartreuse and blue Pop R. Actually making a good quiet cast is way more important.

Longevity is one of the main drawbacks to fishing shallow in a competition setting like the Elite Series. It’s hard to squeeze multiple days out of a shallow bite so, for Defoe, running a shallow pattern is preferred to fishing a shallow area.

Although he did a little of both this past year, a shallow area only really works when fish are in transition or are residents to that area. In transition times you can blister them one day and go back the next and a whole new batch will move in. On the other hand, with resident fish, he has found its best to catch what he needs for the day and leave them since there are only a certain number that inhabit that area.

A shallow pattern is typically a lot more dependable. Once he establishes a bite based on wood or docks or whatever the cover may be, he can fish all over a body of water and target that specific cover. This style of running and gunning results in less pressure on the fish which, for a four-day event, will often result in a lot better finish.

Tools of the trade vary among shallow water specialist, but Defoe has a few that he won’t skim the skinny water without. A 1/2-ounce black Terminator buzzbait is one of his favorite baits to use when he is covering lots of water or in search of a big bite. He also covers water with Butch, his custom built shallow running crankbait which â€œis like no other.â€

If he feels like the fish are holding tight to the cover, he uses a Berkley Havoc Pit Boss to pick them off. And his final bait is another topwater that is dependent on the cover he is fishing.  If he fishes around a lot of floating leaves or grass, he’ll throw a Bass Pro Shops Black Kermy or Rebel P70 Pop R when the surface is free of debris.

For Defoe, the keys to shallow water bass fishing are pretty simple. Don’t overlook the small stuff like a slight surface temperature change or one log on a 100 yard flat. These are subtle clues that can lead you to better catches. Also pay attention to the weather.

Just because convention tells you that bass should be 20 feet deep doesn’t mean all bass are 20 feet deep. Bass do not have calendars, so they could care less what month it is. They capitalize and survive by adjusting to their habitat and so should you. And always remember, it’s not what you throw or even where you throw it but how you throw it that is the ultimate key to getting bit in the shallows.