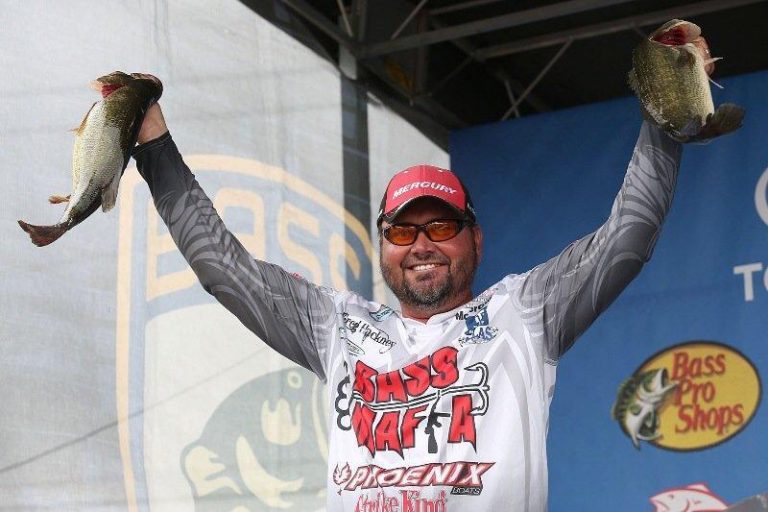 Who could be happy after not catching a limit in what is likely the most important bass tournament of your career?

He was grinning ear-to-ear Saturday after weighing four bass instead of the allowed five in the third round of the A.R.E. Truck Caps Bassmaster Elite at Cayuga Lake. But those four were solid largemouth bass that tipped the scales at 17-11. It was enough to keep a 10-ounce lead over his biggest threat, Todd Faircloth of Jasper, Texas.

Part of Hackney’s elation stemmed from knowing he still held the lead in the 2014 Toyota Bassmaster Angler of the Year (AOY) points race. After Saturday, Hackney had 15 points on reigning AOY Aaron Martens of Leeds, Ala., and 17 points on none other than the same guy also hot after the Cayuga trophy, Faircloth.

Hackney has never been this close to capturing the AOY title, which will be awarded next month when the Elite Series season wraps up in Michigan. Only twice before did he have a shot. He came closest in his rookie Elite year, 2004, when he finished in second place, three points behind AOY winner Gerald Swindle.

Closest to the two Cayuga leaders was Chris Zaldain of San Jose, Calif. Climbing from sixth place into third, Zaldain posted a three-day tally of 56-4. He trailed Faircloth by 4-13.

Fourth place was taken by Jacob Powroznik of Port Haywood, Va., at 55-11. In fifth place was first-day leader Brandon Palaniuk of Hayden, Idaho, with 54-7.

The field was cut to 12 for Sunday’s competition for a first prize of $100,000 and an instant qualification for the 2015 Bassmaster Classic.

Hackney’s third round on Cayuga Lake began just right. By 9 a.m., he had pulled four bass out of relatively deep water. In the third bite of a flipping flurry, he connected for a split second with a fifth bass. He said he reacted too fast and ripped the bait away from the fish.

Happy Hackney wasn’t allowing that â€œlostâ€ bass to haunt him.

â€œNaw, I’m not worried about that,â€ he said. â€œI’m right back where I want to be, so I can’t complain. I could say â€˜shoulda coulda woulda,’ but the lead is what it’s all about.â€

Wind was Hackney’s nemesis Saturday on Cayuga. â€œThe wind just pretty much blew my area out,â€ he said. Whitecap rollers caused the submerged grass to twist and wave. That spooked the bass out of the grass, he said.

â€œThen it (the wind) just got so bad out there, I couldn’t fish, so I moved up and started fishing shallow, but just couldn’t get bit shallow,â€ he said.

If the wind blows again in Sunday’s final round, he has a more protected place down the lake he hasn’t tapped into, he said.

â€œI had another good morning. We leaned on them pretty hard,â€ he said.

By â€œwe,â€ Faircloth meant Zaldain. As they have for three days, the two are sharing a honey hole, working it within casting distance of each other.

â€œI don’t know if there’s anything left there or not,â€ Faircloth said. â€œI’ve got a backup (for Sunday), and was able to cull one of my smaller ones off of it. But I don’t know that it has the potential for a win.â€

â€œWhen it’s cloudy early in the morning, I have to catch them out deep,â€ he said.

Faircloth, Hackney and many others in the Elite field now know they have one of 50 berths wrapped up for the $900,000 Toyota Bassmaster Angler of the Year Championship, Sept. 18-21 on Bays de Noc out of Escanaba, Mich. There, 29 Bassmaster Classic entries for the 2015 event will be finalized. Several more Elite pros below the 29-cut will also make it into the 2015 world championship due to double-qualifiers.

Hackney’s 23-1 bag of Day 2 held as the top contender for the Berkley Heavyweight award of $500.

Dean Rojas of Lake Havasu City, Ariz., caught Saturday’s the largest bass. A 6-4, it helped him into Sunday’s finals in 10th place.

In the event’s Carhartt Big Bass competition, the 6-6 largemouth caught by Powroznik on Day 1 continued to lead for the bonus of up to $1,500.