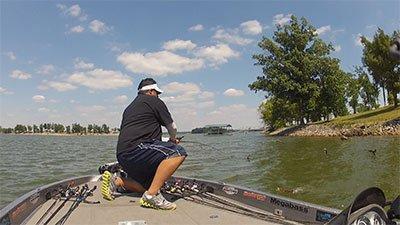 Video Transcript:  One of my favorite things to do in the whole world is to throw a frog for bass and a lot of people think it’s just for fishing around grass, it’s really not. That’s obviously my favorite way to fish one but I’ve caught a lot of fish around laydowns, boat docks, and this year I’ve caught a lot of fish around rip rap. I haven’t really done that in years past, but I found that’s a great place to throw a frog. As far as frog fishing though there is essentially two types of frogs that I, the way I classify frogs is you have frogs that slap and frogs that pop. Really either one can be made to walk which is the third application. As far as which one I use when I don’t know it’s kind of a experimentation thing, um I like the popping frog probably the best out of all of the frogs just I can walk it, I can pop it, I can make it flap, I can make it go back and forth, stay in place if I got an isolated piece of cover that I want to work. Frog fishing is pretty simple, you need a rod that has a lot of backbone because you’re usually fishing around pretty heavy cover and you need the fish to get out of the cover as soon as you set the hook. So you need a lot of backbone but you also want your rod to have a little bit of tip. So you can not only cast the frog but you can also make it walk. Make it do little dances and maybe work it quick do a couple tricks there around your piece of cover and then make it pause. So I like the tip to have a little bit of action I mean you can throw it on a heavy flipping stick  but it gets to be a little more cumbersome to work and cast so I defiantly like a rod with a little tip. As far as the length of the rod that varies, it depends upon you tall you are because obviously if you work the rod a lot of it is a downward snapping motion. You get a rod that’s real long you’re going to be banging it against the boat and hitting the water things like that can be kind of cumbersome. So each person has got to gauge it themselves, me personally I use a seven foot rod heavy action rod with a moderate fast tip. Always use braided line and really that’s for two reasons; one you need to get a good hook set usually over a piece of cover or through cover and the braid allows you to do that. And when you’re fishing around grass braid actually cuts grass like a knife. Where monofilament or fluorocarbon will kind of bend and just warp around it, wrap around the grass. Braid will actually slice through there when you set the hook so you definitely get better hook ups with the braid. I like 65 pound, I’ve been using FX2 Braid from Sunline, I also like the Vicious Braid, and the Sufix Braid I use all three of those and I like all three of those real well. Frogs I throw a lot, I throw the Spro Popping Frog probably the most but I also like the original Spro Bronzeye Frog. I throw several of the Vicious Fat frogs, Snagproof. I also like the Koppers frog I haven’t got to throw them as much I just started using those this year but I really like them because those frogs are really soft they got good hooks in them. The other thing with frog fishing is the strikes are obviously what makes it so much fun to fish. But the thing got to teach yourself to do is wait and not jerk at that big noise that big splash all of the commotion. A lot of times if you’ll pause for just a second they will actually tighten the line up for you where you can really drive the hooks that takes a little bit of experimentation and practice. Like I said earlier it’s one of the most fun ways I’ve found to fish, um I love to top water fish obviously. I really really like to throw frogs around heavy cover because not only do you get cool strikes but it really does catch big fish.

Get in here, Nice! There you go that’s what we love about frog fishing. They’re not all big ones but that’s a nice one. Basically heavy action rod, a good frog, good strong hooks, little bit of tip action in the rod, 65 pound braid, and you’re good to go.