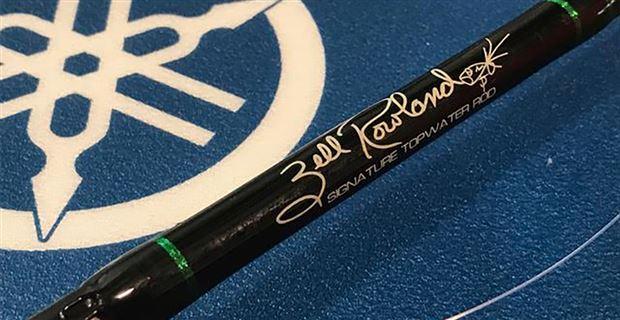 Zell Rowland is the master of the Pop R. He paints, tweaks, rubs and changes it to fit his style and between he and a few of his buddies like Gary Klein and Rick Clunn brought that bait back from obscurity.

In the early days Rowland was with All-Star and between his topwater rod and a flipping stick, he was able to stay on top of the leader board more often than not. He had a specific topwater rod developed that allowed the conical-shaped spitter to be cast better and because it had a slow taper, it allowed hooked fish to stay buttoned up much better. When he left All-Star he began the test of finding another rod of similar action.

That’s where the Impulse Zell Rowland Topwater Rod was born. 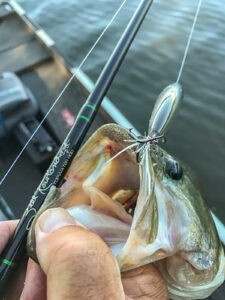 I got a call recently from Rowland and he asked if I would take a look at his two finished signature series Impulse Rods. Because I know the detail he takes as bass fishing’s head tinkerer, I wanted to get my hands on them.

The new Impulse Signature Series IMP68TW is a 6-foot, 8-inch moderate-action rod with Fuji tangle-free stainless guides and Alconite inserts. They also use a Fuji ECS exposed trigger reel seat on this model. It has a 8 3/4-inch split-grip handle and EVA foam grips. That means long casts, medium power, enough tip for a side-to-side action of the bait and plenty of sensitivity. .

This rod took a little bit for me to get used to. Initially it was a lot slower tip than I was used to and teamed with the 13 Fishing Inception I had a tough time getting it set correctly. Don’t get me wrong, I really like the combination but getting it dialed in took me a bit.

Just like launcher-style crankbait rods, I found that letting the blank do the work and letting it load made all the difference in the world.

Once I settled in, I loosened the anti-reverse to light and have zero backlashes. Initially that wasn’t the case. The parabolic style bend launches even smaller topwaters with ease and the work of the cast was cut down drastically. I found I was putting too much muscle into the cast rather than letting the rod and reel do the work. Once I figured that out, I could cast a popper until I ran out of line on the spool. Not really, but it sure felt that way.

When a fish bites on this rod, it doesn’t come off. That soft tip absorbs head shakes and dives of the bass and there is no horsing of fish with this rod. Keeping the line taught, steady reeling and letting the action of the rod do the work are the keys to getting them in the boat.

The soft tip also took some time for me to figure out. I like to work this style of bait quickly and noticed short twitches were the key. With other less forgiving sticks the action is imparted with the wrists, but with the Impulse Zell Rowland Topwater Rod I found it worked better with slight hand movements.

My index finger and thumb became the mechanism for the short twitches and my hands pretty much remained still. I can now cast this a mile and work it quickly to mimics a fleeing baitfish.

I have been using 12 to14-pound monofilament line for this rod and it matches perfectly. 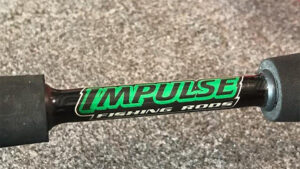 The more experience I get with today’s new class of rods and reels the more I find the bait as every bit as important as the rod you throw it with. Topwaters are usually thrown on extra-long broom handles by some anglers but having extra sharp hooks and the right rod can be significant over brute force.

The Impulse IMP68TW is, in my opinion, a topwater angler’s dream. Learning how to use this rod more effectively has made me a better topwater fisherman.

There are 26 models in this lineup and each have different actions but the feel remains the same. It’s clear that the devil is in the detail of these rods and the preciseness of the build is first rate.

This rod is so precise it may take anglers a bit of getting used to before they can use it effectively, but once you learn it and match it with the best reel it can make your topwater fishing like fly fishing to the expert.

The Impulse IMP68TW is in a new class of rods that some anglers may not like, but rest assured—it has found a home with me. This is one sweet stick.