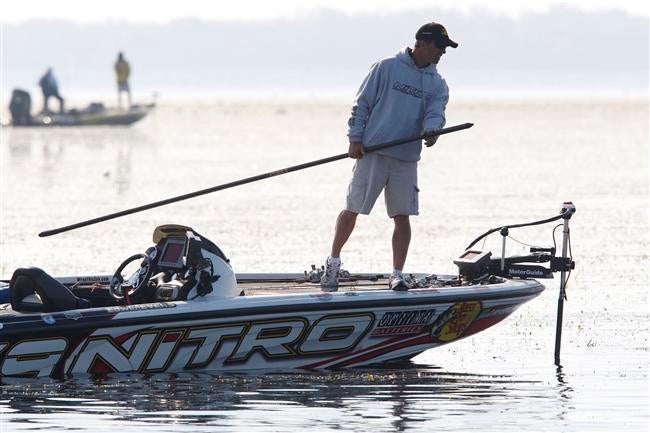 With a three-day total of 77 pounds, 1 ounce, Oklahoma bass fishing pro Edwin Evers shocked the crowd and favorites to win, namely Terry Scroggins and Alton Jones. Using a mix of sight fishing and mat flipping, Evers was able to remain incredibly consistent, never falling below 16 1/2 pounds on any one day of the four day event. His worst day was day two and after that everything seemed to fall into place for him.

“I started the first day in George. Probably 10 out of the top 20 were within eyesight of me. I prayed hard that night, and the next day I went 180 degrees another direction. Flipping Okeechobee Craw colored Mighty Bugs on mats in practice helped me locate an area where I caught a 3-pounder and felt like I had some big bites in practice. So I went back in there and there were big ones on the bed. In like 10 minutes I caught an 8 pounder. I burnt 220 miles of gasoline that second day and at the end of the day I saw some bucks. So I just hoped the females were coming.

“That big fish today, I found that fish the end of the second day. I saw here in Crescent Lake. I put that male in my livewell for a minute that I caught off the bed. Turns out I didn’t need it so I let it go. Today I caught the male and the female moved up.”

“I work hard at this. I’ve been known to stay out until midnight in practice scanning around. Those fish I found on Table Rock a few years ago, I found in the dark on my electronics and went back and caught them during the tournament. So it feels really good to do this in Florida, somewhere I’ve struggled. And it’s such a relief to already be qualified for the 2012 Classic!”

Terry Scroggins made a run at the trophy, with the only 20-pound limit of the day, but in the end came up 2 pounds, 14 ounces shy of his goal.

“I’m sorry I couldn’t get this win for you all, but maybe we’ll come back here, and I can make another run at it,” he said to all the fans in his hometown crowd.

Scroggins cranked, flipped and sight fished his way to the second place finish.

Scroggins, who gave Evers a little advice as the tournament began, also got a tip from another Elite pro in the top 12. Knowing he could not win, Casey Ashley stepped back from going to a big bass he’d seen in a canal, and gave the location to Scroggins. But when he got there, the fish was gone; but he found another nearby. It weighed 7-12, and was a key to his finish.

â€œWithout that, I wouldn’t even have come close,â€ Scroggins said.

Competing in his hometown, Scroggins said he was happy to do well, even if he ended as No. 2.

For Alton Jones, the wind on Sunday killed his Lake George sight bite.

â€œYou’re not going to catch the big ones unless you’re looking at them, so I was fishing for buck bass most of the day.â€

But he can find some solace in that his back-to-back Top 12 finishes gave Jones the lead in the Toyota Tundra Bassmaster Angler of the Year points race from last week’s event winner, Shaw Grigsby. Scroggins moved into second, Kevin VanDam is third, and Evers is in fourth place.

Berkley Big Bass honors of the tournament went to Jason Williamson of Aiken, S.C., whose 10-3 lunker from the first day withstood all challengers â€” and several of those were in the high 9’s. Williamson won a $500 bonus.