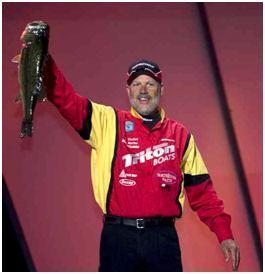 Boyd Duckett, the 2007 Bassmaster Classic champion and one of the top professional anglers on the ESPN BASS Elite Series tour, announced today that he has established an Alabama-based company that will produce innovative, high-end fishing rods that introduce microguide technology.

The new company, Duckett Fishing LLC, will manufacture rods that were created and tested by industry-leading designers and professional anglers. The ultra-lightweight rods â€“ called â€œMicroMagicâ€ – offer unmatched sensitivity and, because of the rods’ microguides, will allow anglers to significantly increase their casting distance and accuracy, Duckett said.

Duckett will use MicroMagic rods competitively beginning in February at the 2010 Bassmaster Classic. He added that other pro anglers will soon join Duckett Fishing’s professional staff.

â€œI can’t begin to tell you how excited I am about this venture. What we’re doing at Duckett Fishing is making rods that take existing technology to a whole new level. What we’ve done with microguides is extremely special and ahead of the curve. We developed these rods by getting a lot of input from custom rod builders who know what they’re doing. Then we combined that with the best kind of research and development â€“ on the water testing by pro anglers,â€ Duckett said.

â€œOur company slogan is, â€˜Driven by pros, not by profits.’ What that means is that our rods were developed literally by and for pros, so people who buy this rod will be getting a rod that professionals built and like. I’ll be fishing with them in the Classic. But the second part of this is that our decisions won’t be â€˜corporate-styleâ€ decisions. We don’t intend to cut corners and offer an inferior product. We’re committed to producing rods that truly help anglers.â€

As he established the new company, Duckett re-assembled the development team that created the award-winning prototype for Carrot Stix fishing rods, popular, light-weight orange rods. Duckett and designer Ken Whiting were instrumental in the initial development and branding success attributed to Carrot Stix.

Earlier this year, however, Duckett severed ties with the manufacturer and distributor of Carrot Stix: Toronto, Canada-based E-21. Duckett split with E-21 primarily because of what he described in a July 2009 news release as concerns â€œabout the general quality of the rods being made and how warranties are being honored.â€ In splitting with E-21, Duckett stated that the rods weren’t being produced as they were initially designed.

The split with E-21 prompted Duckett’s decision to create his own company. Whiting and E-21 executive Sean Schuyler have joined Duckett at Duckett Fishing.

â€œThis is the right thing to do. We have assembled a terrific team, and we’re hitting the ground running. We’ll have some exciting announcements over the next few months,â€ Duckett said.   â€œBut what is so significant is we finally have full control of quality and production and can offer the public innovation that’s not purely profit driven.â€

The 2010 Bassmaster Classic will be held in February on Lay Lake, near Birmingham, Alabama. Duckett won the 2007 Classic, which was also held on Lay Lake.

â€œIt will be pretty special to be using these new rods at Lay Lake during the greatest fishing tournament in the world,â€ Duckett said.

â€œI can’t over-emphasize how terrific it is to be working with the folks who are coming to Duckett Fishing, and I promise that we will work as hard as we can work to produce and deliver exceptional rods. Our goal is to offer anglers state-of-the-art technology that gives them an advantage on the water.â€

Although he had spent more than 20 years fishing competitively, Duckett burst onto the national stage in 2007 when he won the Bassmaster Classic and the Bassmaster Legends, a â€œmajorâ€ tournament. That year, Duckett set a single-season BASS earnings record. He also won the title at the 2007 Ultimate Match Fishing competition, a made-for-television event featured on the Outdoor Channel.