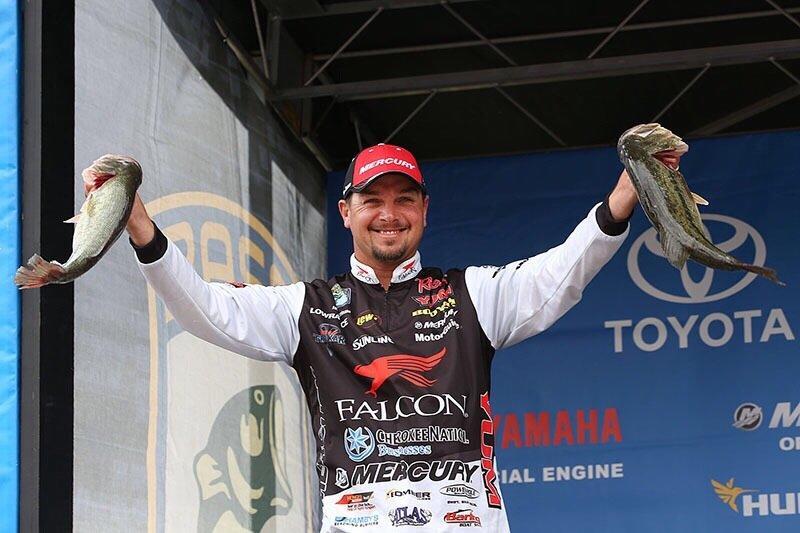 Jason Christie pulled off a 4-ounce â€œwonderâ€ win Sunday in the Bassmaster Elite at Lake Dardanelle.

It wasn’t a case of anyone thinking that a Christie victory would be a wonder. After all, the pro from Park Hill, Okla., was already an Elite champ from the 2013 season and has a very successful career going. It was Christie himself who was kept guessing.

â€œAt what point did you know you’d won this?â€ a reporter asked Christie, who had started out the championship round in fourth place.

â€œWhen they announced on stage I was the winner,â€ Christie replied. â€œTo be 3 pounds back and feeling like I needed low 20s (pounds) to win, makes the win special,â€ he said.

Christie produced a final-day weight close to what he thought he needed to win: 19 pounds, 2 ounces. His four-day total was 72 pounds, 3 ounces.

His margin of victory was 4 ounces over Gerald Swindle of Warrior, Ala., finishing in second place with 71-15 after producing the day’s largest weight of 20-1.

Greg Hackney of Gonzales, La., who led the field on both the second and third days, finished in third place at 71-11. Christie bested him by 8 ounces.

â€œI could go back and look at lost fish,â€ Hackney said. â€œI lost a 3-pounder one day, but that happens to everybody. But otherwise I fished clean this week.â€

Hackney said he caught a 4-pounder with five minutes left in Sunday’s competition. â€œBut I still felt like I was coming back short one big one,â€ said Hackney, who weighed 15-3.

Thanks to Hackney’s strong Dardanelle performance, he gained a lot of ground in the Toyota Bassmaster Angler of the Year race. Hackney had been in seventh place, 79 points behind leader Mark Davis of Mount Ida, Ark. Now Hackney trails Davis by one point.

Davis remained in the lead, a positioned he’s held for four events in a row. Davis had a 42-point advantage coming into the Dardanelle event, but his 81st-place finish almost erased that.

Rick Clunn, who started the final round at Dardanelle in second place, finished in fourth at 70-15. The bass fishing legend from Ava, Mo., had been just 13 ounces behind leader Hackney after Day 3.

Fifth place was claimed by Keith Combs of Huntington, Texas, at 68-3.

Christie described his climb up the leaderboard over the first three days as â€œsteady Eddie.â€ On Day 1 he was in 26th, Day 2 he climbed up into 10th, and by Day 3 he had gained fourth place.

Christie said his 26th-place start was the beginning of a learning curve.

â€œI was learning where they’re setting up, and what time of the day they’re feeding,â€ he said after Day 3. â€œI found there’s two times of the day when they’re really eating, and if you’re not around them at those times, you can fish right by them.â€

His main game keyed in on current in Illinois Bayou, he said, triggering reaction bites by swimming a jig.

â€œI saw every bass that came up and got it,â€ he said.

The lure he stuck with was a 1/2-ounce Booyah jig with a black-and-blue Yum Craw Chunk.

â€œI was fishing pretty dirty water, and that jig has really loud rattles,â€ he said. â€œI would stroke that jig, trying to get the big ones to react.â€

On his way back to check in each day, he would make a few stops in clearer water. There he would remove the jig’s rattles. He caught a 3-pounder that way one day, but most of his weight came from the stained water of the Illinois Bayou around vegetation by swimming the jig up high.

â€œEvery fish that bit didn’t come up to get it. They came horizontally,â€ he said.

Christie searched for larger bass by looking for matted weeds.

â€œAll of a sudden you’d see a point that had a mat. That’s a perfect place for a big one to be,â€ he said.

He hit transition areas between where bass are known to spawn and â€œchoke-downâ€ currents, where the channel narrowed.

â€œOnce I felt the current really, really get moving, I cast where the current hit it directly. Wind helped too. If I could get current and wind, that’s what I needed,â€ he said.

In the Bassmaster Rookie of the Year race, Chad Morgenthaler of Coulterville, Ill., took over the lead from Jacob Powroznik of Port Haywood, Va. Powroznik had had six points on Morgenthaler. Thanks to his 40th-place finish at Dardanelle to Powroznik’s 77th, Morgenthaler now leads by 31 points.