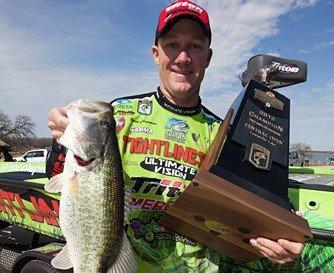 Fittingly for stingy Lewisville Lake, the fish-off Sunday came down to one bite. Brent Chapman got it, Josh Bertrand never did.
Chapman caught a 6-pound, 5-ounce largemouth and captured the Bass Pro Shops Bassmaster Central Open title in extra innings after the two anglers tied for the lead on Day Three and had to go into a tie-breaker fish-off on Sunday. On Feb. 11, Elite Series pro Chapman weighed in three keepers, and Bertrand brought one fish to the scales. The anglers finished tied for first with 20 pounds, 9 ounces.  The fish-off, from 7 a.m. to noon CST on Sunday, was the decider.
The tournament victory came with a berth in the 2013 Bassmaster Classic on Chapman’s home water: Grand Lake. The pressure is off for this year’s Elite Series, provided Chapman fishes the remaining two Central Open events.
â€œThis is a big weight off my shoulders,â€ Chapman said. â€œFirst, this tournament is over. The bigger reason is that I made the Classic and finally got another win.â€
The clinching bass very nearly never made it into the boat. Chapman was fishing a small creek that had warm water from a discharge running into the back of it. When he arrived Sunday morning, the current had disappeared, and the water was in the high 40s, a severe temperature drop.
â€œI didn’t know what to think,â€ Chapman said. â€œI honestly thought if there wasn’t water generation back there, it would be shot. I decided I had to at least make a pass and give it a try. After fishing for a short while without a bite, I remembered my partner a few days ago caught one on a wacky rig. On my third cast, I caught that one.â€
When he first set the hook, he thought the fish might have been a catfish or a drum by the way it was staying down. As it got closer to the boat, however, he realized just how big of a bass he had hooked. The fish fell for a wacky-rigged finesse worm.
â€œIf it had been the Elite Series without a net, I probably wouldn’t have caught that fish,â€ Chapman said. â€œI got that fish in the boat and the hook fell out of its mouth. If I wasn’t able to use a net, that fish would have gotten off.â€
The 23-year-old Bertrand was gracious in defeat, enjoying every minute of the excitement, but ready to get on the road home.
â€œSurprisingly, I’m happy that he won with a good fish like that,â€ Bertrand said. â€œIt was an exciting day. Obviously, I am disappointed I didn’t make it to the Classic, but a second-place finish on unfamiliar water is still an accomplishment.â€
After a huge first day, during which Bertrand caught 18 pounds on an umbrella rig, his catch tapered off significantly. The dam area that proved to be so productive on Day One got swamped by heavy north winds the next two days. Though he was able to get there again today, the water temperature dropped, and it didn’t produce.
â€œWith that big bag the first day, it’s been a stressful week, so I’m glad I’ll be able to relax on the way home,â€ said Bertrand, who hails from Arizona. â€œMy goal is still to qualify for the Elite Series. I don’t know if it will happen this year or in 10 years, but I’m going to keep trying.â€

So in the end the wacky-rigged finesse worm out-produced the castable umbrella rig for Central Open win and 2013 Classic berth for Chapman.

For more coverage of the event and full standings, check out  Bassmaster.com.