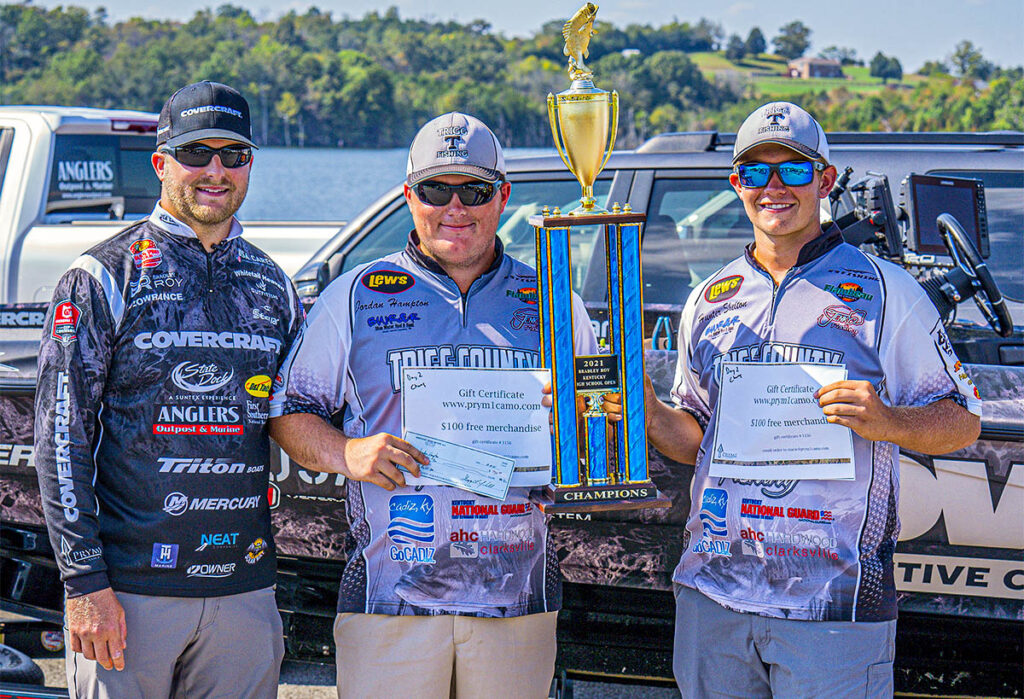 The 2021 Bradley Roy High School Open presented by Covercraft was likely one of the most challenging installments of the tournament’s nine-year history.

The winners weighed a bag of five fish totaling 9.45 pounds. The runners-up weighed in a bag of three fish for 9.05, which included the big fish of the event, a 4.16-pound largemouth.

Following the weigh-in, Roy gathered the top five teams and immediately cut off any information gathering from other teams about any surrounding lakes or Lake Cumberland. He then prepared all teams for a fish-off on Sunday at a mystery lake to be disclosed early Sunday morning.

The five remaining teams were housed at the Riverside Inn and geared up for a Major League Fishing Cup-style tournament the next day. The Bass Pro Tour angler convened the group in the parking lot at 4:30 CDT on Sunday morning and informed the group that the final day would again be fished on Cedar Creek Lake in Stanford, Kentucky.

“I picked Cedar Creek again this year as our mystery lake because it’s unexpected that we would return two years in a row,” said Roy. “We had only one top 5 team returning from last year, and I believe they were even surprised.”

The convoy made their way 77 miles up to Cedar Creek and prepared for “lines in” at 8:15 EDT. Each team was assigned boat officials trained by Roy and provided two sets of MLF-supplied scales. Teams were given thirty minutes to ride around on the 950-acre lake.

Roy streamed commentary on his social media pages as he covered the action. The teams fished two 2.5-hour sessions, with a thirty-minute break in between.

The conditions on Cedar Creek were sunny and unseasonably warm, creating an even greater challenge for the young anglers. Roy commented on his live stream that due to the tough conditions and fish seemingly still being in a summertime pattern, one big bass could catapult a new team into the lead in the late going. Despite catches in the final minutes from the Lake Cumberland and Boyle County teams, Trigg County’s lead was insurmountable. Trigg County clinched victory with a final weight of 5 pounds 4 ounces.

After confirming scores from all teams, Roy interviewed winners Jordan Hampton and Hunter Shelton. Roy asked Hampton if he thought they would be able to pull it off; he responded by saying, “Honestly, not with three fish. We didn’t think we would. But when we caught our first ones with a jig and then a Carolina rig, that’s what we’re used to back home, and we were going to fish it.” He went on to say that they planned to fish their strengths win or lose, Shelton agreed.

Following the event, Trigg County’s boat captain, Gary Houha, was very complimentary of the young anglers. Houha said, “I can’t say enough about them; both of these guys work very hard and have excellent support groups. They raised all of the money to allow them to fish various state and national tournaments, including this one.” He added that a big motivation for fishing this event for the third time was the opportunity to earn scholarships and fish at the college level.

“I am very happy we were able to make this event a success again for the ninth year. It is a huge highlight of my year to be able to showcase the talent Kentucky has on the high school level. One of the best things we’re able to do year after year is to reward our top anglers with college scholarships. I am very thankful to have relationships with colleges and sponsors that are invested in these young people as anglers but, more importantly, as students. I hope to see these anglers take advantage of the opportunities that they’ve earned and for this event to be as impactful as it is memorable,” said Roy.

Covercraft contributed to the scholarship fund and provided event decals for all anglers, coaches, volunteers, and family members.

“We are so proud to be the title sponsor for this event again this year. This event gives high school anglers an experience similar to what the pros have on the Bass Pro Tour, as well as earning awesome scholarships for their future. Covercraft not only gave the top finishers products we hope they enjoy but also contributed to the college scholarships that were given out. We proudly support high school fishing and this great event,” said Jeff Jegelewicz, Director of Marketing at Covercraft.

“We were thrilled to be able to host the Bradley Roy High School fishing tournament again and allow our local Bass Fishing team and other students around Kentucky to compete for scholarships,” said Nick Shearer, Russell County Chamber of Commerce, and the Mayor of Jamestown.