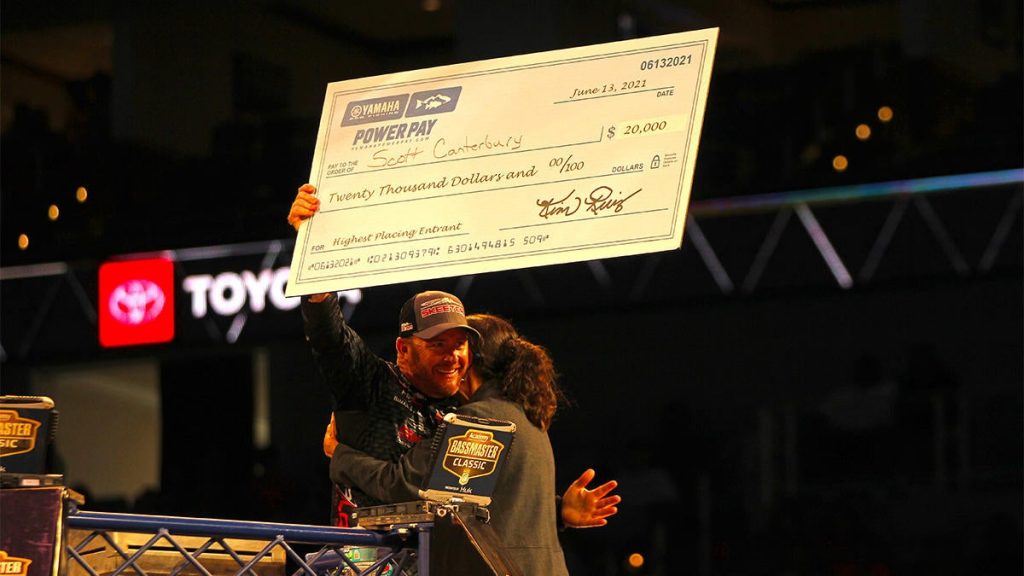 While the Bassmaster Classic’s top prize of $300,000 is keenly on the minds of fans and pros alike, the rather astonishing $20,000 Yamaha Power Pay bonus offered to the highest-finishing eligible Yamaha pro also created a pretty exciting ‘side pot’ at bass fishing’s biggest event, June 11-13 in Fort Worth, Texas.

When the Classic scales stopped spinning, Scott Canterbury proved you don’t have to place first to cash in on Power Pay. Canterbury finished 6th, just ahead of fellow Yamaha pros Drew Cook and Patrick Walters, to haul home the big bonus. He later admitted it wasn’t even top of mind until Drew Cook told him about it minutes before weigh-in.

“Drew was the first to congratulate me on winning the Power Pay money when we were outside Dickie’s Arena coming into weigh-in. He said something comical about his mistake leading to $20,000 slipping through his hands and into mine. That’s when I realized what an awesome bonus I was about to receive on stage from Yamaha,” he grinned.

Cook had the misfortune of bringing a bass to weigh-in that measured just barely short of a legal keeper, which cost him a penalty, allowing Canterbury to pass him in the standings.

“Whether you’re fishing for a living or just an avid local tournament angler like I was when I was still working as a plumber, you buy a Yamaha for its reliability and dependability,” said Canterbury.” And now that you can make a cash bonus for doing well in your event, I can’t think of a single good reason why a tournament angler would run any other brand of outboard.”

Anglers simply have to be the highest finishing registered participant in a Power Pay-supported tournament. Power Pay is not just for bass anglers – it also includes eligible saltwater, walleye, high school and college anglers (over the age of 18) through hundreds of events.

Introduced in the fall of 2019, Power Pay gives anglers the opportunity to receive compensation for running eligible Yamaha outboards. Eligible anglers running Yamaha outboards can sign up for the program by visiting yamahapowerpay.com. All applicants are required to accept and adhere to the Yamaha Angler Code of Ethics before completing the registration for the program. Once registered, the highest placing angler in specified Power Pay sanctioned tournaments that meets all eligibility requirements will be compensated by Yamaha accordingly.

For more information and complete terms and conditions about Power Pay, visit yamahapowerpay.com. Some restrictions apply. Void where prohibited by law.