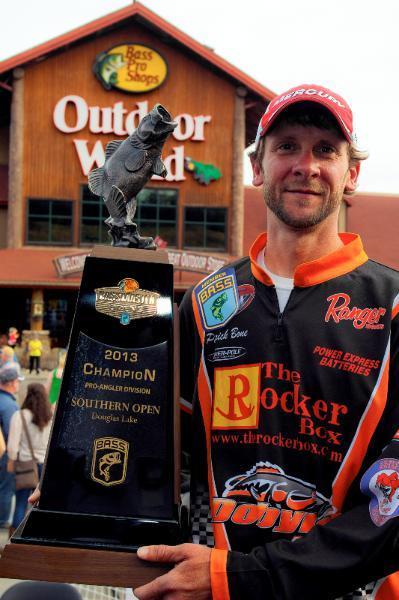 As predicted, the Alabama Rig dominated the Bass Pro Shops Bassmaster Southern Open at Douglas Lake in eastern Tennessee. However, the strategies for the Top 2 finishers couldn’t have been any different.

Patrick Bone of Cleveland, Ga., the second day leader, landed in first place with a 22-2 limit that boosted his total to 65-4. He stayed in one area of the lake and fished and refished four 100-yard stretches of bank with an A-Rig.

â€œThe most important thing I did today was stay focused,â€ Bone said. â€œIt was a real grind. I only caught six bass today.â€

Another key for Bone was holding his boat close to the bank and casting either parallel or at a 45 degree angle to the bank, keeping his A-Rig swimming in his most productive depth, which was 8 to 10 feet.

When Bone fishes the final Southern Open at Lake Logan Martin in May, he will also be invited to compete in the 2014 Bassmaster Classic to be held at Lake Guntersville, Ala. Any angler who wins a Bassmaster Open and fishes all three tournaments in the series qualifies for the Classic.

Mullins is intimately familiar with Douglas Lake. He finished fourth at a major tournament here the week prior to the Bass Pro Shops Bassmaster Southern Open. Mullins claims he never fished the same place twice through both tournaments.

â€œI stayed away from the places that got the most fishing pressure last week and hit underwater rockpiles 8 to 15 feet deep that nobody else knows about,â€ Mullins said.

The day started calm, sunny and crisp and gradually warmed to 70 degrees for the weigh-in crowd at Bass Pro Shops in Kodak, Tenn. The fans, the anglers and the bass found the weather agreeable.

â€œI caught my bass shallow all three days in 4 to 5 feet of water,â€ Kilgore said. â€œI fished from the dam to the I-40 Bridge.â€

The only woman to make the Top 12 final, Christiana Bradley, bagged a 21-5 limit. With 51 pounds, she leap-frogged from 11th to fourth place.

Bradley stopped fishing the last 30 minutes of the day to help her co-angler, Darien Craig, catch a bass to bring to the scales. Craig’s bass weighed 5-7, which made him the Carhartt Big Bass leader of the day.

Elite Series pro Greg Vinson should get an award for consistency. He caught four bass on all three days of the tournament to amass 48-15 and nab fifth place.

â€œI didn’t get many bites in practice, but they were big ones,â€ Vinson said. â€œI felt if I could catch five a day, I’d have a chance to win.â€

Mike Spears of Jasper, Ala., the co-angler leader after Day 2, caught 10-13. His 33-7 total was nearly 8 pounds more than Eulon Lee Jr. of Montgomery, Ala., who finished second with 25-10. Spears was awarded a Skeeter TZX170 boat and Yamaha F115LA motor combo.

One of the Top 12 finalists, veteran tournament angler Terry Segraves of Kissimmee, Fla., lost his final-round catch because of a rules violation and dropped to 12th in the standings. Tournament Manager Chris Bowes explained that Segraves’ Day 3 catch was disqualified for violation of Bassmaster Open Rule 6(iii), which states that â€œAll competitors are bound by the prevailing statutes and regulations of the various states in which they fish. Competitors are responsible for research of fishing and boating regulations.â€

According to Bowes, it was reported that Segraves caught fish on Saturday while using an umbrella-style rig with five hooks. Tennessee limits the number of hooks on a multi-lure rig to no more than three. Segraves told Bowes he briefly and inadvertently used a five-hook rig.