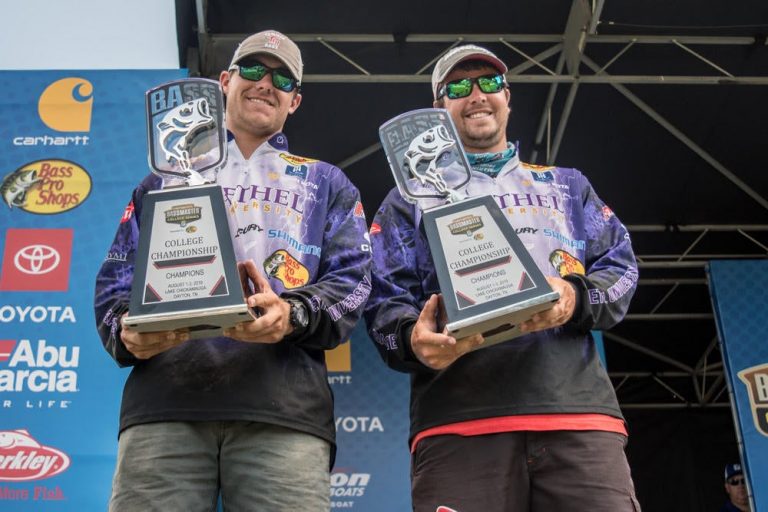 But during Saturday’s final round, they seized the spotlight and scored a come-from-behind victory on Lake Chickamauga.

McNeil and Floyd caught a five-bass limit Saturday that weighed 16 pounds, 3 ounces. That was their lightest bag of the week by nearly 5 pounds, but it gave them a 59-11 total, which was enough to sneak past Bryan College’s Cole Sands and Conner Dimauro for the title.

Sands and Dimauro led the first two days before slipping into second place with weights of 14-4 Saturday and 58-8 for the tournament.

McNeil and Floyd, who won a regular-season event on Arkansas’ Bull Shoals Lake earlier this year, collected $5,000 for the Bethel fishing team with the victory at Chickamauga, including $2,500 from B.A.S.S. and $2,500 from Carhartt. The Top 12 teams split a total purse of $24,000.

The victors jumped into the title fray with 22-6 Thursday, followed by a 21-2 limit a day later. While those weights positioned them for a shot at a championship, it was a spot on Chickamauga they didn’t fish until Saturday morning that proved to be the difference between winners and runners-up.

“If we don’t stop there this morning, we probably don’t win,” Floyd said. “Just the way it was laid out was good. It was the same depth we had been fishing (about 6 to 8 feet), but there was current there that came into play. There was grass. That place was the highlight of the tournament.”

They said those same worms were effective Thursday. But on Friday, a white and chartreuse spinnerbait was what the bass were biting.

McNeil said being in second place until the final weigh-in took the pressure off him and Floyd.

“Sometimes it’s easier being in second,” McNeil said. “You sleep a little better at night. You know you have nothing to lose.”

For Sands and Dimauro, however, second place was a disappointing end to what had been a phenomenal first two days.

The tandem from Bryan College, located in Dayton just a few blocks from Lake Chickamauga, jumped to the lead Thursday with a tournament-best bag of 24-9. They followed with a limit of 19-11 a day later, but their Saturday weight slipped like most of the 12 teams who made the cut.

The Bryan duo was gracious in defeat.

“It’s been an awesome week, but (McNeil and Floyd) deserve this,” Sands told the crowd gathered at Saturday’s weigh-in.

“A big shout out to those guys,” Dimauro added. “If we’re going to lose to anyone, it’s gonna’ be those guys. They’re the best in the game.”

The victory capped a fantastic week for Bethel, which is located in McKenzie, Tenn., about 250 miles west of Dayton.

McNeil and Floyd’s victory marked consecutive years that Bethel anglers won the College Series national title. Cody Huff and Garrett Enders won in 2018, and they finished third this week at Chickamauga with a three-day total of 55-2.

Also, Bethel’s KJ Queen and Dax Ewart were announced as winners of the Series’ Team of the Year for finishing first in the 2019 points standings.

The Top 4 teams in the championship (eight anglers in all) advanced to the Bassmaster College Classic Bracket event, which will be held Aug. 27-29 at Watts Bar Lake, also in Tennessee. They will compete individually in a head-to-head format with a berth in the 2020 Bassmaster Classic at Alabama’s Lake Guntersville going to the winning angler.

McNeil and Floyd fished in the 2017 Classic Bracket, and Huff and Enders competed in the 2018 event. It will be the first College Classic Bracket for the Sands/Dimauro team, as well as for Tyler Christy and Trey Schroeder of Illinois’ McKendree University, who finished fourth at Chickamauga this week. They were in 12th place heading into the final round, but jumped into the Final Four with an 18-7 limit that was the heaviest of the day.

Michigan State angler Riley Welch, who competed alone in the championship, won the Carhartt Big Bass Award and a $500 gift card for the 9-14 lunker he caught Friday. Sands and Dimauro’s 24-9 limit Thursday earned them the Bass Pro Big Bag Award and a $250 gift certificate.

A total of 116 teams from 62 schools competed in the Championship. Bryan College, the City of Dayton and Fish Dayton hosted the event.