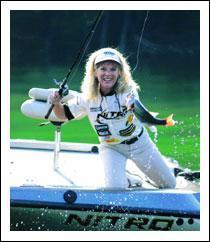 Penny P. Berryman of Hot Springs, Ark. passed in her sleep Sunday night after a hard-fought battle with cancer. Berryman is arguably one of the most recognizable faces of the early women’s bass fishing circuits, the Bass ‘N Gals and the Women’s Bassmaster Tour. Berryman, 62, was a former competitive water skier who turned her love for the water into a love for bass fishing by becoming one of the leading women in professional tournament fishing. Berryman was also a co-host of ESPN’s “Sportsman’s Challenge” and a 2004 inductee into the Legends of the Outdoors Hall of Fame.

She was a member of the Bass Pro Shops National Team for a number of years. She won the Bass ‘N Gals Classic in 1992 and the circuit’s Angler of the Year title in 1997. She notched four top-10 finishes on the Women’s Bassmaster Tour in its 3 year span.

“Penny Berryman cut new ground for lady anglers and I had the pleasure to know her both from her days at BassNGals and her long tenure at Bass Pro Shops and Tracker Boats” said Terry Brown, President of Wired2Fish. “Penny epitomized a pro through and through and was a class act who touched many lives on her journey. She will be missed.”