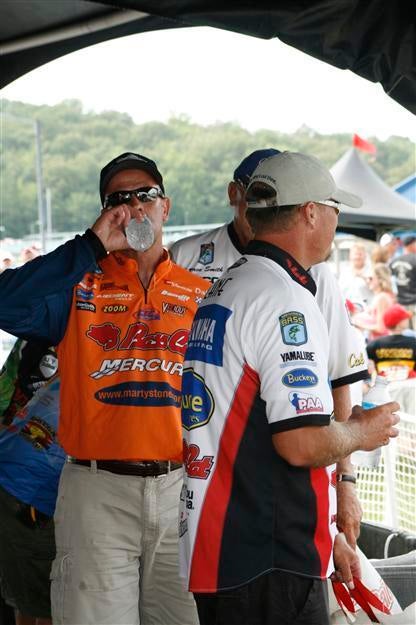 We were at the weigh-in today in Paris, Tenn. for the Bassmaster Elite Series event on Kentucky Lake and it was interesting to hear some of the stories from on the water today. Overall the bite was tougher than in years past. Only 11 anglers had 20 pound bags as opposed to the the 31 limits of more than 20 pounds in 2009 on day one. Two anglers (Kevin VanDam and Rick Morris) had limits weighing more than 25 pounds. Morris had a fish expire so he had an 8 ounce penalty that put him just shy of 25 pounds or else he’d be leading right now.

The story of the day was definitely crankbaits — and not just in the fish’s lips. Brent Chapman got a hook so deep in his thumb he had to take it off the bait. Then when he couldn’t cast with the hook there, he just cut it off at the bend and was going to look for some way to get the hook out of his thumb before tomorrow. Another angler caught one in his hand but was able to pop it out. And the worst one of the day was from local Mark Menendez of nearby Paducah. He was fighting a little bass to the boat and it popped loose as he swung it aboard. That fired the big plug like a pebble out of a sling shot right into Menendez’s face.
“It was scary,” Menendez said. “I felt the pain immediately and reached up and touched my face and blood was gushing.” He was able to remove the hook but stopping the bleeding was harder. “I couldn’t believe how much it bled. When it happened, I thought I was in real trouble.”
Menendez recooperated just fine and near the end of the day had another scary incident. This one ended much better. “I hooked a fish and it started pulling so hard I immediately thought I had fouled something big like a drum or catfish,” Menendez said. Then the bass rocketed to the surface and jumped. A giant, true Tennessee River smallmouth. The smallmouth was at least two feet long by Menendez’s estimate and on the scale the river smallie weighed 5 pounds, 1 ounce, the largest smallmouth weighed on day one. “That was pretty scary too for a minute,” Menendez said.
Biggest catch of the day — well that’s not what you expect. Rick Morris could argue he had the biggest catch today. Not only did he have the biggest largemouth of the day at 8-15, but he also would have had the biggest limit, had one of his bass not expired and an 8-ounce penalty was deducted from his total. But that wasn’t the biggest catch. That went to Aaron Martens.
“I caught a catfish that I thought was probably 90 pounds but really it was probably 60 or 70 pounds,” Martens said. Martens had to circle the boat three times to play the fish down to land it and try to recover his lucky crankbait. “That fish was as tall as I was and easily the biggest freshwater fish I’ve ever caught. This fishery is so healthy!”
Quote of the day —  “I’m behind in the points for angler of the year and the best way to catch up at an event is to get all the points.” — Kevin VanDam
Sorry fellas but it sounds like KVD is extremely motivated to get back in the race.
Thanks to those of you that stopped and said hello to us at the weigh-in. It makes the day when someone stops and says thank you. So thank you to you all for saying hello, that made my day!
Next