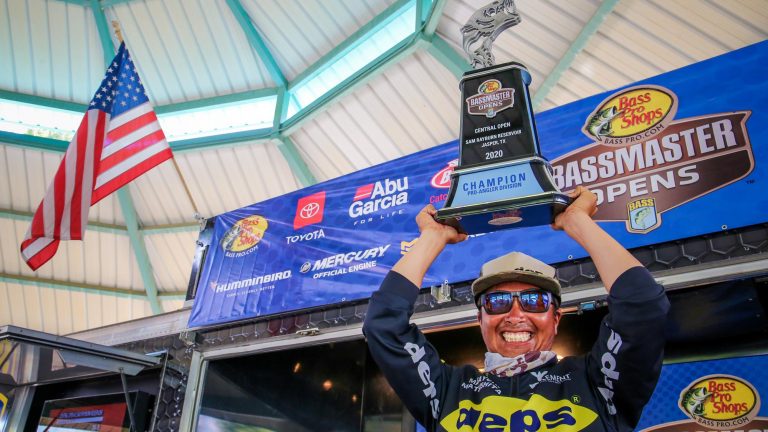 On Thursday, B.A.S.S. officials revealed the schedule for the 2021 Basspro.com Bassmaster Opens trail with a later start date than usual and a change in format from the past three seasons.

Instead of two divisions with four tournaments, this year’s Opens circuit will include three divisions â€” Southern, Central and Northern â€” with three events in each.

All nine tournament winners will earn an automatic berth to the 2022 Academy Sports + Outdoors Bassmaster Classic presented by Huk if they fish all events in their division. Additionally, the top three finishers from each division’s points standings will receive an invitation to fish the 2022 Bassmaster Elite Series, as will the top three from the overall standings accumulated in all three divisions.

“We’ve only been done a couple of weeks, but I’m already so excited about the 2021 schedule we’ve put together,” said Bassmaster Opens Tournament Director Chris Bowes. “This last season, with all of its stops and starts, was the hardest of my life. But I’m so proud we were able to get it all in. And every event was critical in a season that saw our Falcon Rods Bassmaster Opens Angler of the Year race decided by just one point.

“Now, after a short break, we can once again expect to see some of the most competitive Opens we’ve ever had.”

Since the 2020 Opens schedule was pushed back by the COVID-19 pandemic, it didn’t finish until the first week of December. As a result, the 2021 Opens schedule will begin in March instead of its traditional January start date.

The Southern Opens will start on the Harris Chain of Lakes in Leesburg, Fla., March 4-6, followed by events on Douglas Lake in Dandridge, Tenn., April 15-17, and Lake Norman in Charlotte, N.C., Sept. 23-25.

“It’s certainly nothing unusual for us to kick things off in Florida,” Bowes said. “But with this year’s opener in March instead of January or February, anglers will face some different challenges. Then we’ll get to visit Dandridge when we should have great spring weather and Lake Norman for a fall event â€” and we all saw this year how interesting fall tournaments can be.”

The division’s stop at Harris Chain will mark the 18th major tournament B.A.S.S. has held on the fishery since 1986.

“Lake County is excited to host the 2021 Bassmaster Southern Open on the Harris Chain of Lakes,” said Lake County Chairman Sean Parks. “We look forward to providing an enjoyable atmosphere for anglers and their families as they experience the hospitality and charm of real Florida.”

The Central Opens will begin April 1-3 with a trip to Lewis Smith Lake in Jasper, Ala., followed by events at Pickwick Lake in Counce, Tenn., April 29-May 1, and a stop at Grand Lake in Grove, Okla., Oct. 21-23.

Smith is known as one of the top spotted bass fisheries in the country, while Pickwick offers the typical Tennessee River mixture of largemouth and smallmouth. Grand Lake has been the site of two Bassmaster Classics, most recently in 2016.

“You talk about variety,” Bowes said. “The three tournaments we have scheduled for the Central Division will test anglers’ versatility about as much as three events can. Anglers who can go from a spotted bass haven to a Tennessee River fishery to a diverse setting like Grand Lake â€” and do well in all three â€” will have proven their abilities beyond the shadow of a doubt.”

This will be the Opens Series’ first stop in Pickwick, and the community is looking forward to welcoming anglers.

“We are excited to welcome the Basspro.com Bassmaster Opens to Pickwick and Hardin County,” said Beth Pippin, Tourism Director for the Hardin County Convention & Visitors Bureau. “Pickwick Lake is known for great fishing and scenic beauty that we locals get to enjoy every day! Hosting this tournament will allow us to showcase our beautiful area with national media exposure. It’s a win-win for everyone.”

Just as temperatures are rising in the South, the Northern Opens will kick off on the James River in Richmond, Va., May 13-15. That event will be followed by two New York tournaments, the first on Oneida Lake in Syracuse July 29-31, and the second on the St. Lawrence River in Clayton Sept. 9-11.

“We’re excited to welcome some of the fishing world’s best anglers as they compete on the historic James River,” said Jerrine Lee, Director of Sports Development at Richmond Region Tourism. “Our region is proud to once again serve as host for this exciting event and can’t wait to cheer on participants at weigh-ins.”

The James River has hosted a B.A.S.S. Open five of the past six years, and Oneida has hosted seven Opens since 2010. The St. Lawrence River and 1000 Islands area has been one of B.A.S.S.’s most frequently visited tournament venues â€” for everything from high school contests to Elite Series events.

“The James River is a tidal fishery, and that always presents a different set of circumstances for tournament anglers,” Bowes said. “Then, when you talk about New York during the summertime, it just doesn’t get much better than that for bass anglers.”

The payout per event will be $250,400 (based on a field of 150 anglers), giving the nine-event circuit a total payout of more than $2.25 million. In a change from previous seasons, the full field will fish the first two days, with the winning co-angler being named after Day 2. The final round will feature the Top 10 pros.

Registration for pro and co-anglers will begin online January 12, 2021 for B.A.S.S Nation and Life members and Jan. 14 for B.A.S.S. members.

“With the difficulty of scheduling during the COVID-19 pandemic, we’re leaning heavily on our established partners,” said B.A.S.S. CEO Bruce Akin. “The result has been a schedule with a lot of familiar venues, but one that will challenge anglers’ abilities like any Opens schedule should.

“The 2020 Opens season was one of the most competitive we’ve ever seen, with an incredible mix of veteran pros and hungry, up-and-coming young anglers. We expect the 2021 season to be even more exciting.”

Booming interest and participation in the Opens led B.A.S.S. to expand coverage of the tournaments, including real-time scoring updates and a live streaming show with commentary by Bassmaster Elite Series anglers. These popular changes will continue in 2021.

“When we restarted the Opens season on the Arkansas River in June 2020, both boaters and co-anglers began using BASSTrakk,” said Jim Sexton, B.A.S.S. VP of Digital. “During the remaining six Bassmaster Opens tournaments, this became the most popular page on our website. As more anglers become comfortable with the technology, we hope folks on both ends of the boat will update their catches because it helps us provide even more exposure on the site.

“Fans also responded enthusiastically to the new Bassmaster Opens LIVE show as camera boats provided coverage of the leaders, streaming more than 6.8 million minutes of on-the-water and weigh-in action. It was the perfect way to learn from the anglers while they broke down tough fisheries in a variety of conditions and seasons. In 2021, those cameras will be in the boat with the pros on the final day.”