Professional bass fishing angler Cody Meyer appears to have caught the next world record spotted bass on Friday, Dec. 16, 2016. The fish was caught on video and the weighing and certification process has been witnessed, photographed and videoed with the help of JR Wright, who Meyer was fishing with, and Tim Little, the current California State Record spotted bass holder.

Meyer posted early this morning on his Cody Meyer Facebook page the following:

“What an amazing day. I went fishing with my buddy JR Wright, and ended up catching a 10.80-pound spotted bass today. It has the potential to be a World Record. I am really thankful that I have sponsors who make the best gear in fishing. A fish like this on light line took every bit of technology I had in the boat. I was using one of my prototype Daiwa  Tatula rods, which is a signature series coming out soon, a Daiwa Exist reel, 6-pound Seaguar Tatsu Fluorocarbon line, a Strike King Lure Company Ocho. I spotted it suspended over 100 feet of water using Garmin Panoptix. Being able to see them out in front of us before we moved over them made it possible. In total, our best 5 spotted bass weighed more than 40 pounds.

Here are a few photos. Thanks to Tim Little the current Spotted Bass World Record holder for driving up on his day off and helping me get it weighed on a certified scale and for taking some better photos. Video coming soon!”

EDITOR’S NOTE: Meyer’s fish will be pending certification by the IGFA for state and line class record status. We will update when we know more. There is also another angler, Wes Roberson who caught an 11-pound spotted bass in January of 2016 that is also pending world-record status. So it’s unclear how all this will shake out on the officially certified level. The current certified IGFA record is held by Tim Little at 10 pounds, 6 ounces, although Paul Bailey caught an 11-pound, 4-ounce spot last December that was not certified because it was not weighed on land.

And then there is the somewhat missing story of Louis Ferrante who is listed as the California State Record holder at 11-pounds, 3-ounces for a spotted bass that was said to have been caught Feb. 21, 2015. So who gets world-record status is much less of a sure thing than most people think. One thing for sure, California kicks out some monster spotted bass. And this cycle of giant spotted bass may never be seen again in our lifetime. Meyer has been catching big spotted bass in California for more than a decade. He has put in a lot of hours and time studying and fishing for them. This is a longtime coming. Congrats Cody Meyer on the fish of a lifetime!

More high resolution shots on Cody’s fish are on his Facebook Page: 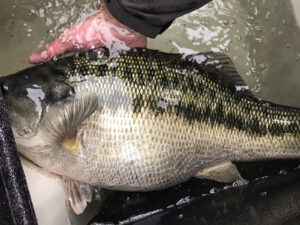 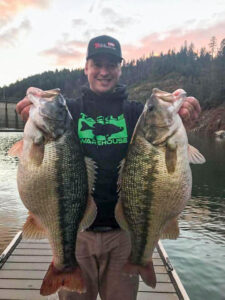