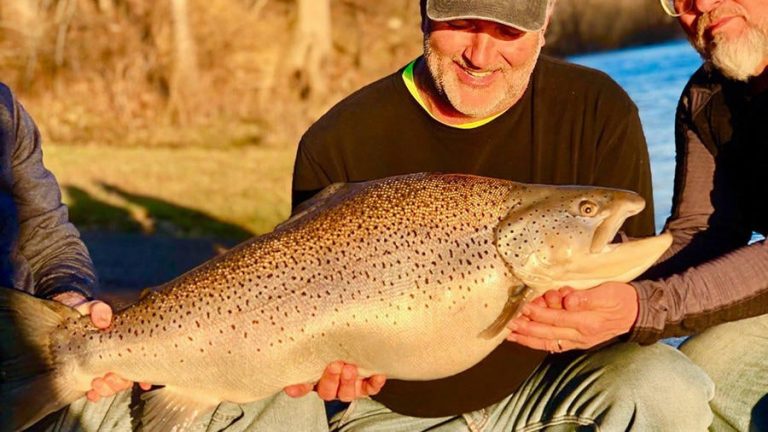 The Missouri Department of Conservation (MDC) reports that Paul Crews of Neosho became the most recent record-breaking angler in Missouri when he hooked a brown trout on Lake Taneycomo using a rod and reel.

The new “pole and line” record brown trout caught by Crews on Feb. 23 weighed 34-pounds, 10-ounces. The new record beats the previous state-record by 6 pounds and 2 ounces. Crews was fishing with 4-pound test line and a sculpin colored marabou jig.

“I never would of have dreamed to catch a state-record fish like this,” Crews said. “I’m still in shock that I actually caught that giant brown trout.”

Crews noted that he and his partner Jim Rayfield Sr. were out fishing in the Vince Elfrink Memorial Trout Tournament when he caught the state-record brown trout.

“I usually only trout fish one time a year and it’s this tournament,” Crews said.

Crews said once he hooked the fish he wasn’t sure it was that large until it began fighting.

“I fought the fish from one side of the lake to the other and back,” Crews said. “Finally, after about 20 minutes of fighting the trout, my partner and I were able to get it netted and bring it in the boat.”

Crews added that he knew the fish was big once it was in the boat, but he never really thought much about it being a state record.

“Once the fish was in the boat I just knew my partner and I won the tournament,” Crews said. “But I was shocked to hear I was a state record holder.”

Crews said he took pictures and got the dimensions of the fish to make a replica, and then released the giant brown trout back into Lake Taneycomo

Close up of record trout

Paul Crews with his fish of a lifetime.