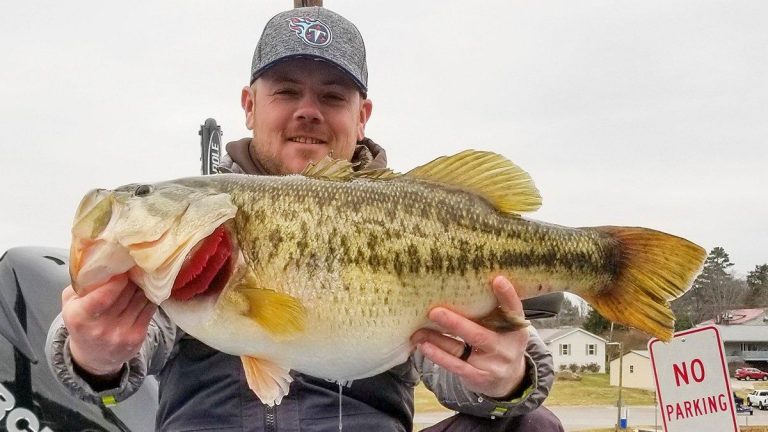 On Sunday, December 31, 2017 Todd Beaty caught the big bass of a lifetime for many anglers while fun fishing with a friend on Lake Chickamauga in Eastern Tennessee. The largemouth bass was weighed on official scales at 14.53 pounds, Beaty’s best bass and maybe the largest we have ever seen caught on the last day of the year. Talk about ringing in the new year right!

Beaty was throwing a YUM Yumbrella Flash Mob umbrella rig with Reaction Innovations Little Dippers on 20-pound P-Line fluorocarbon on a Duckett 7-foot, 10-inch XH power rod with a Lew’s baitcaster. His Phoenix Boat was sitting in 17 feet of water off of a deep main lake channel, and he guess the fish bit in 5 to 7 feet of water up on the ledge around 10:30 a.m. Sunday morning. It was an overcast day with temperatures in mid 30s and a water temp of 46 degrees.

“Man it all still seems unbeliveable,” Beaty said. “I never in my wildest dreams thought about catching a bass that size but Chickamauga for sure has some true giants! I fish in the winter quite often as I’m only an hour and a half away from Chickamauga. But come spring, I’m usually fishing a lot of tournaments all over and don’t get to visit Chic’ very often.”

That’s definitely a great fish to kick off the big bass season. Here’s hoping we see a lot more big catches from anglers this winter and spring!