Nick Tassoni of Rockford, Ill., thought Saturday Jan. 7, 2012 would be like any other fishing trip he’d been on since he was old enough to hold a rod. Nick and father David towed their boat down to Pecatonica River to begin another day of winter fishing in Illinois. The caught a 2-pound walleye right off the bat but then the action slowed, at least for walleye.

For most of the day they trolled snagging only buffalo and carp. As the action slowed, Nick went to the bow of the boat and lay down to take a nap. After about 20 minutes, he awoke hungry and cold. He asked his father if they could leave, and his father informed him they would be on the water until dark. Nick relented and picked up his rod to start fishing again.

His rod was his father’s Falcon Lizard Dragger II that was paired with an old Abu Garcia Ambassador 5000 that was Nick’s grandfather’s reel. The line was Berkley Trilene monofilament that Nick estimated to be more than 10-years old because it was his great grandfather’s line. Nick’s great grandfather founded a local walleye fishing club in Rockford many years ago and Nick and his father David were raised to love the outdoors and fishing.

Nick unhooked his Rapala Minnow Rap in Fire Tiger and cast his line out. It wasn’t 30 seconds, and Nick was fighting another fish. Because of the weight and fight of the fish, Nick assumed it was another carp or buffalo until a big walleye surfaced out in the distance. Nick’s father grabbed the net as the fight got a lot more serious. After a brief struggle the duo netted the monster walleye.

After a short discussion, both agreed they would not be fishing until dark and headed for the nearest certified scales to get an official weight. The closest scales were at the town grocery, Pinnon’s. They raced to Pinnon’s with the fish and called DNR officer Brian Alt to meet them with what might be the potential state record walleye.

As they weighed the fish and held it waiting at the meat counter in the Pinnon’s a crowd of people had surrounded the counter applauding and cheering the young angler’s accomplishment. Officer Alt recorded the information and filled out the necessary paper work while they prepared to have the fish certified by state biologist, Dan Sallee.

Sallee would not be able to certify the fish until the following day, so Nick and his father knew they needed to keep the fish alive as long as possible. They called a friend with a horse trough and they took the horse trough back to the river to fill it up with 200 gallons of water from the fish’s natural environment. That night they stayed up with their hands in the water trying to keep the walleye upright and alive.

The fish lasted until 8 am the next morning with Nick holding the fish upright in the water until his hands were too numb to feel anything anymore. His father took shifts with him trying to keep the fish alive.

Sallee arrived on the scene that following afternoon and certified it as the new Illinois State Record Walleye at 14 pounds, 12 ounces with 20 1/4 inches girth and 31 inches length. Nick broke the 51 year old record caught in the Kankakee River in 1961.

“I want people to know that I’ve been fishing ever since I was old enough to hold a rod and reel,” Nick Tassoni said. “I believe that getting fishing instilled into the hearts of youth like me should be priority one. Things like starting a walleye division in the Illinois High School Fishing Association and focusing on the importance of keeping harmful invasive species out of our fisheries will improve fishing for everyone. But most of all I think we just need to get people out and fishing!”

From all of us at Wired2Fish and the hundreds of thousands of our closest friends and fans, Nick, you’re definitely setting a fine example for the rest of our youth! Well done! 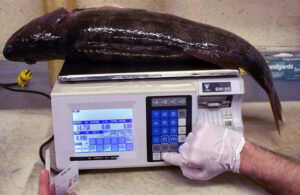