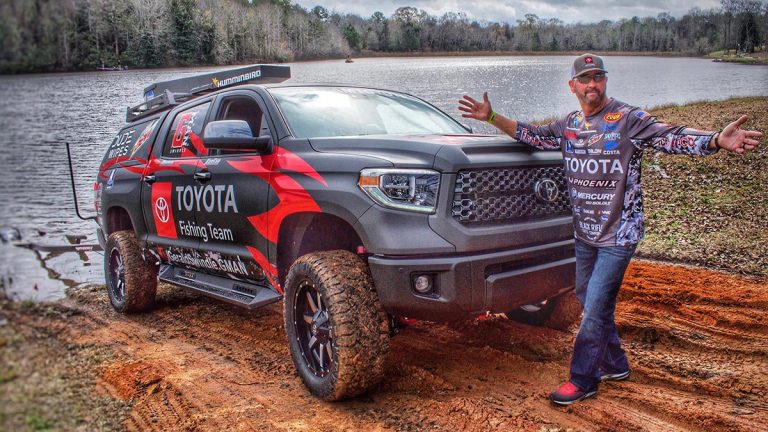 While Gerald Swindle is eager for tournament competition to be given the green light, the hilarious Bassmaster Elite Series veteran is holding up alright. Between projects on his farm, working in the shop, ample time on the water, and chasing around grandbabies or the occasional turkey Swindle is staying plenty busy.

The Team Toyota pro usually averages a couple thousand miles a month behind the wheel of his Tundra this time of year, but like most of us Swindle’s travels have come to a halt. The “G-man” and his faithful shotgun rider “LuLu” have compiled a few hundred miles in total during this whole deal driving back and forth from their Lake Guntersville home to their farm near Smith Lake in Northern Alabama.

His Phoenix bass boat stays loaded-for-bear, but don’t think for a minute that Swindle rolls around in his Tundra unequipped. Swindle keeps a small ’emergency stash’ of fishing tackle, including three rod and reels, in his truck at all times and thinks you should, too.

With many of us having a little extra time on our hands, you never know when you’ll have the opportunity to wet a line. Swindle laid out what he hauls around in his Tundra as only bass fishing’s funniest man can.

A ChatterBait AND spinnerbait setup

When it comes to his mobile fishing supply, Swindle is pretty particular. He opts for versatility in both rod and reel combos and the baits he carries with him to avoid lugging around half a tackle store.

“I take the bare necessities only, I don’t try to take the whole tackle box,” Swindle said. “But whether I have some time to kill at a pond or my nephew Trey calls wanting me to hop in the boat with him for a few hours, I always keep some gear in the truck.”

I pushed him to narrow it down to one combo, but Swindle explained that “just ain’t true”. He keeps two casting rod and reels with him at all times.

One being a 7-foot glass rod specifically for slinging ChatterBaits, and the other is a 7-foot, 3-inch medium-heavy Ark Casting Rod he typically keeps a spinnerbait tied to. Though Swindle won’t hesitate to swap the spinnerbait for a 3/8-ounce Buckeye Ballin’ Out Jig if the conditions call for it and he’s feeling funky.

“If you don’t have a spinnerbait or a ChatterBait tied on this time of year you’re messin’ up,” Swindle joked. “In all seriousness, those techniques cover a lot of your bases. They are good around grass, wood or rock and they’ll catch a pond bass just as easily as they’ll fool a Lake Guntersville five pounder.”

Both of Swindle’s truck bed combos are paired with 6:4:1 Lew’s reels with spools full of 16-pound Sunline Shooter fluorocarbon. Swindle trusts those combos in any scenario and urges you to add something similar to your arsenal.

In a perfect world Swindle would power fish everyday of the week, but when it comes to getting a bite he knows the power of a good spinning rod and reel.

“I don’t go anywhere without a spinning rod,” Swindle admitted. “I keep a 7-foot medium-heavy Ark spinning rod with medium-sized Lew’s reel for slinging shaky heads and wacky rigs with me at all times. Whether you’ve got clear water, pressured fish or you just like setting the hook it’s hard to beat those presentations. Keep a few VMC Neko Weights with you and you’re ready for anything.”

As far as Swindle is concerned a 3/16-ounce shaky head, a few VMC Ike Approved Neko Hooks, a pack of Zoom Beatdown and Zlinky stick worms paired with a can-do attitude will catch a bass anywhere. He prefers 10-pound Sunline braid for his base line and keeps a spool of 10-pound Sunline Shooter fluoro to tie for his leaders.

“I can have fun and keep myself occupied for hours with these setups,” Swindle explained. “Hey man, I might not win a tournament with those three rigs but they’ll catch fish anywhere in the entire country. I’ve even been keeping some 6-pound monofilament leader line and a handful of crappie jigs with me this time of year – just in case!”

You never know when an opportunity will arise to make a few casts and it’s certainly better to have it but not need it, than to need it and not have it. Follow Swindle’s lead and add some fishing gear to your vehicle this spring while we continue to #FishSmart, be responsible and use common sense.