Zoom just released the new 5-inch Swimmer hollow-bodied, paddle-tail swimbait in the past couple of weeks in preparation for the Classic launch. The shape and profile has been refined for more than a year with input of avid swimbait anglers and tournament professionals to get it exactly right before coming to market. They come in a bunch of great colors (our favorite is hitch right now). They come 3 to a pack and should retail around $6-7. You can check them out at ZoomBait.com.

John Crews and Mike Iaconelli have been working on building better mouse traps when it comes to jigs that are tournament ready and tournament proven to work in the toughest and most competitive fishing environments with highly pressured bass. Their new Head Banger jig offers a football jig that comes through rock and wood cover remarkably well. They will offer it in 1/2, 3/4 and 1 ounce sizes for around 5 bucks. You can check them out here. 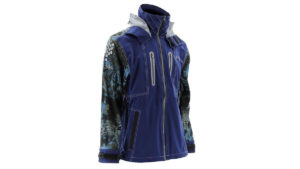 Huk Performance Fishing Gear is really stepping up the apparel game with functional and fashionable fishing gear for serious anglers. Their new Next Level Kryptec shirts and foul weather gear is legit. We’re pretty excited about these new suits and can’t wait to get our hands on some of the new gear for the rainy spring fishing season. The jackets retail for $349 but they are showing at a sale price right now on the Hukgear.com website.

Strike King added a great jerkbait to their lineup of proven bass catchers a few seasons ago and followed it up this week with the new KVD Deep jerkbait that will reach an astounding 11 feet on a long cast. It features a very wide pattern of erratic darts on the retrieve and can cover a lot of the water column on a single cast. Their internal weight system allows you to get maximum distance on a cast making this a great jerkbait for covering a lot of water.

The KVD Deep jerkbaits feature three sharp treble hooks and come in 15 great colors for around $9. You can check them out here at TackleWarehouse.com.

Rapala extends their impressive lineup of bass fishing jerkbaits with the new Shadow Rap Shad and Shadow Rap Shad Deep. Building on their successful Shadow Rap platform, the new Shadow Rap Shad offers a much larger profile and more threadfin shad appeal. It also offers a unique upward position with an ultra-slow rise. The bait actually rights itself in a nose up position after a jerk and pause so it’s actually still moving even when it’s just sitting there. It has a real erract dart going sideways as well as up and down. It can turn a complete 180 twitched on slack line.

The also are offering new matte finishes called Frosted Finishes that are very appealing in orange, blue, green, purple and olive hues to match any water clarity and stain. These baits will complement the Shadow Rap which has a neutral to slow sink. They will be priced around $8.99 a bait making them a very affordable yet high-quality jerkbait for bass fishing this year. You can see more about these baits in this video and on the Rapala Shadow Rap Shad page and at TackleWarehouse.com. 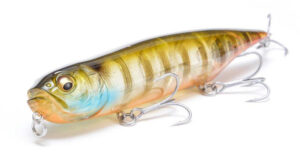 We’re pretty excited about the new Megabass Diamante. This bait was designed to be able to walk easily on super long casts with a really sharp cutting action that is unparalleled among other walking baits. Because of the way it knifes through the water causing a commotion, it can be worked extremely fast which makes it more than ideal for covering water quickly, fishing around schooling bass and getting reaction bites in clear water. Because of the way it cuts it will start walking on the first twitch of a long cast and that sometimes makes all the difference in the world. A lot of walking baits slide for several twitches of the rod before they get into their cadence. If you’re fishing clear water or say fishing for bass around spawning areas. You want the bait to land in there in quietly around them from a long distance away. And you want it to start cutting perfectly on the first move of the rod. That’s what this bait was designed to do.

Some of the colors are just incredible. We really like the bluegill color. It will come in both a rattling version and a silent version. We’ve fished it some already and cannot wait to get around some bass this spawning season.

Freedom Tackle wanted to create a vibrating jig, so they teamed up with the top vibrating jig manufacturer in the world with Z-Man to produce the all new Chatterbait Freedom vibrating jig. This jig will offer anglers the patented Chatterbait blade, direct attachment crucial to a vibrating jig operating correctly, and the ability to have a free swinging VMC X Long Wide Gap or hook or other hook of your choosing with Freedom’s interchangable hook and head system. So anglers can now have the best of all worlds, while being able to make a chatterbait completely weedless by pairing it with your favorite trailer Texas rigged or texposed on the hook. The new completely weedless design could give anglers a lot more options with Chatterbait vibrating jig applications this season.

The new Livingston Lures offers a unique “spin” on the traditional twin spin topwaters. This bait features high-quality blades and rotation points on the front and back but more importantly their EBS sound technology that will emit sounds from a custom accoustic chamber to mimic wounded baitfish. So not only will it attract bass with it’s commotion, it will still attract them while it sits motionless. This could make this topwater a deadly combination fishing for bass around the spring time spawn or cruising around bream beds in the post spawn period as well as later in the fall when fish are herding baitfish in the creeks and schooling on top.

You can check them out here

The NetBait Contour worm features changing contours allow for a revolving influx of light penetration. The contours mixed with the light penetration cause this worm to appear to “light up”. This worm is said to have a tantalizing silhouette with the high-quality appearance of hand pours but with the added durability of injection-molded baits. The Contour Worm is designed for finesse applications such as on a drop shot, shakey head or Texas rig. It’s available in 3.5, 4.75 and 6-inch sizes. It will be available for purchase at the Classic expo in the Dick’s Sporting Goods booth and in stock at Tackle Warehouse within the next few weeks.