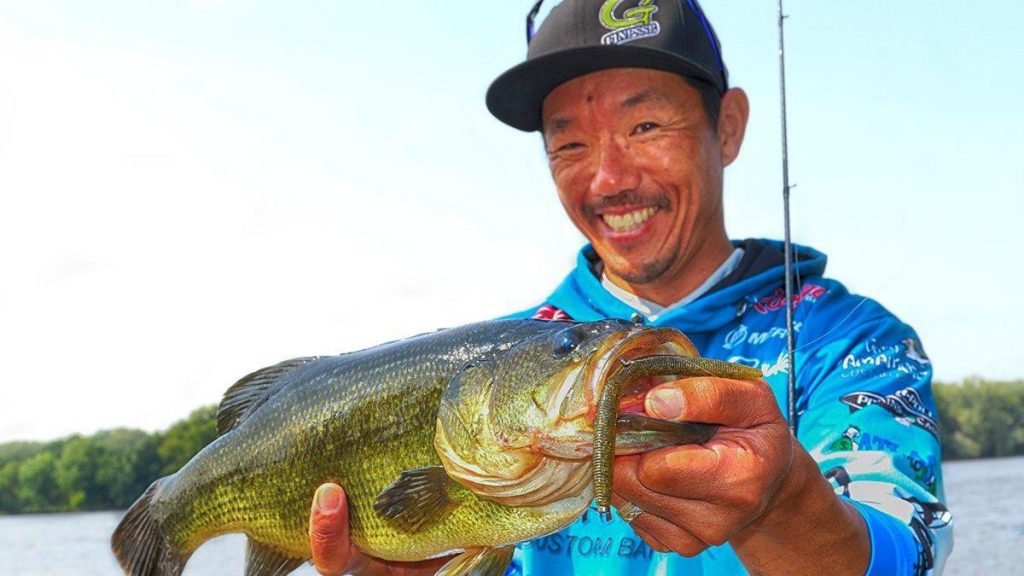 FLW Tour pro Shin Fukae tells me the correct pronunciation of Neko rig requires a short “e” sound like “gecko,” rather than a long “e”, as in “week.” Given that Fukae hails from Japan, where the rig originated, I’m following his lead here; as well as his tips on rigging this straight-up bass fishing catcher for better hook-ups!

In simplest terms, a Neko rig is a wacky rig with a nail weight in the nose, which makes the rig fall head-first, rather than descending somewhat evenly. For efficiency, Fukae uses a G-Seven tungsten weight (imported from Japan) that looks more like a screw with exaggerated threads.

“Sometimes, when you skip a Neko rig under a dock and it hits a piling, a (standard) nail weight can come out of your bait,” he said. “But this weight grips the plastic so it stays in place.”

Next on his preference list is a super-sharp hook with strategic qualities. Fukae fishes his 5- or 6-inch Yamamoto Senko on the Gamakatsu G-Finesse Weedless Wacky hook (expected availability, early 2018) for its long point and proprietary Nano Smooth Coating, both of which promote efficient hook sets; along with titanium weed guards the won’t bend or break when fished in cover.

As Fukae notes, hook position greatly influences hook-up success. Traditional Neko rigging finds the hook tucked under an O-ring, with the shank facing forward. This makes it easy to fish similar to a Texas rig, but the angle may impede hook sets.

Fukae finds he gets better hook sets by using a traditional wacky hook placement with the point run through the worm in perpendicular fashion. The only downside here is that the force of skipping a nail-weighted worm and the trauma of a fish bite typically rips the worm. 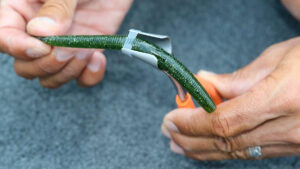 The solution for Fukae was to replace the standard O-ring with a G-Seven silicone tube that he gets from Japan. The company also makes tube-spreading pliers with jaws that expand when the handles are squeezed (another version of opening pliers here). Loading a tube onto the narrow arms spreads the material enough to slide it onto a worm; and releasing the arms collapses the material so it grips firmly.

“If you don’t have the silicone tube, sometimes you only catch one fish on a bait before it tears up,” Fukae said. “But if I put on a silicone tube, I can catch four or five fish easy. We’re going to save time and money and catch more fish on one bait â€” but don’t tell Gary Yamamoto.” 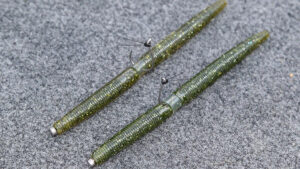 “Most fluorocarbon line is spooled with tension and that means the line is stressed,” he said. “This KVG line is spooled softly, so it’s smooth and easier to tie and it is not as likely to break.”

Cool note: Fukae says the word “Neko” translates into “cat.” He thinks it may have originated with a guy using the rig to play with his feline pet. We have no confirmation on this but again we’re following the lead of this over-qualified source. 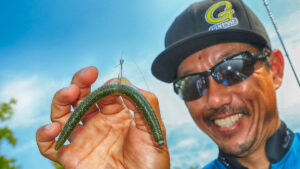 More videos and articles on the Neko rig

How to Catch Big Bass with Beefed Up Finesse Baits

An Introduction to Neko Rigging for Overfished Bass

How to Rig the Neko Rig and Where to Fish It 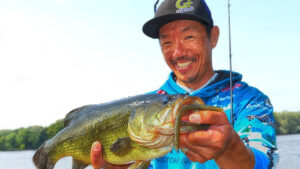